How to fix the Bunker (no, really)

“The Bunker was introduced to provide NRL review officials with world-class technology and enable them to deliver more accurate, efficient, consistent, and transparent decisions.”

These words, taken from NRL.com, have been consistently used to justify the use of the Bunker since its inception in 2016.

Under the frequently asked question of why the Bunker was introduced, those exact words are used again – accurate, efficient, consistent and transparent decisions.

The NRL took some time to implement the usage of the bunker and ran appropriate in-game trials during regular season games. In 2015, Todd Greenberg, in spruiking the Bunker, was quoted as saying, “This is about fans. It’s about giving them a product they want to watch.

“To do that we want the ball in play, and we want the game being played more continuously.

The efficiency of the Bunker, for the most part, cannot be questioned. Time taken for decisions during initial trials showed a steep decline, resulting in a three-minute saving throughout a typical game and more change this season has seen a greater emphasis on behind the scenes reviews.

This is no mean feat but was largely achieved by the Bunker’s impressive 57-screen set-up which was a big improvement from the at times single screen available at some grounds. 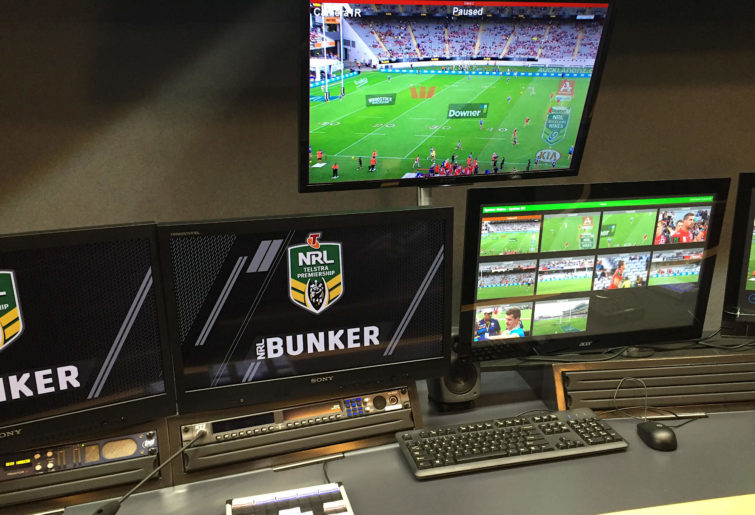 Where the system is currently not living up to a high standard is the consistency and transparency of decision-making.

I have intentionally set aside the accuracy of decisions as I genuinely believe that 100 per cent accuracy as a goal is unattainable because of the variable nature of live sport.

What is attainable is a better sense that the Bunker is delivering on the transparency and consistency of decision making.

The main question that must be asked as part of the improvement of the Bunker is what its level of authority should be.

Remember that the Bunker is just a location, and is now run by one individual (rather than when two review officers were responsible). Why has the NRL decided to put so many eggs in this basket in Eveleigh, but not trusting of the official at the ground?

This is the issue in a nutshell: the NRL has overseen responsibility creep – the Bunker is quickly becoming an all-seeing, all-knowing authority in the sky, and that’s a problem.

So how can the NRL improve the issues with the Bunker?

Funnily enough, the issue could be rectified by reverting back to the protocols that have previously been in place – that the Bunker can only overturn a decision if there is clear evidence to do so.

And this is where the NRL, or probably more realistically the referees’ boss, needs to lean into the idea that the referees on the field are the most qualified to make the decisions.

Understand this: despite all of us claiming otherwise, referees understand a great deal more about the game than all of us, former players and coaches included.

So, it is no surprise that a vast majority of the decisions they make are correct, or at the very least, not wrong – and that’s the kicker here.

The protocol for recent seasons before 2021 was for the soft on-field decision to go up to the Bunker, which is a sound concept.

See, it was confusing. But it doesn’t have to be.

Imagine for a moment a close try in the corner – the referee awards a try (after checking the touch line with the assistant) but the official in the Bunker is less than certain and asks for a halt in proceedings.

First viewings are inconclusive, but there is an angle that is a bit iffy.

Instead of an overturn, the Bunker should provide this view to the referee on the big screen and the decision can be made – with the final decision being for the on-field referee, because at the end of the day, the referee will often hear and see more than any camera can.

Or even better, keep it simple and go with the on-field decision unless it is obviously incorrect – and follow these rules every time.

This back and forth makes for a much more transparent process and having the process itself improves consistency, maybe not between games, but at least within a game.

Because maybe the Bunker isn’t meant to be blown up.