The relief was palpable among Tigers fans after being destroyed by Melbourne on Saturday night – and not only because the loss wiped out the scant remains of the club’s season and soul.

There was an even greater positive to come from their colossal thrashing, one more comforting than the 50 points conceded that extinguished any anxiety of a possible premiership.

By digging in their heels to keep the Storm below triple figures, Michael Maguire’s men finally showed some true courage to save the club’s blushes with a gallant 66-16 defeat.

While naysayers had the knives out for the joint venture following the history-making rollover, optimists were celebrating the club’s new accomplishment of somehow being flattered by a scoreline despite losing by 50.

With the Storm posting five tries in the opening 15 minutes, grim forecasts for margins were being made early, as the Tigers looked like mozzies in front of a Mack Truck with its brakes cut.

This was despite pockets of the Tigers faithful being delighted with their side’s early possession rate of 17 per cent, admitting it was nice to finally see the boys focusing on their defence.

But as the defending premiers entered the sheds at halftime nursing a comfy 40-0 advantage, many believed the only thing that could save the away side a triple-figure thumping was full-time or a safety ramp.

Fears were further fanned when the Storm resumed their relentless beating after the break, causing Tigers fans to contemplate St George’s 91-6 caning of the Bulldogs in 1935, and how nice it looked in comparison.

Thoughts of eternal shame grew further as Craig Bellamy’s men kept their foot to the floor, especially with their enthusiasm reignited after discovering an opponent more resilient than the Tigers – the clock.

However, this charge was halted by a late show of heart from the James Tamou-led side, with 16 junk-time points saving face and ensuring Bellamy’s indignation at only winning by 50.

Being valiantly lapped by a record margin is the latest in a season of woe for Wests, one that has witnessed the highs of defeating the Panthers’ reggies side all the way down to the lows of reality. 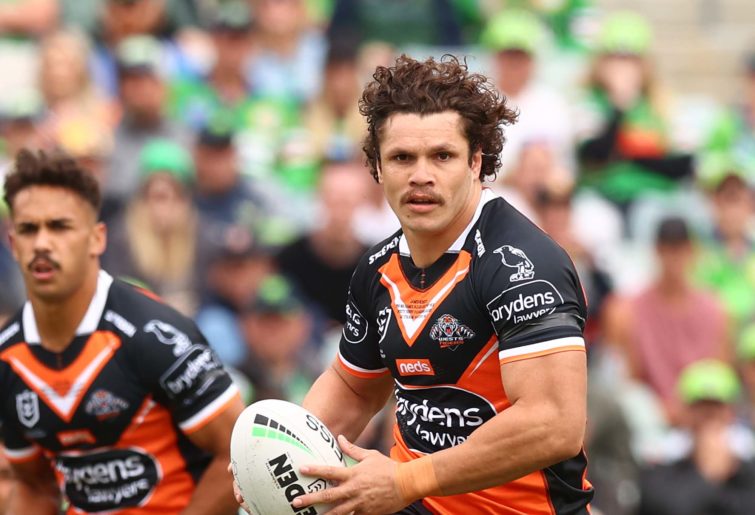 James Roberts of the Tigers (Photo by Mark Nolan/Getty Images)

But even after arguably being in the contest against Melbourne right up to full-time – as nobody in the Peter V’landys era can truly rule out the snap introduction of a 52-point field goal – the crushing loss was a new level of ‘Tigers’ not seen since being sunk at Leichhardt Oval by a Paul Gallen field goal.

It has been an era to forget for the joint venture, with a torrid finals drought punctuated by years of haemorrhaging cash on bad investments like a bored dot.com billionaire.

This has come from an inability to attract genuine talent, an issue that reached a crescendo when Latrell Mitchell knocked back the club’s offer of $1.1 million’s worth of fullback money after realising it was still Wests Tigers money.

But all is not lost in 2021. The club has an abundance of unreasonable scapegoats it likes to lean on including Luke Brooks, Justin Pascoe and the Western Suburbs/Balmain boardroom factions, the latter which can only be quelled by constitutional reform or Harry Grant.

Now joining this illustrious club of patsies is Maguire, who through no fault of his own has managed to advance nothing at the club except his crow’s feet.

All that is left to complete another typical season is for fans to demand his sacking, then for him to leave and excel at another club, which they can then blame on Ivan Cleary.