It’s Bill Harrigan’s fault the NRL is in the mess that it is.

Not really, but hear me out…

Greg Hartley and Barry Gommersall would be in the running, but the way Harrigan refereed games actually changed the way the game is played.

Harrigan reffed his first NSWRL game back in 1986.

In his very first game in charge, he sent Wests Magpies’ Allan Fallah to the sin bin for repeated scrum infringements. It was a sign of things to come for the man who went on to officiate 392 first grade games, ten grand finals, 21 Origins and 25 Tests.

While he’d eventually become known as Hollywood, he built his career on being a hard arse, not afraid to penalise the daylights out of teams, march players or even send coaches off, as Phil Gould discovered in 1994.

Lucky Bill. How many of us wish we could give Gus his marching orders? 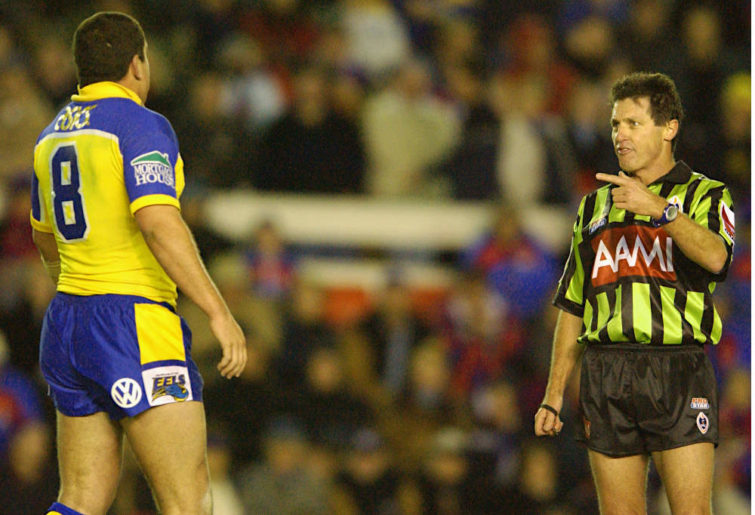 Plenty remember the late Bob Fulton saying to Bill: “Harrigan, I hope you get hit by a truck. I hope it’s a cement truck.”

But how many people remember the incident that inspired the tirade?

Harrigan warned Manly halfback Des Hasler that he’d been feeding the ball into the second row.

Des thought he’d test the young referee and fed the ball straight into the second row.

Then Harrigan binned him.

Whether you’re raising kids, training a dog or apparently refereeing a rugby league game, if negative behaviours aren’t met with consequences, the behaviour is reinforced.

I don’t know if that was Harrigan’s approach to refereeing but it certainly looked that way watching him.

Harrigan built his reputation on that toughness and willingness to follow through on his threats.

By mid to late in his career, he could trade on that reputation and referee accordingly.

With his extensive experience, he knew which were the penalties he had to give and which ones he could let slide. Players would listen to his warnings because they knew if they didn’t, Harrigan would follow though on his threats.

As a result, there were some absolutely cracking big games under his charge where the game would flow and be played at a breakneck speed.

Harrigan would maybe blow a penalty or two early to set the tone but would largely put the whistle away, relying on his warnings and reputation.

We’d get games where only two or three penalties were blown, but the players would self-regulate because they knew Bill wouldn’t cop any nonsense.

The problem came when administrators assumed this low-penalty, minimal intervention, coaching players, letting the game flow style of refereeing was the way the game should be officiated by all referees, ignoring the fact Harrigan had earned the right to this style through years of building his reputation and credibility with players.

All of a sudden, we had 20-game referees whose knees were still knocking screeching: “Braith, Braith, back with me, Braith,” and “Jamie, I’ve warned you twice, Jamie. I’m not afraid to sit someone down, Jamie,” and trying to let games flow with minimal intervention, but at the cost of control.

We had created a generation of referees who put the whistle away, thinking this was the path to success.

Ignoring fundamental rules of the game in the name of… interpretation. Yep, rules were out of vogue in favour of ‘interpretations’ to let the game flow.

Wind the tape forward a decade or so and this culture of referees being seen but not heard had progressed.

When the game decided a crackdown was required to stop players holding down in the ruck and standing onside – you know, basic rules of the game – players, coaches, fans and media were so not used to the idea of rules being enforced that they claimed referees were ruining the fabric of the game, had no feel and were ruining the contest.

Skip forward a few more years – rules had become so unenforceable that we needed to scrap them and create new ones.