That was the first of two matches that may very well define the Bombers’ year.

The youthful Essendon side went up against the ladder-leading Demons and while there was a pervading sense of optimism surrounding their performance they were unable to get the job done against the bigger bodies of Melbourne and their stronger defensive structures.

Read on for my takeaways from the Bombers’ Round 15 performance.

Battle of the blue-collar defences
This game was billed as what happens when an unstoppable force hits an immovable object. The Essendon forward line had been potent to this stage of the season, while Jake Lever and Steven May are in All Australian form.

It was more a battle of the defences however, with both forward lines failing to gain ascendancy early. The Demons were able to dominate the interceptions and the Bombers were able to pressure the ball in transition. It was a game of contrasting philosophies as each side had positives to take out of the game.

Jordan Ridley and Mason Redman are quietly beginning to put together very solid seasons down back for the Bombers, while Ridley’s stats are somewhat inflated given that he takes the kick outs for the Bombers.

Furthermore the improvement of James Stewart as a big, bullocking full back has been exponential as he was able to use his athleticism and reading of the ball to negate Tom McDonald’s potency.

Unfortunately, the weight of entries was too much for the Bombers to handle as the Demons got on top in the third quarter and the Bombers’ ball use heading inside 50 was putrid in the last quarter.

He may have started his career as a half back flanker with a view to going into the guts but Heppell is rejuvenated by a return to his old role where he can provide leadership to a young Bombers back line that desperately needs it.

The one criticism I would have of Heppell and his back line compatriots is that they’re a little one-paced, which is in stark comparison to how they were last season with Conor McKenna and Adam Saad manning the flanks in that half back role.

However, despite that, he does make the Bombers a substantially better side and Saturday night was no exception with 26 disposals at 100 per cent efficiency. When the Bombers were butchering the ball going inside 50, Heppell was the portrait of composure.

That double-50 penalty…
Now I’m normally fair and even handed when it comes to the umpiring (sarcasm), but the umpiring across the AFL has been putrid this round.

An incident in the third quarter sticks out in my mind, when Archie Perkins was paid a 50 against him for infringing on the protected zone despite not being provided the typical ‘clear out’ warnings that you’d expect from the umpire. Then another 50 when Devon Smith gesticulated with the umpire. It is penalties like this that are ruining our game.

Then to make matters worse in the fourth quarter Tom McDonald did something similar but the umpire failed to do anything about it. It is inconsistencies like this that are ruining the game and it may not have cost the game, but it has done in the past. The fact that we are tolerant of such ineptitude in the umpiring department and the rules committee shows the head office of the AFL do not have a feel for the game.

This isn’t to take anything away from Melbourne, who were the better side, nor is it to be too personally critical of the umpires, who are just doing their jobs. But there is no transparency with the system, and while I’m not advocating for equal amounts of free kicks to be given, the inconsistency of the umpiring is infuriating and needs review at the end of the year.

Bombers’ ball use
I don’t enjoy using these columns to be too critical of the Bombers here but the Bombers’ ball use going inside their forward line was atrocious. They had 17 inside 50s in the last quarter as their entries were characterised by long and high entries.

One more thing: Jake Stringer
The Bombers may not have taken the chocolates against the Demons but Jake Stringer has begun an ascent to rival that of Darcy Parish. With 24 disposals, five tackles, one goal and seven score involvements, it appears Jake Stringer is relishing the greater opportunity in the midfield that was promised when he came over from the Bulldogs in 2017.

The Essendon midfield still require a bigger body. Standing at 192 centimetres and 91 kilograms, Jake Stringer can play that role. Much has been made of the Bombers’ young brigade this year but the improvement out of the elder statesmen of the Bombers is just as good.

I hope that Stringer is able to extend sooner rather than later and the Bombers can experience the ultimate success. In keeping with the trend from the match, Stringer looked like he was trying to do too much as he blazed forward rather than using the options available via hand rather than foot. I can’t help but question if he is trying to show his wares to start something of a bidding war before he is out of contract at the end of the year.

Melbourne did not play like the ladder leader should. They played an ugly flood style and had the rub of the green egregiously so, but that’s not to take anything away from them as my Bombers could not take the match by the throat and win.

The Bombers played into their hands and enabled the Dees to shut the match down. However, as has been said on many a Bombers podcast, this year is a development year and it’s about seeing the hope and assertiveness that can serve the Bombers well in future.

The Bombers’ season is definitely an A+ in my book.

Essendon 2022: Is there room for one more explosive centre?

Right about now, as the Bombers lick their wounds and hear from Blake Caracella and Ben Rutten about how this elimination final will not shape next season, we come to think about what they have done this year and what key ingredient could be missing.

Essendon 2022: Is there room for one more explosive centre? 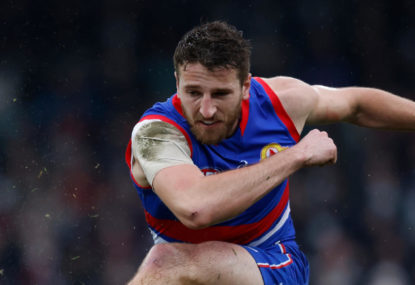