Last man standing: Can Tate McDermott seize his day against the French?

Unavailability and injuries have already settled like a swarm of locusts over the summer rugby tours.

The British and Irish Lions have lost their captain, the redoubtable Alun Wyn Jones, for a large portion of their trip to South Africa before he even stepped on the plane. They may even lose him for the Test series itself.

The French, meanwhile, are sending a youthful if dangerous ‘B’ team to Australia, shorn of the players from the two Top 14 finalists – Toulouse and La Rochelle – whose quarantine period would have eaten into the middle part of the tour.

Selection from other top clubs, like Racing 92, has also flipped on its head. Promising young back-ups at the Parisian giant, like Ibrahim Diallo and Fabien Sanconnie in the back row, and Teddy Iribaren at scrum-half, are in. Established Test stars like Camille Chat, Bernard Le Roux, Gael Fickou and Virimi Vakatawa stay at home to take a rest and lick their wounds.

Not to be outdone in the underdog betting, Australia has responded in kind. At a stroke, their likely starting midfield of Nic White at 9, James O’Connor at 10 and Matt Toomua at 12 looks like being removed from the equation.

Dave Rennie has already confirmed White is gone for the series: “He’s done an MCL, so that’ll be four-plus weeks. That will count him out.”

Meanwhile, O’Connor and Toomua may both also miss the first Test, on July 7.

With NSW halfback Jake Gordon still on the mend from a knee injury, Queensland Reds number 9 Tate McDermott is the last man standing at scrum-half.

It is unlikely that he would have been Rennie’s choice with everyone fit and raring to go. Before the start of the 2020 Bledisloe Cup, the Wallabies head coach had this to say about the choice at scrum-half:

“Nic White is really experienced, obviously he’s come out of the Exeter program for the last three years. One of the strongest clubs in Europe.

“He’s really added in that [leadership] area as well. With Hunter [Paisami] and Filipo [Daugunu] on the field, we thought it was important we add a bit of experience around them…

“I thought Tate was excellent for the Reds, he’s a real impact player and [has the] ability to attack.

“In the end we looked at Jake, who has a better kicking game. We figured that would be really important in pressure situations. There’s not a lot between those guys.” 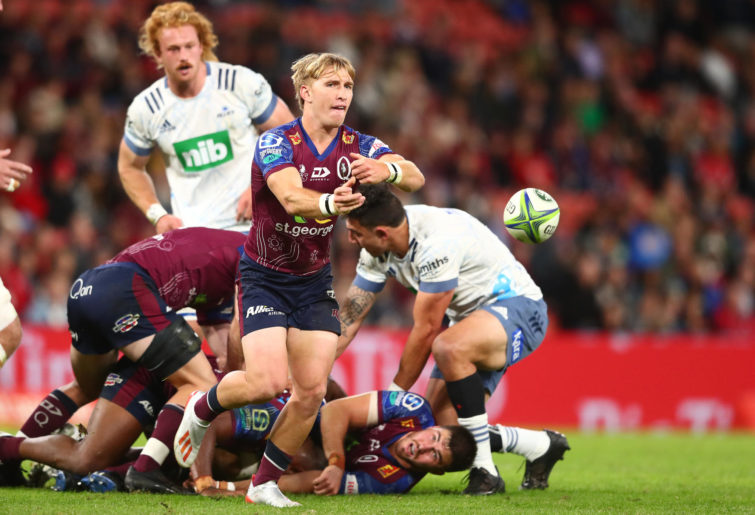 If McDermott starts for the Wallabies, it changes the balance of responsibilities significantly. With White in play, Australia kicked more off 9 than 10 in the 2020 Tri-Nations.

White averaged seven kicks per game for the ACT in Super Rugby AU, McDermott averaged four for the Reds.

So there will be change that will probably entail more passing or breaking from the base by McDermott.

Breaking should not be a problem for him, as Rennie hinted. The stats from Super Rugby AU support the coach’s comments, with McDermott averaging 0.75 breaks per game to White’s 0.13, and 1.38 key passes (break or try assists) to White’s 0.88.

It is possible to refine that assessment further, by looking at the quality of a scrum-half’s contributions on his ‘wrong’ side. For a halfback that is typically to his right, where he has to pass off his weaker hand. Even Wales legend Sir Gareth Edwards had to turn his back to the opponent and spin pass off his dominant hand to get the ball to Barry John.

Like Sir Gareth, McDermott breaks naturally out to his right. He was especially ‘electric’ (to use Rennie’s word) on the scoot in the Reds’ final Trans-Tasman match against the Hurricanes. He can engage the first defender at ruck-side and put support players through the holes, inside and outside:

In all three examples, McDermott first uses his running threat to pull the inside defenders away from the space he wants to attack, then dishes the ball off to his support at the right moment.

He has also developed a nice relationship working in tandem with the Reds’ number 8 Harry Wilson, who is likely to also start against the French; either dropping the ball off to him coming late around the corner of a ruck…

… or working together at the base of the scrum or breakdown:

Wilson pancakes his man at the ruck and McDermott sees the opportunity to scoot down an unguarded short-side immediately.

The running is not the issue. Distribution from left to right is much more of a concern moving forward, especially if Rennie wants to pick two playmakers at 10 and 12, and attack off the second and third pass against France.

After the Reds’ one and only Super Rugby AU loss, against the Force, I looked at McDermott’s vulnerability to disruption around the base when preparing to kick or pass.

Slick passing from the base helps immeasurably to open up the field in both directions. Having a 9 who passes well off his left hand, with minimal lift, or time wasted taking steps towards the target receiver, is a big advantage in that respect.

Excellent left-to-right passers like Aaron Smith and the Harlequins’ Danny Care can get extra length on the ball, while maintaining speed through the air and a flat plane on the delivery:

Play moves either to the edge, or into midfield, far quicker in such instances and creates more stress for the defence.

When McDermott passes straight off the deck, his range is short and the target receiver has to stand no further than six or seven metres distant:

These two phases occurred after Filipo Daugunu and Isaac Henry had made deep inroads down the left-hand side, with the play starting on the Reds own 40m line.

In both instances, the receiver is standing so close to 9 that he has no choice but to take his first step back inside as the rush comes – there is no possibility of working the ball further out towards midfield or the right wing: 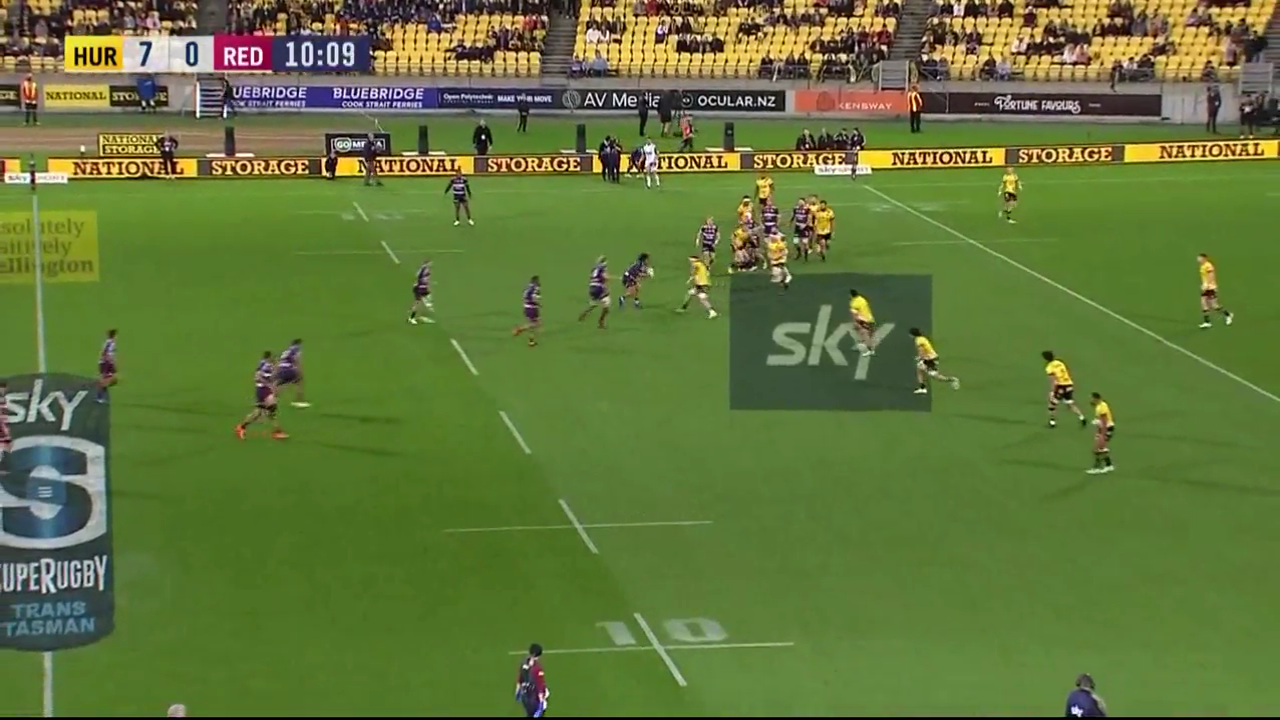 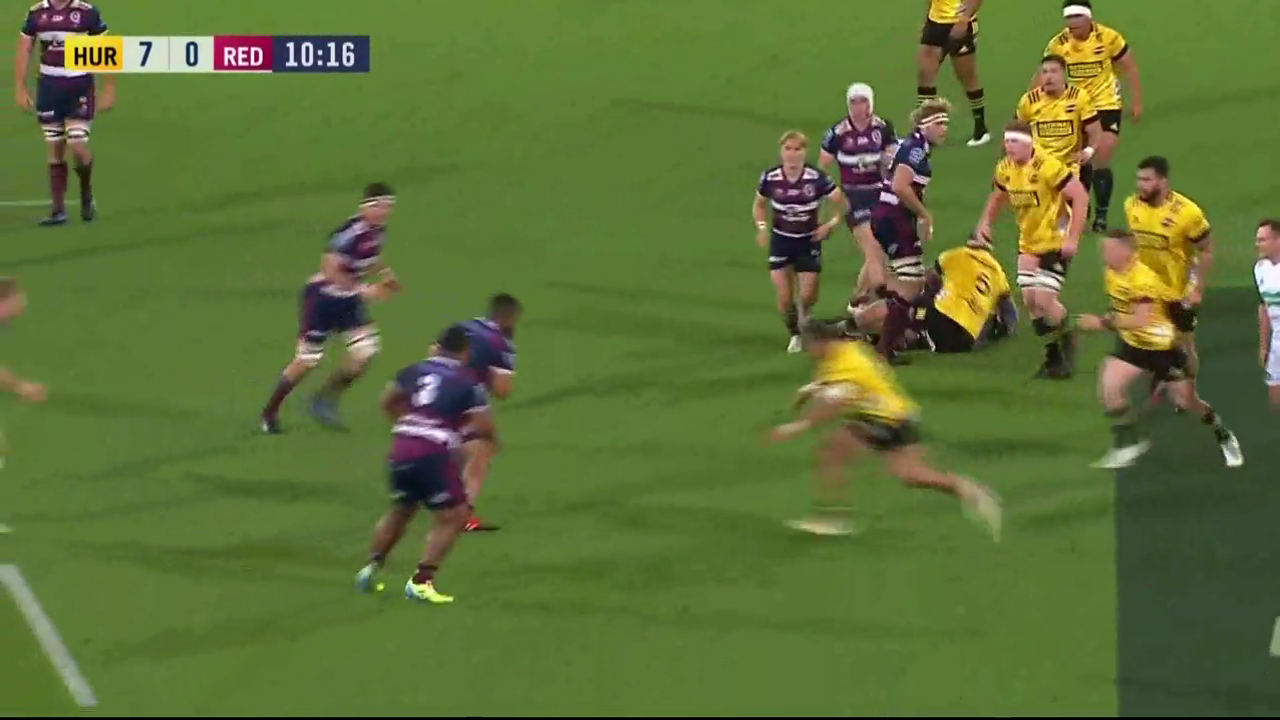 Even shorter deliveries are often accompanied by a lift of the ball off the floor:

When greater length is required to reach the target off his left hand, the lift is more accentuated and McDermott starts to run towards the receiver:

By the time Bryce Hegarty receives the ball back in the pocket with the defence in his face, his kicking options are drastically reduced: 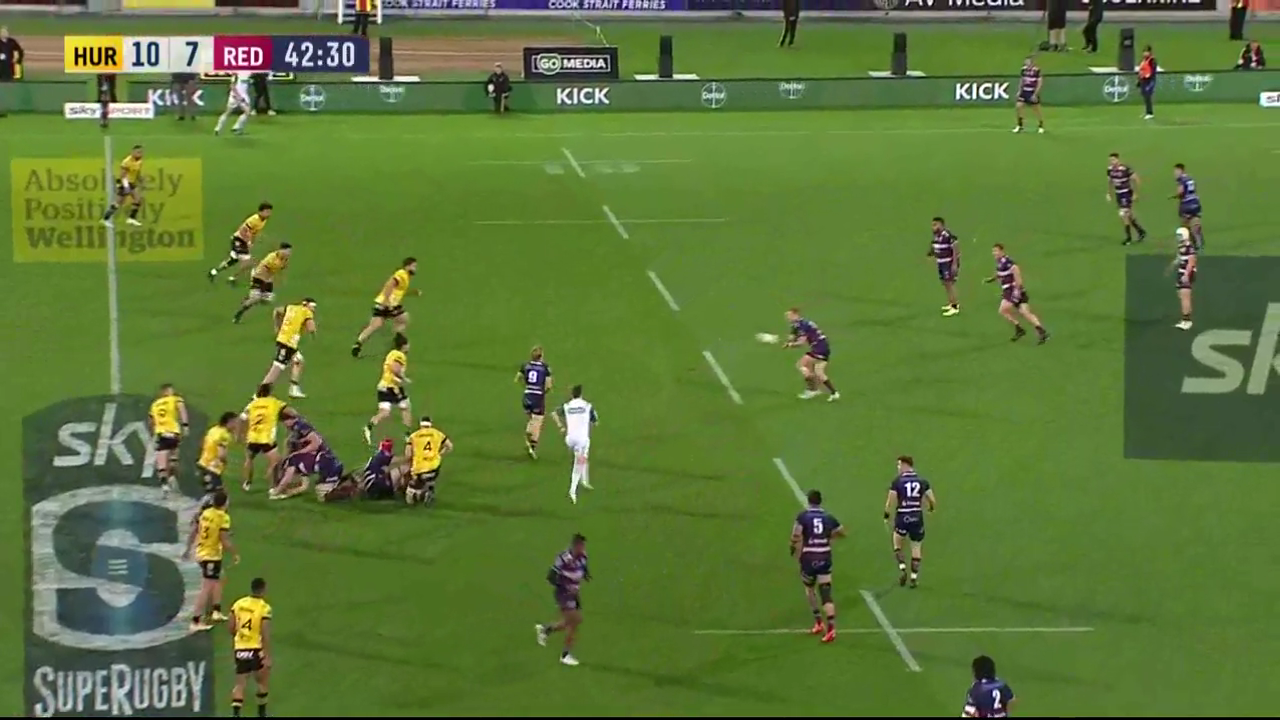 Jordie Barrett was able to break on the kick return and set up the scoring sequence in this play.

The impact on the Reds’ kicking game was not an isolated instance:

Hegarty was forced to stand so deep at first receiver that passing moves had to be performed too far from the gain-line for them to be effective:

Although he beats the first tackler, Mac Grealy is barely back to a line level with the previous ruck before he is dropped, and relieved of the ball for good measure.

Summary
France were already missing Antoine Dupont, Baptiste Serin, Romain Ntamack, Matthieu Jalibert and Gael Fickou from their tour party to Australia. The uncertainty around the Wallabies’ selection at 9, 10 and 12 caused by injuries to Nic White, James O’Connor and Matt Toomua makes the outcome of the July series even harder to predict. It will be one unknown midfield quantity facing another.

O’Connor and Toomua may at least get to play in the final two Tests, but White is out entirely. With Jake Gordon also sidelined, the Reds’ Tate McDermott has a gilt-edged opportunity to make the green and gold number 9 jersey his own before the World Cup in 2023.

CHECK OUT THE CURRENT WALLABIES SQUAD AHEAD OF THE SERIES OPENER 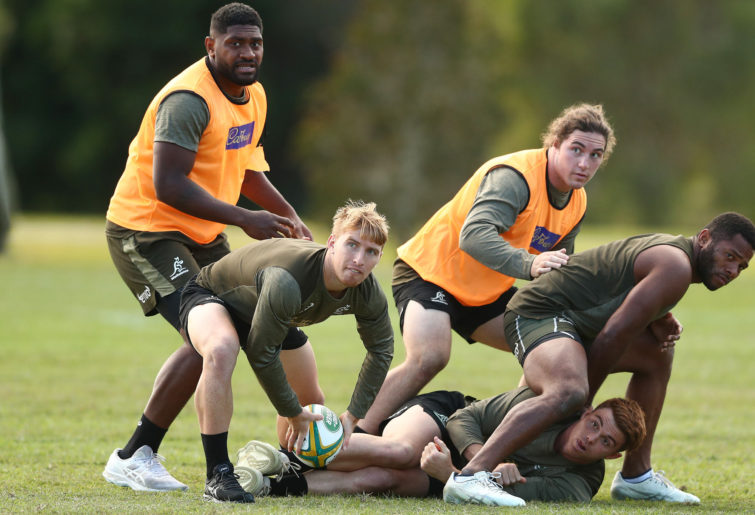 There is not much doubt that he will pose just as much as threat as White close to the ruck and set-piece, if not more. The real questions are about his ability to shoulder more of the kicking burden, and most importantly, to clear the ball quickly and effectively from the base.

With Australia looking to field two playmakers at 10 and 12, it is essential that the 9 inside them offers extra speed and length on the pass. This is where the test will come for the young Queenslander, especially when distributing the ball off his left hand.

If his delivery shortens up the attack, or he starts running towards the receiver when seeking extra length, it will spell trouble for the Wallabies against a defence coached by Shaun Edwards. It is never too late to begin channelling Aaron Smith: not so much the last man standing, but an automatic first choice, staying low and punching the ball away off the deck with real zip and meaning.