The disrespect of women in rugby league must stop

Even during a weekend full of things to cheer about in the world of rugby league there always seem to be those who want to put a stain on the game.

No, I am not talking about the Ronaldo Mulitalo fiasco (sheeeesh) or New South Wales having a practice run against Queensland on Sunday night (ouch!).

What I’m referring to is the silly putdowns any woman in the game of rugby league cops when they seem to make significant steps forwards to improve the game.

Two things in particular really stood out to me this weekend.

On Friday night the annual Women’s State of Origin game was played. Yes, it was a low-scoring affair, but some of the talent and skill displayed in that game was incredible. 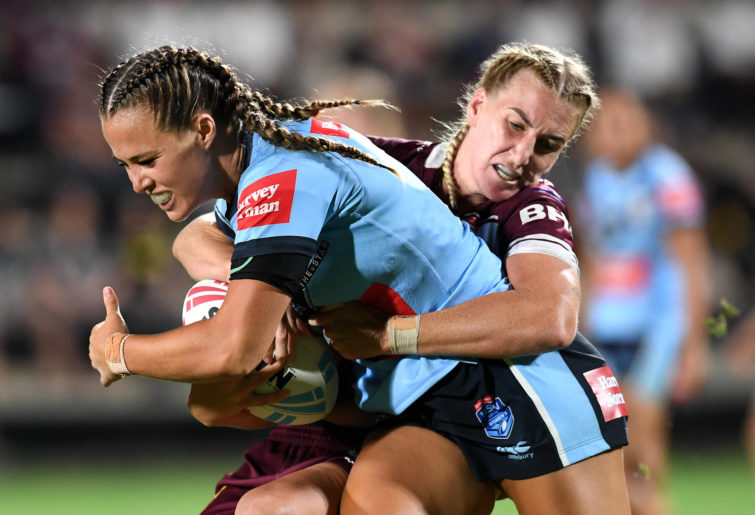 Some of those hits dished out from both sides, especially from NSW captain Kezie Apps and Queensland hitwoman Tazmin Gray were brutal. I thoroughly enjoyed the game, and I’m enjoying the progression of the game, especially with the expansion of the NRLW competition.

But despite them putting it all on the line, some of the social media comments were in rotten taste, putting the players down for not being able to score more than ten points, asking why women were playing footy instead of undertaking other ‘homely’ duties et cetera. I don’t need to go on to paint this picture, but the disrespect was huge after what I considered to be a fairly entertaining game.

Let’s flatten one thing out: any of those so-called men commenting wouldn’t talk if they copped a hit from either Apps or Gray, I can assure you!

The flair and speed from players like Tamika Upton, Jessica Sergis and Isabelle Kelly and the toughness in carries showcased by my personal favourite, Tiana Penitani, were immense. I thought the game was a testament to the progression of the women’s game and how far developed they really are. The keyboard warriors really need to give them their flowers.

The second thing that stood out to me was the appointment of Yvonne Sampson as co-host of NRL 360.

Let’s not mess around here: in terms of controlling a panel on Channel Nine or Fox Sports, there is no-one better than Vonny. She holds a panel well, she angles her questions to the right people at the right time and she is always professional in her approach.

The fact people were annoyed by the fact it was her and not a man or possibly another female counterpart shocked me. Lara Pitt comes to mind, but to be on that panel, which is quite fiery and fiesty at times, I thought Vonny was definitely the best choice they could have made.

The scream for a male panelist, with some critics claiming that it should and always will be a ‘male show’, was a confusing one for me. Does Vonny have the background Ben Ikin did? No. But does Paul Kent or James Hooper? They’re as credible as Vonny, if not less.

To shun female involvement is just ludicrous. The fact is that women will get their feet into this sport, whether the public like it or not. When it is due, this should be respected and applauded. In these instances these two cases deserved to be applauded, not shunned.

Job well done to all.