The Boomers’ Olympic campaign has started with a bang. You can thank a rampant Patty Mills for that.

After what seemed to be a game headed for a dog fight in the final quarter, Mills broke the backs of a sluggish Nigerian team with precision perimeter shooting (five-from-seven) and 25 points during their Olympic opener at Saitama Super Arena.

“[We] obviously didn’t play as well as we would have liked,” Mills said post-game. “[But] what we’re trying to do here is team effort and everyone playing their part, and that’s what we did today.”

It wasn’t all smooth sailing for the Boomers. They were made to work for the 84-67 win. When they played Nigeria in the Las Vegas exhibition matches, they routed them by 39 points. This game was anything but. Scores were tied at 21 at the first break and by halftime the Boomers were marginally ahead by three after jumping out to a lead as large as seven. 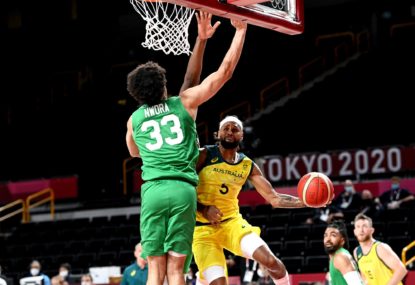 Patty Mills was immense against Nigeria (Photo by Getty Images)

Even the 15 to 12 third quarter, a term the Boomers won, was made longer from a shot clock technical issue that caused a five-minute delay in the game. It was far from impressive from an offensive standpoint. But the longer the game went the better the Boomers got and were able to execute on opportunities created through a collective and stingy defence.

It was Mills though who remained composed throughout the game, even during periods of turbulence when the Boomers struggled for rhythm and connection.

There were a combined 46 turnovers for the game: airballs, mishandled transitions, errant passes that turned up out of bounds. But in among that rubble was the cool head of Mills who seemed to step up when the Boomers needed him to shift momentum.

When the game was on the line, he simply took over. The 32-year old used his experience to drive to the rim, draw fouls and tick the scoreboard over at the free throw line. Mills ended played 34:32 minutes – the most of the Boomers – with an efficient 43 percent from the field and six-from-eight at the charity stripe on a night that included four rebounds and six assists.

“We talk about staying in the trenches together. That’s what this game was all about,” said Mills. “This is what this whole tournament is going to be about.”

After Mills, who ended the game with a +20, Matisse Thybulle was the next best with +19 on the floor, with five steals, four rebounds, seven points, a three and a couple of two-handed dunks.

For Nigeria, they stalled after half-time and couldn’t seem to generate a score, shooting only 27 for the half and 15 in the final quarter. They struggled at the free throw line all night going 12-from-24 and went 29 percent for threes. They looked flat-footed which prompted head coach Mike Brown to urge more movement at the three-quarter time break.

Jordan Nwora, fresh off winning the NBA Championship with his Milwaukee Bucks, was one of the few bright sparks for Nigeria. The 22-year old scored 10 points and three rebounds and kept the Nigerians within range.

The Boomers are set to play Italy on Wednesday in a top of the table clash for Group B, in yet another test of their will and hunger as they chase their first Olympic medal. 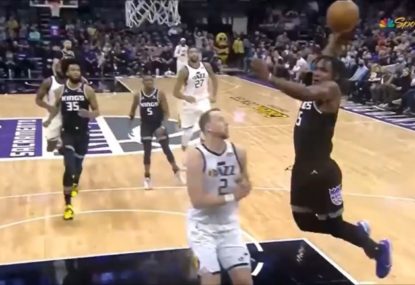