Wallabies coach Dave Rennie has stated that his side ‘could be number 1 in the world.’

Anything could happen but it’s going to take a committed coach and players to achieve it.

In one of his videos on Australian rugby, Squidge Rugby spoke about Baz Luhrmann who “once said that Australia had more of nothing than anywhere else on earth” specifically referencing Australia’s playing talent.

Australian rugby gets the leftovers.

Unlike New Zealand, England and South Africa who don’t have the great game of Australian rules football and only a small portion in England and New Zealand play rugby league they are able to have the likes of Beauden Barrett, Richie Mo’unga, Siya Kolisi, Owen Farrell spearheading their international teams.

Instead, we have well…… we have James O’Connor. Which to be fair to James is a very good player but Australian rugby just does not have the depth of talent to choose from.

In the 90s and early 2000s this was our advantage. We had a limited pool of players playing the game because we only had three professional teams.

Now the encouraging sign is that RA and Rennie are looking increasingly likely to bring overseas-based players such as Will Skelton, Rory Arnold back into the fold. Which is exactly what we need. Former Australian coach Alan Jones has been banging on about the point that we need to pick ‘the best Australian team’ whether they are based in Australia or not. The team also needs to be brought back to the simple fundamentals and fabric of Australian rugby. Keep the same team together just like the 1999 Wallabies team with a full-scale Queensland Reds forward pack and Brumbies backline.

Queensland Reds coached by Brad Thorn and Cameron Lillicrap have the best scrum in Australian Rugby. So why not keep them together in the Australian set up. Dane Zander is a very underrated scrimmager. Yes, Mafi has to work on his throwing, but he is one of the most dynamic forwards around and Taniela just picks himself. This front row will likely go up against the Springboks and English front row if we are to win the title. But these guys can seriously challenge them.

Michael Hooper does not feature in my starting pack let alone my World Cup squad purely because he will be 31 by the next tournament and to be honest ever since the WC, I have seen a genuine decline in his performance. He is not as dynamic as what we need in the current game. So unfortunately for what he has done for Australian Rugby I cannot see him lifting the trophy in Paris in my team.

Imagine this, 45 minutes into the World Cup final of 2023. Australia is playing France. The score is 9-all. There is steam coming out of Alex Mafi’s mouth, he is buggered. He acts on pure instinct and throws to the front to Lukhan Salakia Loto. There you have it. This is where the connection and cohesion once again comes into my logic behind picking this team. Lukhan and Harry Wilson would be my starting lineup jumpers even though you have Rory Arnold and Adam Coleman. Just because of their connection with Mafi they are able to effectively be able to act on instinct in pressure situations. 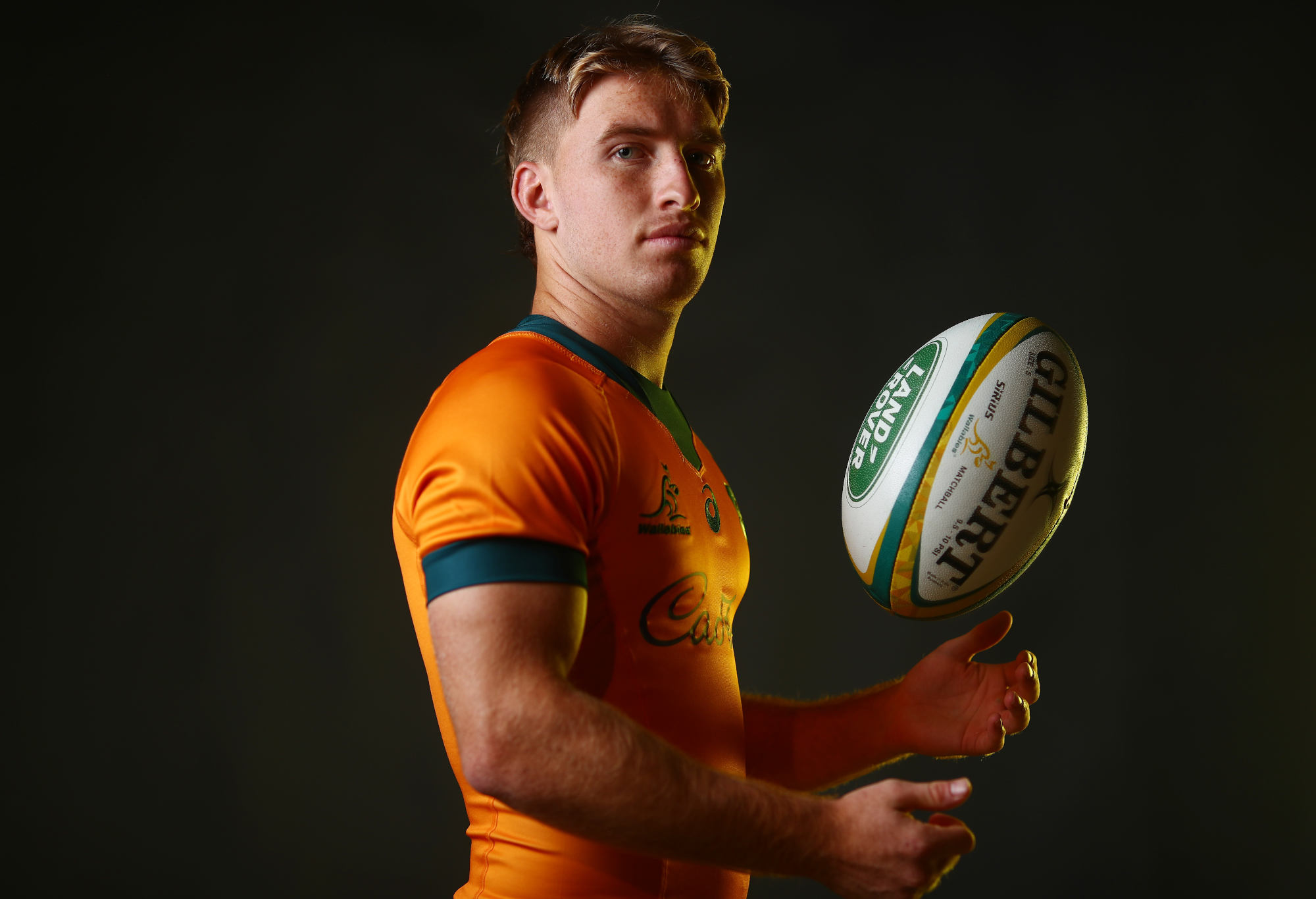 If ever you get onto YouTube type in Will Skelton- The Tractor highlights. The bloke is a weapon. 140 kg man mountain. Australia in the previous World Cup was missing this sought of player the player can carry and carry and get over the all-important advantage line. Adam Coleman on the other hand is an aggressive giant. It was a flip of a coin between Rory Arnold and Coleman to start but it landed on heads, so I went with Coleman.

Sean McMahon another overseas player is a big, strong, fast flanker who plays in the same vein as Pieter Steph Du Toit from South Africa. He is a strong ball carrier and line-out jumper who would be a valued member of the side.

Connection and Cohesion is ringing through my head with this selection. At the last World Cup Australia had a stupid amount of Half-back partnerships.

If I was Dave Rennie and Scott Johnson, I would be picking and sticking from the 1st test of the upcoming series against the French and take them to the world cup together. Don’t forget this half combination combined to win the Super Rugby AU title. James O’Connor would also be my captain. A man who has had to overcome adversity would typify the Wallaby resurgence. Gus Gould once said, ‘to pick a captain you have to imagine them holding up the trophy on the dais, and if you can imagine this in your mind then he is the right man for the job.’ I can see JOC lifting Bill.

Vunivalu, Petaia, Paisami, Suaalii, Beale. You would be licking your lips if you are an Australian fan. Scott Johnson needs to pull his finger out and do something. I mean one thing would be to tell Brad Thorn to partner Petaia and Paisami in the centres at the Reds. Ben Darwin who runs Gainline analytics said that centre combinations are so important. Because when you offload in contact as you do often in the centres you flinch in the process. This combination needs to be in place for the next 2-3 years. Beale brings something different a ballplayer who does not know what he is doing himself just acts on pure instinct. He can play a role where he can sweep and play more of a first receiver role like Jason Robinson did in 2003. So, O’Connor like Wilkinson can throw the final pass to score the try. Now I am not telling Rennie how to do his job I am showing a way in which we can use Kurtley’s freakish natural ability.

Vunivalu is a genetic freak you can see that from his very few matches played during Super Rugby AU. The fend off against the Force the run down. He easily fits into the side. Same with Suaalii. Joseph Suaalii is off contract with the Roosters at the end of the 2022 NRL season. We need a poster boy in Australian Rugby. He is your man. We had a chance last time around, here goes the second bight of the cherry. He wants to be a World Cup-winning Wallaby. Make it happen.

Lonergan dynamic. Alaalatoa and Sio very good scrummagers. Rory Arnold picks himself won a title only the other day with Stade Toulousain. Darcy Swain has the connection with Lonergan at line out time. Nick White can change the speed of attack when he comes. McDermott will make the defence react, but when White comes on, he will make them think. Reece Hodge’s long boot can win us a World Cup and Samu Kerevi is dominating overseas and can get us over the ad-line himself.

Angus Crichton grew up with a poster above his bed. Saying ‘I wanna be a Wallaby’. Instead of having wanna he crossed it out and put gonna be a wallaby. He to is off-contract at the end of 22. He would be a valued member of the squad and in particular Australian Rugby.

The best side will win the World Cup final in October 2023. I can see Rennie, O’Connor receiving their medals from French President Emmanuel Macron with World in Union in the background. Taniela Tupou is the best front-rower in the world, O’Connor is one of the best 10s. But because we do not have the best 15 players in the world in the one team like the All Blacks do, Australians need to pick and stick. If this happens Australia could very well prove Dave Rennie right.