NSW have copped another injury blow ahead of State of Origin 3 with Daniel Saifiti ruled out with a rib injury as the Blues chase a series sweep.

Saifiti played for 37 minutes in Newcastle’s 38-0 victory over North Queensland on Sunday but suffered a knock to the ribs that went unnoticed during the NRL game.

News of his unavailability only broke during Brad Fittler’s Monday press conference when the NSW coach took a call from team doctor Nathan Gibbs confirming he was ruled out.

Saifiti ran for 244 metres across the first two games of the series, the most by any forward on the field as the Blues claimed the Origin shield with back-to-back wins.

“He’s a huge loss; since Perth a couple of years ago he’s been the head of our footy team,” Fittler said of Saifiti.

“Great to see on the weekend Junior Paulo and Payne Haas were outstanding.

“It’s up to them boys to step up and lead the way for us.” 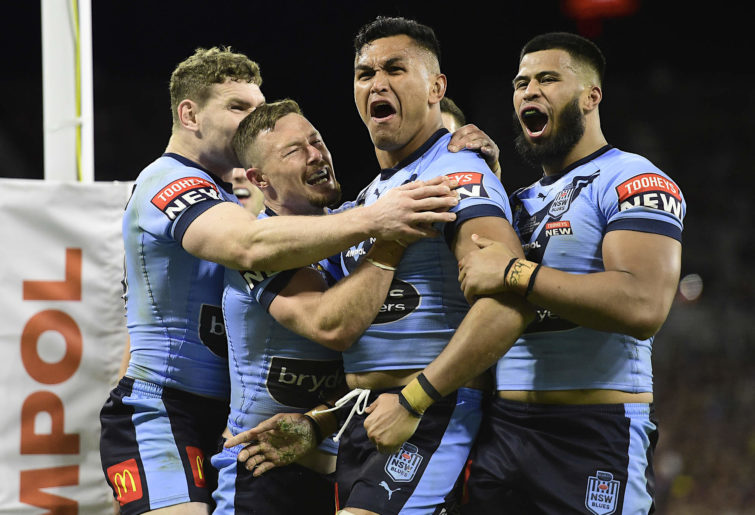 Saifiti is the third player, along with Jarome Luai and Nathan Cleary, to be ruled out of Fittler’s side for Game 3 on July 14 as the Blues attempt an historic whitewash over Queensland.

With Jake Trbojevic still unavailable through injury, Melbourne workhorse Dale Finucane will come into Fittler’s 17 after serving as a reserve squad member for Game 2.

“I always thought while (Finucane) wore the 20 in our last game we’re going to be very hard to beat,” Fittler said.

“When he’s the 20th player chosen in your squad you’re a tough footy team.

“I’m so happy to be able to reward him.”

Fittler is desperate to claim a first NSW series whitewash since 2000 after emphatic victories in the first two games.

However, numerous injuries and the fact the series is already wrapped up make it a difficult test.

“It makes the challenge a little bit hard because it would be quite easy to relax and throw caution to the wind and lose your attention to detail,” Fittler said.

“I feel like this is possibly our greatest challenge, to do it when it’s not needed.”

Being ruled out will come as a huge disappointment for Knights co-captain Saifiti with the Origin game likely to be played at his club home ground in Newcastle.

The NRL is nearing an announcement on the venue, but it is almost certain to be moved from Stadium Australia due to the coronavirus outbreak in Sydney.

The first two matches were held in Queensland but the NRL is hoping to keep the third game in NSW.