Your club's underrated performer: Round 16

The year is taking shape, the race for the eight is heating up and the footy world continuously underestimates the battlers of the footy world who are strutting their stuff.

Adelaide – Lachlan Sholl
After a really lean run for Sholl (two 14 disposal games and was the sub in the last month), he was back with a bang and a much better performance from Adelaide in the first half was superseded by Brisbane taking over but Sholl was good throughout.

While his disposal can improve, no one can argue against 13 contested possessions, five marks, four inside 50s, four score involvements, three rebounds and a couple of clearances in his 28 disposals.

Brisbane – Marcus Adams
Brisbane turned it on in huge fashion in the second half on the Crows with Jarryd Lyons, Mitch Robinson and Zac Bailey leading the way and although Harris Andrews is a star, their second tall defender was unreal on Saturday afternoon.

His day you ask? 18 disposals on 83 per cent efficiency, thirteen contested possessions, five rebounds, eight marks but four of them were contested (!) and even had four tackles! For a key defender, tick, tick, tick!

Carlton – Jack Silvagni
Much maligned but stood up is the line to comes to mind when thinking of Silvagni’s game on Saturday night. Is Jack an enigma, a struggling talent, a list clogger or a wasted talent? Plenty of people will have different answers but this was a very good performance.

Essendon – Will Snelling
Social media gave this man some whacks on Friday night which was befuddling as someone who actually watched the game, Snelling wasn’t bad, he wasn’t even okay, he was good! Essendon did have some passengers on Friday night but he was certainly not one of them.

The 2019 mid-season draft product had 24 on the weekend (half of them contested), seven tackles, 70 per cent efficiency, five clearances, three inside 50s, three score involvements and tried his guts out.

Fremantle – David Mundy
This man should not be able to play this good a quality of football at 35 (36 in two weeks) years old but here he is, in all his glory, with a consistency that most (if not all) players can only dream of.

He’s had 21 disposals (eight contested), 76 per cent efficiency, half a dozen clearances, four marks, four tackles (which at 35 is unreal) and three inside 50s. Shouldn’t be allowed to do that.

Geelong – Jed Bews
Geelong have got the same handful of guys who get all the media attention and then you’ve got unsung heroes (especially down back) who get the job done well, consistently and without much fuss. This man is no exception.

20 disposals at 80 per cent efficiency on a slippery night, eight marks, eight contested possessions, four rebounds, a couple of inside 50s and 344 metres gained was his night and if Geelong do win the flag, the media will make it about the 30+’s but we here at Underrated HQ will not forget the players like Jed Bews.

Gold Coast – Jack Bowes
What a win for the Gold Coast Suns! In just their 22nd win in 125 tries away from home, they kicked poorly at goal to keep it close but they answered every Tiger challenge. Shout out to Sean Lemmens and Wil Powell who nullified Dusty for a lot of Thursday night.

However, the man getting the love here is Bowes, who in Fantasy circles has been criticised but there’s so much more to the game than that. He had 21 touches (20 kicks!), took eight marks, had five contested possessions, five score involvements, three tackles, three rebounds and 328 metres gained.

GWS – Adam Kennedy
The Giants are in the eight and look like staying there with their determination, grit and making Melbourne look real shaky. With all of the ‘talkable’ Giants (Josh Kelly and Toby Greene leading that talk) who get the media spotlight weekly, players like Adam Kennedy go unnoticed but was very good on Saturday.

Kennedy had 18 disposals (13 kicks), nine marks, half a dozen contested possessions, 72per cent efficiency, four rebound 50s, four score involvements, a couple of clearances, inside 50s and tackles in what was a very nice performance. 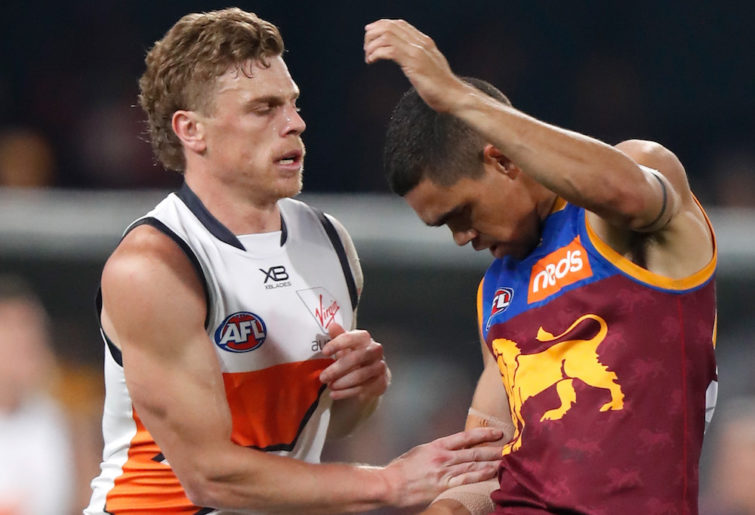 Hawthorn – James Worpel
The Worpedo looked refreshed since being suspended (sounds wrong that sentence) but his last fortnight has been very good and best of all, he’s back to playing angry circa his 2019 Peter Crimmins Medal season.

From 21 disposals and seven clearances to 23 disposals against Port, with a dozen contested possessions, nine (count em) clearances, equal team high eight tackles, three inside 50s, three score involvements and 1.1. Foot skills still need some polish but the grunt is back.

Melbourne – Trent Rivers
There are two types of people who watch the footy. As the CEO of Underrated HQ, I am looking for the humble battlers who get the job done who go under commentator and media personalities’ noses alike and my significantly talented better half who coined Rivers as ‘one of the best looking humans I’ve ever seen’.

However, the CEO saw a man who (Steven May, Christian Salem and Jake Lever got all the kudos and rightly so) was almost dominant with his 22 disposals, 81 per cent efficiency, seven intercepts, six marks, six rebound 50s, four tackles and 455 metres gained. Kid is a ripper.

North Melbourne – Tarryn Thomas
The former top ten pick in the 2018 ‘SuperDraft’ is really starting to announce himself as a genuine gun in this competition.

After a six disposal first half and a worry that he was stalling, he ended the day with 24 disposals (14 contested), 10 score involvements, eight clearances, five inside 50s and went at 83 per cent effficiency. Very good response from the young man.

Port Adelaide – Jarrod Lienert
Another guy who footy fans outside of Port wouldn’t recognise if you caught him with your girl, Lienert was one of many steadying influences in the back half for Port.

17 disposals (16 kicks) was his night at 82per cent efficiency, seven marks, five rebound 50s, three tackles, 312 metres gained, nine pressure acts and four intercept possessions in what was a game not for the highlight reel but this performance was more than handy.

Richmond – Patrick Naish
The Tigers senior players (barring Tom Lynch) flunked, failed, flopped and looked like they didn’t care at times, no energy and with arrogance and disrespect. However, I loved what I saw from young Naish.

St.Kilda – Jimmy Webster
One of the more forgotten men in footy, Webster is getting back to his best and the former No.42 pick from Glenorchy had a good day on Sunday afternoon.

Sydney – Harry Cunningham
Not for the first time this year, Cunningham makes an appearance on this segment but he’s putting together a very fine season in a very good football team.

On Sunday’s genuine belting of West Coast, Cunningham had 20 disposals (14 kicks), went at 90 per cent efficiency, took seven marks, had four rebounds, three inside 50s and three tackles. With quality role players like Cunningham, the Swans’ development will continue to improve rapidly.

West Coast – Jack Darling
It is extremely rare that a team kicks 3.8 and a tall forward gets kudos but there’s not a lot more that Darling could have done.

A smoky for the Eagles’ best and fairest award this season, Darling had 13 contested possessions among his 18 on the day, took seven marks (including a game high four marks), had six score involvements, five inside 50s, a nuts 17 pressure acts and 378 metres gained.

Western Bulldogs – Bailey Williams
As what feels like every week, the Dogs have their elite core who get the job done, mixed with their role players who can dominate without the limelight. In a much closer game against North than the first time they met this year, Williams was unreal.

The 23 year old from Glenelg had 19 touches (17 kicks) at 78 per cent efficiency, a team high nine rebound 50s, six contested possessions, four score involvements and a big goal from 55 out. This is a premiership calibre team and these guys are uber important.