We have a spread of games by geography and what kind of attendant volatility in rulings would that bring, a number of lower ranked sides were stacked up against the big boys, and for the first time we were seeing multiple cross-geography matches taking place with the approach to using quicker ruck ball a key interest.

And of course, for the first time, the big dogs of world rugby – South Africa, New Zealand and the British and Irish Lions – strolled out onto the field on the same weekend.

The following are a few things worth a mention.

What a delight it is to watch the Japanese national side play rugby union. An emphasis on ball movement, a focus on quick ruck-ball, which was in place before the directives changed, and the individual ball-skills with transfer by either hand or foot encouraged across the side.

Disappointing that Kazuki Himeno went down in the warm-up as his grunt around the ruck would have made things even more difficult for what was a quality Irish loose forward trio. These guys show what coaching to your strengths can do for the sum of the parts. Surely that Jamie Joseph-Tony Brown combo has a part to play at All Black level some time in the future?

Find a rock-solid tighthead and a dominant lineout forward and Japan will be a real threat to many – perhaps a scour of the Sumo stables may be in order?

Speaking of the ex-Highlanders duo, it is worth noting that six of the southern men represented the Maori All Blacks forwards versus Samoa on the weekend, a game tighter than the final score indicates – a nice way to celebrate the sixth anniversary of our Super Rugby win on July 4 2015 in Wellington.

One would think this Samoa side will have too much about them for Tonga even when they add some quality out of quarantine.

While the princesses were racking up some impressive stats out wide, how good to see the performances of the halfback/loose forward combinations close to the ruck taking advantage of the faster game. Particular mentions go to Josh van der Flier, Hamish Watson, Luke Jacobson and Brad Weber, while Cobus Reinach threw a serious spanner into the Springbok-selection works with a performance perfect for how the new game is being played. His performance makes the selection of Conor Murray as the Lions’ captain even more intriguing. 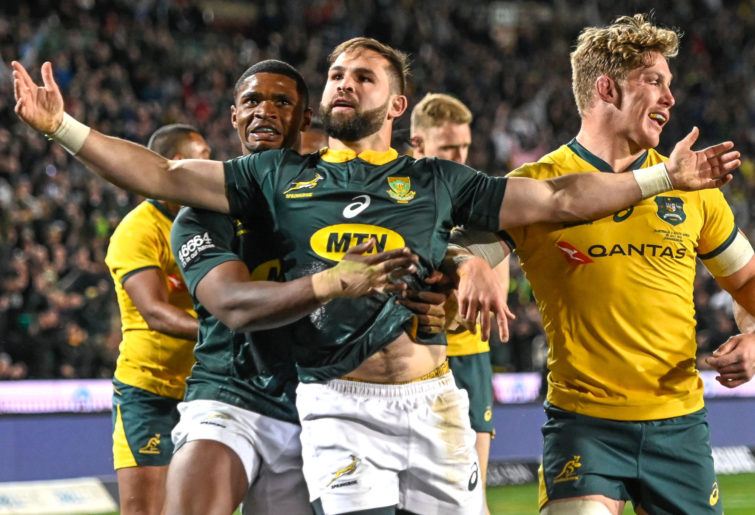 A real bonus for our game was an article by Wayne Barnes on Friday acknowledging the recent, clear restatement of focus by World Rugby head of officials Joel Jutge on three things — safety, speed and space. Jutge noted how the three referees for the Lions-South Africa series, all from differing nations, are discussing being consistent with these themes. We only want consistency guys so let’s deliver. I must remember to send Mr Jutge a Christmas card.

While there were not too many positives to be taken from the heavily skewed New Zealand vs Tonga match, a Twitter exchange did get my attention. Andy Goode, half of the dumb and dumber duo on a UK rugby podcast, took the now standard cheap shot about the All Blacks stealing players from the islands, but ignorantly included the Auckland born Charles Piutau in his sweeping generalisation. But that wasn’t the key part.

He was firmly put in his place by Simon Raiwalui, Fiji’s general manager of high performance:

“[W]ithout NZ pathway systems, what do a lot of other national programs look like… They provide a lot more than they take? When pointing fingers we may also have a look in the mirror, last time I checked, Tuilagi, Cokanasiga, Rokoduguni & Hughes were not from the Lakes District!”

The Roar’s very own Jacko wins the office sweep on when South Africa will prove the ‘500 minutes’ story was the greatest work of fiction since the French put vows of fidelity into the marriage service (thanks for that Edmund Blackadder), as it’s overturned in their very first Test match.

A nod to football people for producing a tournament of upsets and excitement so far at the Euros, with the big winners being The Lightning Seeds, David Baddiel and Frank Skinner, who wrote the ‘Football’s Coming Home’ anthem – they must be getting rich all over again.

Next stop, Wallabies vs France for a mid-week interlude.