Round 16 Pies review: Has a caretaker coach ever been sacked?

If this trend continues, I dare say we might see the first caretaker coach to be sacked.

Don’t let the scoreline fool you, punters, it was a deadset putrid performance. We were hopeful about getting a breath of fresh air out of Robert Harvey – god, we were hopeful.

What we have received has been Nathan Buckley .10.

It has been the exact same method that has seen us slump so heavily.

It’s almost stunning the lack of changes the man has made.

The biggest change Harvs has made is the return of the Big Liability, Mason Cox.

Mason can play out of the goal square and take one-grab marks but he hasn’t been able to do that with any meaning for three years.

If I hear the commentators applaud him for bringing the ball to ground one more time, I’m going to fly kick the TV off the wall. That is the absolute bare minimum of a key forward. It is like praising a human for being able to breathe. 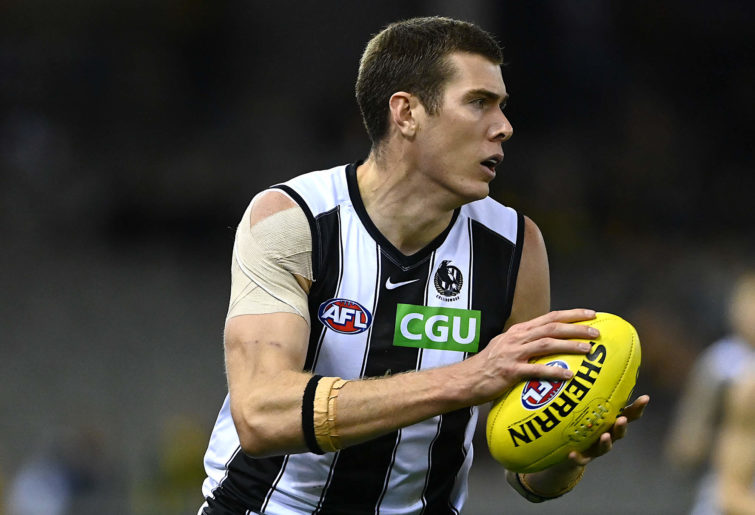 If we praised any first pick AFL key forward for not marking the ball and bringing it to ground, they would spit in your face.

He has two skills: contested marking and goal kicking inside 30 metres. Why are we praising him for failing one?

His lack of ability at ground level is astounding. If he doesn’t mark the ball first touch it hits the deck and we are one player down instantly.

I could go on but I may already be teetering on the edge of an email regarding ranting from the editors of The Roar.

On the weekend, St Kilda made us look incredibly slow around the ground. Brad Hill’s foot speed absolutely destroyed us.

We had not a single player who could get close to him. Credit where credit is due – they had some good performers. Jack Steele was incredible, as was their back six, with Wilkie and Webster playing above their roles.

To be fair, we are missing Darcy Moore and Jeremy Howe from our back six which is a massive blow, but wouldn’t you think that gives you the perfect excuse as a caretaker coach to go, ‘you know what, I have nothing to lose by opening up our game here’?.

It’s just so disappointing. Us Pies fans aren’t even going to live off a little bit of caretaker false hope for the rest of the year.

In the middle of the ground for the Pies, Jordan de Goey has looked good, collecting plenty of touches and providing grunt and explosion which we have lacked since the departure of Adam Trealor.

Since returning from injury, Jordy has been able to play a significant time in the middle.

Taylor Adams is the butcher – for two weeks running the bloke has gone at around 50 per cent kicking efficiency. That is putrid.

I understand he does a lot of contested work but that is not good enough. Scott Pendlebury at his ripe age is still looking like our best, easily. Scary.

The kids – well, it’s rough losing young Josh Daicos, what a year the boy has had. I’m really looking forward to watching him for the rest of his career.

Trent Bianco continues to show good signs for the future, as does Isaac Quaynor, who this year has become a man in front of our eyes – the bloke is strong.

Caleb Poulter is still tracking well, although dropping slightly in output, which is to be expected for a kid.

This weekend, we take on a seriously under performing Tigers outfit. Now, I’m not hopeful of a win but I am still hopeful we can change the way we play.

If we serve up the same old same old, don’t be surprised if Nathan Buckley takes off his Robert Harvey mask in the presser. Harvs can not be this silly to not change the game at all.