That's the spirit: Patty's mates celebrate at 2am as he shares flag honour with Cate

For just the second time in Australia’s Olympic Games history two flag-bearers will stand side by side at the opening ceremony, in Tokyo this month.

The men’s and women’s basketball teams are in the United States for a pre-Olympic tournament, and were up, dressed in their team uniforms for the announcement, at 2am local time.

“It’s 2am here so I really appreciate everyone’s support, and it’s a massive honour and privilege,” said Mills, who becomes our first Indigenous flag bearer. “I’m really thankful for all the support up to this moment.”

Campbell added: “This is an honour and privilege I do not take lightly,” said Campbell. “I’m so, so humbled to be selected.”

The last time Australia had two flag-bearers at an opening ceremony was the controversial boycott-hit 1980 Moscow Olympics, where swimmer Max Metzker and track sprinter Denise Boyd shared the honour.

This time International Olympic Committee (IOC) has asked every nation to supply a male and female flag-bearer as part of a push for gender equality.

While the opening ceremony is usually a huge occasion for athletes without urgent next-day competition commitments, this year’s promises to be a smaller, more intimate affair.

“It will be a real point of difference compared to what normally happens,” Australia’s chef de mission Ian Chesterman said this week.

“I don’t think there will be the number of athletes from any nation who might have marched in past Games… I don’t think we’ll see a large contingent of Australians marching.”

Here Roar experts Mary Konstantopoulos and I give our verdicts on why Mills and Campbell were the perfect choices to have the honour in Tokyo.

Cate Campbell is one of Australia’s most recognisable swimmers, and for good reason. With her qualification for Tokyo, Campbell will be competing in her fourth Olympic Games – the third alongside sister Bronte.

There are few who have achieved what Campbell has on the world stage. By the end of this year she will have competed at four Olympics, two Commonwealth Games, four world championships and three pan-Pacific championships. Incredibly she holds 21 international gold medals and two world records.

But the flag-bearer is about so much more than achievement just in their chosen sport.

When reflecting on the Rio 2016 Games, a moment that comes to mind is Campbell’s failure to win an individual gold medal. It shocked fans, spectators and Campbell herself.

So much of what we admire in our athletes is vulnerability, courage and persistence, and at 29 Campbell is still fighting to improve with hopes of ending up on the winner’s podium at Tokyo.

Campbell has also been a strong advocate for social causes. In particular I remember her openness in sharing her struggles with body image. For the next generation of young women, healthy body image is an important topic of conversation and one Campbell herself is passionate about.

She is an outstanding role model both in and out of the pool and would represent this country proudly as a flag-bearer. 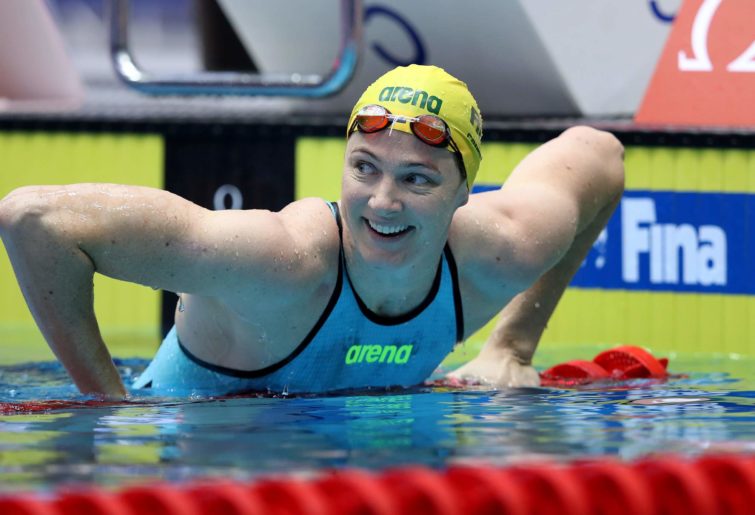 On the women’s side there were many options open to the AOC.

These Olympics are going to be incredibly special for the likes of Stacey Porter, one of Australia’s most talented softballers, who will be competing at her third Games. Porter would likely have attended many more, except that softball has not been part of the Olympic program for the last 13 years. It has been reinstated for Tokyo given how popular it is in Japan.

She and teammate Justine Smethurst are the only members of the current squad to have represented Australia at an Olympic Games.

Porter is a proud Indigenous woman and is the first to represent her country at softball at an Olympic Games. Her advocacy in this space has led her to travel across the country working with young people to encourage them to lead healthy lifestyles.

With over 440 games, Porter is the world’s most capped softballer, and it would be extremely fitting for her to lead the Australian team out after waiting so long for her sport to be returned to the Olympics.

Other women to watch include Melissa Wu, heading to her fourth Olympics, whose 61 medals since her international debut make her one of the most successful divers in Australian history.

Jenna O’Hea will captain the Australian Opals after missing out on Rio, and her leadership has identified her as a key member of the squad.

Then there are two tennis players who will have plenty of support during the Games. Sam Stosur is heading to an incredible fifth Olympics, while Ash Barty is the world’s top player and has achieved so much in her chosen sport. Adored by Australians, I would love to see Barty’s smiling face leading out the Aussie team at Tokyo – perhaps after winning a Wimbledon crown!

“Green and gold mindset. Period.” Patty Mills’ recent tweet, published on the day it was revealed Australian baller Ben Simmons was rejecting the chance to play in Rio, sums him up. A man of considerable action and clear thought, Mills is the perfect choice as a symbolic co-captain of our Olympic team.

Before the last Games, when the Boomers briefly threatened to break their medal drought under his leadership, Mills took the side for a bonding visit to Uluru.

The team refurbished a court for the local Mutitjulu community with new hoops and lines and met the local kids.

“It was for everyone individually and as a team to find that deeper meaning of… why do we put on the green and gold and why are we so passionate and proud to play for Australia?” said Mills.

Mills backs his pride with community action, spending hundreds of thousands since the Rio Games helping his countrymen. There is the Indigenous Community Basketball League, for which he flies in kids from remote communities and pays for their accommodation, venues, uniforms – the works.

And then there’s his Indigenous Basketball Australia (IBA) charity, the work for the We Got You campaign to eliminate racism and exclusion in Australian sport and his efforts to raise $750,000 from fellow Australian NBA players in wake of the country’s bushfires.

Mills will be at his fourth Olympics in Tokyo, having celebrated his 20th birthday at the athletes village in Beijing 2008, which he recently reflected on in another perfect example of why he should lead our team out in Tokyo.

“Olympic unity. A big part of the Olympic Games for me is its power to bring people together,” he wrote.

“For my first Olympics, I walked into the village as a wide-eyed 19-year-old just happy to be there.

“As my birthday approached towards the end of the games, the legendary Laurie Lawrence organised for the Crown Prince and Princess of Denmark and all Aussie athletes in the village to come together and sing me happy birthday. A moment of togetherness and a memory I will never forget.

“Unity is greater than sport.”

Mills becomes the third basketball flag-bearer in six Olympics — Lauren Jackson in 2012 and Andrew Gaze in 2000 were the others. While some thought that would count against him, this is Patty’s time.