Guts and grit: How Wallabies won a game they've lost so many times before

It probably won’t be remembered quite as well as Justin Harrison’s famous lineout steal on debut against the British and Irish Lions in 2001, but Darcy Swain’s ability to contest a French lineout just seconds away from winning the first Test will certainly go down in second-row folklore.

In truth the game was gone. Time was already up and the siren had already sounded. The French were one last play away from securing their first win on Australian soil in the professional era. They just had to win their own throw, kick the ball out and pop the champers.

French backrower Dylan Cretin got up quickly and won the ball, but Swain’s aerial presence just in front put enough pressure on Cretin that his delivery to the floor was compromised.

The ball was loose. Replacement scrumhalf Teddy Iribaren had to run backwards toward his tryline to get a hand on the ball and was instantly pursued by Taniela Tupou – 140 kilograms versus 85 ringing wet. I don’t mind admitting that for a brief moment I thought the fraternity was going to lose a member.

Iribaren got the ball away just as Tupou got a hand on him, but the ball went to fullback Melvyn Jaminet, who as Tupou got hold of him too hurriedly threw the ball to right winger Damian Penaud. But Penaud was going in the opposite direction the ball, and it became loose again.

Tate McDermott didn’t have the best first five or ten minutes on entry to the match, but here he was, Johnny on the spot, in the right place at the right time as the Gilbert bounced up into his hands, with nothing between him and the north-west corner of Suncorp Stadium. 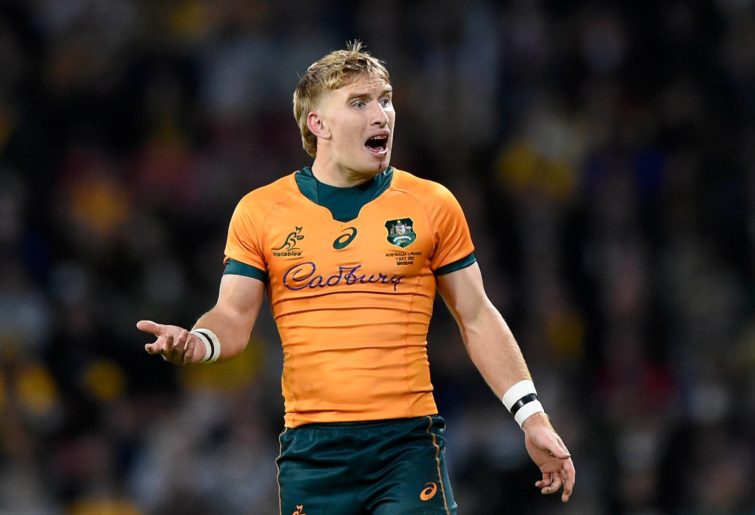 Only four seconds have passed since the lineout throw, and Wallabies fans’ breath was being collectively and nationally and probably even internationally held.

McDermott was brought to ground ten metres short of the French line, inside the tram tracks as the cavalry arrived.

And the cavalry did arrive. First Angus Bell, then Lachie Lonergan, who might’ve arrived somewhat adjacent to the gate. Rob Valetini, Swain and Tupou aren’t far behind, and Tupou quickly picks and goes for another metre.

Think about that par you’ve just read. Think about how many times the Wallabies missed their attacking cleanout during the game. But they were there in numbers, and the clock reads 80:25.

There’s patience. There’s order. There are pods forming with carriers and drivers and cleaner-outerers. They’re pointing to where they need to go, towards the posts another 20 metres infield.

More picking, more driving, centring the ball to where they need it. Seven phases since the Wallabies somehow got their hands on the ball in a game that was seconds away from being lost.

Another seven phases and they’re in front of the posts. “Advantage, offside again,” Pickerill screams as his arm goes back up.

The clock reads 82:04. I’m pausing and playing and writing this as I go, and I can feel the nerves building again.

McDermott has a crack, goes close. Marika Koroibete does the same thing under the black dot for the same result. That’s 16 phases gone.

Two more phases right of the posts, advantage still in the air, and McDermott’s pass to Noah Lolesio in the pocket isn’t great. The drop goal attempt – his second for the night – is charged down by three French defenders.

Pickerill blows the whistle. It’s a knock-on. Runs to the spot, five metres out and right in front. The Wallabies bench erupts. There’s just under 18,000 in and Suncorp sounds like Queensland have won State of Origin.

The 84th minute begins. Hooper points to the posts for the third time in the match. Lolesio kicks the penalty.

The Wallabies have won a Test match they should’ve lost four minutes ago. Wallabies fans – now much greyer and much older – are left to wonder where this guts and grit and will and desperation have come from.

Because it was a far from polished performance. It was a performance that looked like 23 blokes had been part of a bigger squad training their arses off for the last month and were just desperate to play a game.

They still coughed up far too much ball. They’d missed eight first-half tackles and conceded six turnovers to trail 15-7 at the break despite dominating possession and territory from pretty much the 15-minute mark. They ended the match missing every fifth tackle attempted.

But they won. They bloody won.

In four nerve-racking minutes they showed a quality of character that’s gone missing all too many times in Wallabies teams for as far back as you want to recall, and they found a way to get this job done.

It’s got to work wonders for their confidence and self-belief going into Tuesday’s second Test in Melbourne.

And that is now their biggest challenge. They will be only as good as their next game.

Long-term Roarers will have seen me repeat that adage of the Wallabies a lot over the last decade, and it remains as true as ever.

It wasn’t a perfect performance, but there was so much to like. There is still plenty to work on, but it’s a whole lot easier to hook into that work after a win like that.

And the best part is this compressed series brings a funny silver lining: the next match is now only six days away.