Coach’s Corner Issue 20: Why Jake got the nod over Tate

A big thank you to everyone who participated in the call-out.

Can you explain to disgruntled Queenslanders why Jake Gordon was far and away the choice candidate ahead of Tate McDermott for the first Test versus France?
– LSD.

Gordon is big, strong, and basically good player. He has the better pass at the moment, kicks better too… But will become disgruntled if Tate does not get a fair bit of time as a finisher, does not start one game of the three.
– Mzilikazi

Coach can you analyse the stats for all the Wallabies squad scrum-halves and tell us who came out on top?
– GoldenEye

Can you please do a comparative analysis of scrum half passing speeds in Super Rugby AU (from Tate McDermott, Jake Gordon, Nic White, Ryan Lonergan and Joe Powell)?
– Armchair Halfback

Dave Rennie could not have answered this question more bluntly in the press conference after the Wallabies team for the first Test was announced.

“What Jake has over Tate is core skills: quality of kicking game, the quality of his distribution.

“Jake’s a very good running half-back as well, he was outstanding against the Kiwi sides and did a great job leading the Waratahs.

“Tate, we know, is electric off the bench and that is going to be important against tiring forwards”.

Although a deep-dive into the relative passing lengths and speeds of the five half-backs under discussion is beyond the remit of this column, it is certainly possible to put together a more basic table which gives some strong indicators of the selection process. It includes the stats from both Super Rugby AU and Trans-Tasman.

Pass completion stats are a simple reflection of the ability to get the ball to the target. They do not reflect the speed, length of quality of delivery. Error percentage on kicks is a simple representation of kicks which were either charged down, or went out on the full from outside the 22.

There is a clear link between the stats of the top two-rated scrum-halves (Nic White and Jake Gordon) in this table. Both are used to being the main kicker for their Super Rugby teams, whereas Tate McDermott is not, and White has the lowest error count of all.

White and Gordon are also the only two number 9’s with a tackle completion percentile in the 80s. This may reflect their communication skills and organisational ability more than their tackling technique. They tend to be ‘in the right place at the right time’ to make tackles.

Tate McDermott is way ahead of everyone else in his breaking ability around the base, and ahead of everyone except White in terms of creating assists for the players around him. Those are classic stats for ‘the finisher’ not ‘the starter’.

We can add a little flesh to the bones by referencing some of Jake Gordon’s recent performances from Super Rugby Trans-Tasman.

Last week, we looked at Tate’s passing technique from left-to-right. Here are two similar examples of both 9’s passing the ball off their left hand to a 10 preparing to kick the ball.

There is less of a lift, and fewer steps towards the receiver in the Gordon example (from the game against the Crusaders), and this grants the kicker much more time and space to find the target space.

Now let’s look at how the extra speed of the delivery, while preserving a flat line of flight, is able to give attacks access to width.

The absence of unnecessary moving parts in the delivery from 9 allows the attacker to move on to the defender’s outside shoulder and force him to move sideways, not forwards.

Jake Gordon stays lower to the ground for longer servicing Angus Bell, than Tate McDermott does for Taniela Tupou. The benefits look fractional, but they make all of the difference.

Now ask yourself – could Tate have managed this sequence of short-range attacks from left-to-right as slickly as Jake?

A quick pass from the base gets Lachie Swinton on the front foot, then a no-look inside flick and another skilful draw on the first defender gives Swinton a bit of running room for a second time in the sequence. The Waratahs scored a try shortly afterwards.

There is just enough time to extend the discussion on the merits of Jake Gordon and Tate McDermott in the aftermath of the first Test in Brisbane. On the evidence of the game at the Suncorp, neither is ready to unseat Nic White just yet.

Early in the game, Jake Gordon took a hop and a skip out towards the receiver just when it mattered the most.

Hunter Paisami wants to the the ball on a short angle, so the timing of the play is crucial to its success. Because Gordon takes those extra couple of steps away from the base of the ruck, Paisami is already level with the passer at the moment of delivery, and the ball cannot go anywhere else but forward in its movement. 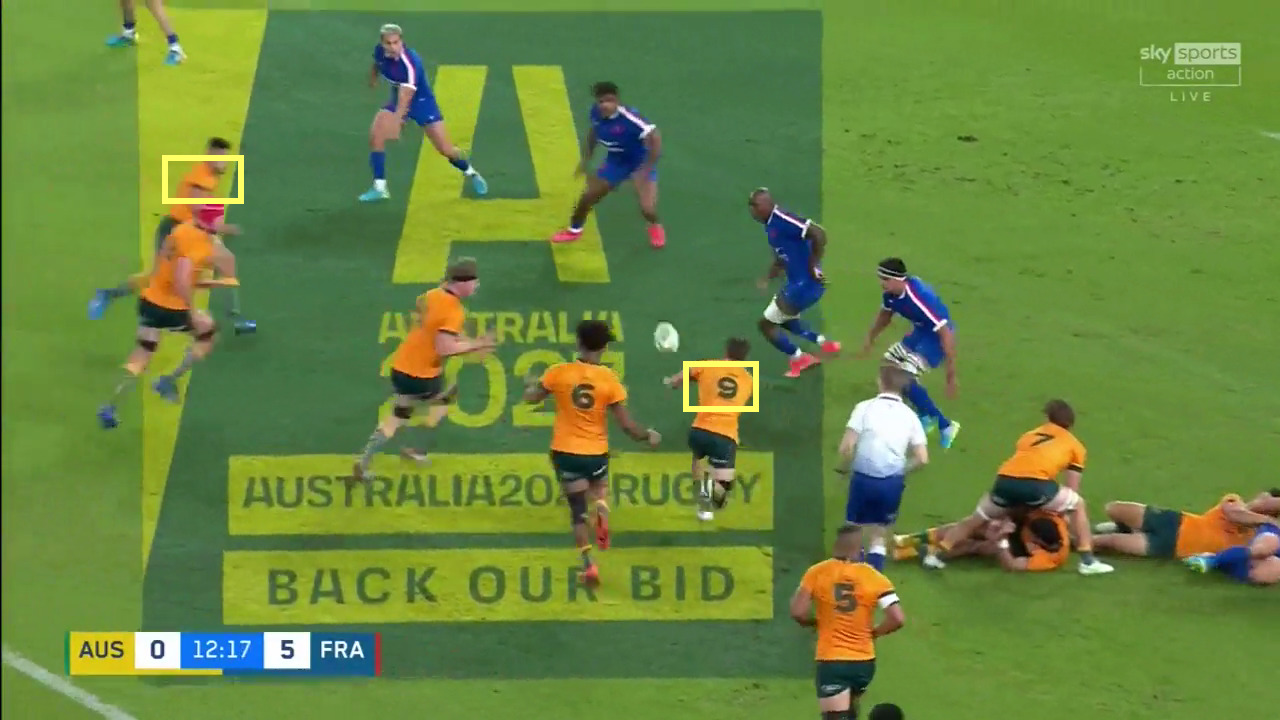 Jake Gordon was also responsible for the defensive miss which led to France’s second try from a scrum.

He guesses right initially, circling around to the open-side of the scrum to become the first defender, but then spoils the effect by jumping straight on to his opposite number Baptiste Couilloud, instead of checking off the ball to the blind-side wing Gabin Villiere first.

Matters did not really improve when Tate McDermott came on to the field on the hour mark. His last-gasp pass to Noah Lolesio would have made the difference between winning and losing for the Wallabies, had not a penalty already been awarded.

The delivery is high and right, and it costs Lolesio time to get it under control – enough time for the French defence to close on the young Brumbies play-maker and block down the drop goal attempt.

Neither Gordon nor McDermott kicked especially well in exit situations.

The ball scarcely makes it beyond the Australian 22 in both instances. The only man to come out firmly in credit from the fall-out of the 1st Test among the Wallaby halfbacks was Nic White, and he was not playing. Dave Rennie has a fascinating, if problematic choice to make at number 9 for the second Test.

Could you please look into the first try Damian McKenzie scored for the All Blacks on Saturday a bit deeper? He worked himself from one side of the field to score in the other corner in a couple of phases. Showed great work off the ball and getting into positions where he would be effective.
– Carlin

This picks up the main theme from Wednesday’s article this week – how work off the ball is a real point of difference for modern players, especially in the back three.

McKenzie starts by resourcing a New Zealand ruck on the far right of the field. As the ball bounces back infield, he makes a crucial decision (at 0:59 on the game clock) to provide open-side support rather than stay on as a short-side first receiver.

His decision receives the ultimate reward when he dots down in the left-hand corner after providing the break-pass for George Bridge on the previous phase. In the space of just 20 seconds, ‘D-Mac’ has travelled the full width of the pitch and made four involvements, without any of which the try would not have been scored.

The importance of work rate off the ball from players in the back three was once again reaffirmed by the performance of Marika Koroibete in the first Test at the Suncorp.

In one memorable sequence, he managed to make himself the ball-carrier on three successive phases, well infield and away from his natural wing!

Not satisfied with the initial return, Marika then releases and picks up the ball with nobody in front of him on two further occasions.

Thanks once more to all who contributed to, or developed a question in the call-out!