The two romantic reasons I'm an Italian in disguise

The first footballer I ever loved never won a major title and had his reputation tarnished by a match-fixing scandal, but that won’t stop me cheering for his national team on Monday.

I played my first game of football in Sydney’s suburban Hills District when I was four. It wasn’t a proper competition because at that age most of us were struggling to figure out who our teammates were, let alone what to do with the ball.

But after a couple of years toe-poking anything that came near us and bunching up on one side of the field, eventually we were unleashed on full-field football in under 7s.

There must have been a lot of nil-all draws that first season. I was a sweeper, and the first time I ever set foot on a proper field, I remember feeling like the opposition goalkeeper was about a kilometre away.

I played for that club for a few years before a group of us decamped to a rival to try and win a championship, but what I most remember about those early days was the gradual understanding that the sport I played on Saturday mornings was the same one I saw on TV.

My earliest memory of a major tournament was of Toto Schillaci scoring six goals for Italy at the 1990 World Cup in his homeland. I was eight and remember seeing highlights on the news.

But Schillaci wasn’t my first football love and it wasn’t his goal-scoring that impressed me. What I most remember about Italia ’90 were those distinctive rectangular nets.

By the time the Socceroos embarked on their heroic but ultimately doomed attempt to qualify for USA ’94, I was hooked on the world game.

I was also old enough to realise that if my own nation never made it to big tournaments, I’d be short on options when it came to supporting a team.

Back in those days, my favourite thing to do was watch World Soccer on a Saturday afternoon and Italian Soccer on Sunday mornings. I watched those two shows religiously.

And the player I couldn’t get enough of was none other than Lazio’s electrifying striker, Giuseppe Signori.

He’s perhaps one of the more forgotten names of the nineties, but Signori remains equal-ninth on the all-time Serie A goal scoring charts after bagging 188 goals in just 344 games.

But it wasn’t just that he scored goals for fun that made him such a mesmerising player. It was the way he played; all left-foot at breakneck speed, forever out-running defenders.

I’d never seen anyone play the way Signori did and when USA ’94 rolled around, I asked my parents to buy me an Italy jersey and got his name and number on the back.

I became a bona fide Azzurri fan despite never once setting foot in Italy! 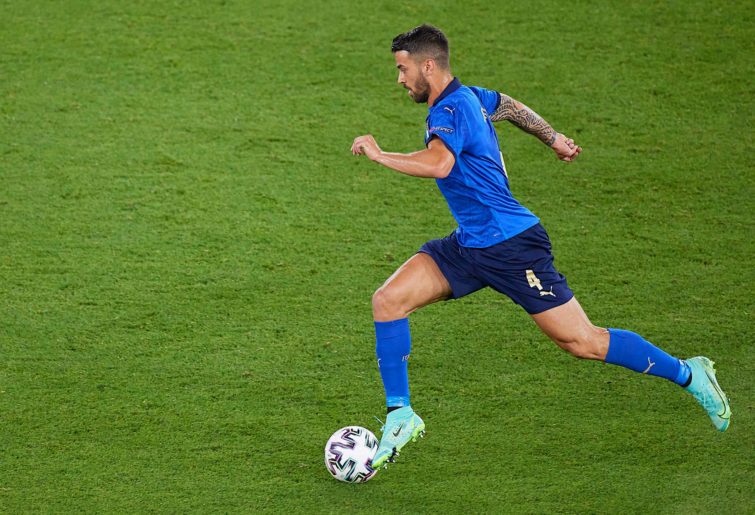 Signori never settled in Genoa but bagged 66 more goals in 142 top-flight appearances for Bologna at the back end of his career.

Strangely enough, by the time Euro 2000 rolled around I never made much of an effort to attend any games despite the fact I was living in Germany at the time. I felt like I’d outgrown watching national teams I had no real connection to.

But come Monday morning, I’ll be one of hundreds watching the game on the big screen at a Brisbane café surrounded by Italian fans.

One of them will be my wife, Ashton. Her grandfather was from Sicily and Italy’s run to the final has reawakened her national pride.

I hope the Azzurri win for her. And for Beppe Signori.

It took almost ten years to clear his name after being implicated in that 2011 match-fixing scandal, with Signori always maintaining his innocence.

But to me, he’ll always be the player who made me fall in love with Italian football.