Everyone relax. Take a breath. Now, let’s all celebrate a tick in the win column for the Wallabies this year.

Being at the game, the crowd rode the highs and lows of the match, and the fact the last-minute change still drew a reasonable crowd was great.

That said, I want to discuss something that I am seeing across the Wallabies news, opinion and comments sections. Why are some so set on trashing our coach and players?

Dave Rennie is an elite coach. He has a winning record coaching at club, provincial, Super Rugby and international level. He has also successfully turned clubs around – see the Chiefs pre-Rennie – so why are we so quick to question his selections?

Take off our state hats for a second and look at the big picture. For an entire World Cup cycle we didn’t see any development in flyhalf or scrumhalf among others. Bernard Foley, Will Genia and Nick Phipps were relied upon heavily in games during this period. Joe Powell was given about five minutes per game during the June series against Ireland and was hardly seen again. I can’t remember Foley missing a game or being subbed.

By the time the World Cup rolled around, if players were out of form or on the downward side of their playing careers, we didn’t have anyone following close behind. 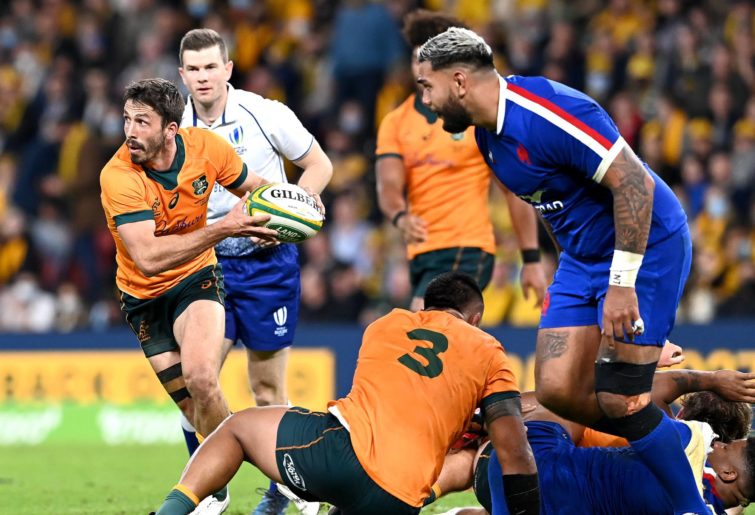 What I’m trying to tell you is that the selection of Jake Gordon in particular was a wise decision to build depth through the squad, the idea being in the event of injuries, the next cab off the rank can fill the void without missing a step.

Before the game I believed Gordon has better core skills, and I still believe it now. I can excuse his mistakes given his return from injury and because he has few caps at international level and thus doesn’t have the composure he should. But that is all the more reason he needs more time.

If he can embed himself with the team and build the combinations of his competitor in Tate McDermott, we would have a situation whereby in the event of injury or substitution our next option won’t miss a step.

New Zealand are incredible leaders of this even down to the Super Rugby level, where, prior to his injury, Highlanders No. 9 Folau Fakatava – one of their promising heir apparent players – was getting more minutes than Aaron Smith to get more time in the saddle and also save Aaron mileage before the World Cup.

This means when Aaron is subbed or injured the drop in tempo and combinations is not too badly impacted. I believe this is a similar method Rennie is going for.

With this said, I also think part of Rennie’s selections was the skill differences suiting different roles – passing and kicking versus running style – but also because the combos McDermott has with his Reds compatriots. Rennie knew what he was getting. The key was to get that pay from other players.

We all need to remember that this series is essentially a June international window situation where we play a second-tier nation or otherwise a tired northern hemisphere team that have come off the back of a long Six Nations campaign and are due for a break. This is the period where we need to get the caps under the belt of some juniors and people who will be in the mix for the World Cup. It is a fine balance between winning now and also building for the future.

I get people are mad about particularly Gordon being picked, and all who disliked it must feel vindicated by his performance to a degree. But understand that I doubt it is a case of favouritism; it is more that he knows what McDermott brings, and those basic skills can be worked on, but the combinations are also important, so this can’t be neglected either.

I expect at least the halves to stay the same, but come Bledisloe time, when we are past the experiment and debutant phase we are in now, I expect you’ll see more veterans and the likes of McDermott get more of a go against the All Blacks.