After too many years and too many tears, this one’s personal

During England’s semi-final win over Denmark I got a text that I never expected.

It was from my mum, Pat, saying: “Oh my god, you won’t believe it, I’m sitting here watching my first game since your dad passed away”.

If COVID wasn’t around I would have bought a ticket and I’d be over in England now celebrating with family and friends, and watching us play Italy in the final with my mum.

Growing up, I used to watch all my football with my dad Joe, and, bless him, he passed away five years ago.

Mum’s text choked me up. I said: “He’s watching with us, don’t worry mum”. But it would be lovely to go back and watch the final with her.

I’m 42 and I never saw England beat Germany at a finals before this tournament, so that was a huge moment for me. 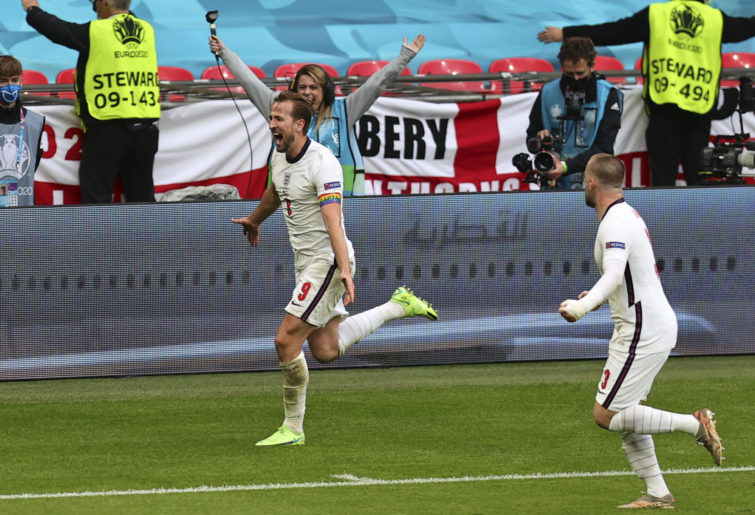 I watched all those big games, those lost semi-finals, with my dad. I’ve got clear memories of the matches, and of lots of tears.

I’m an only child and their life was basically taking me everywhere for football from a young age. I owe everything to them.

It was journeys left right and centre, whether it was up to Scotland to play for Berwick Rangers schoolboys or to Sunderland or the Newcastle Academy. They were those parents who always took the other kids in the car as well.

It was an unbelievable moment when I became a professional footballer, and they watched every single game I played.

Dad was a huge England fan and a Newcastle United fan as a kid. When I signed for Sunderland, he had to swallow his pride and sacrifice going to some Newcastle matches to come to mine. That was huge for him.

My mum wasn’t a big football fan, but we brainwashed her into watching games. It just really hit me the other day what making the final means to England, and to my family.

There is so much emotion in this tournament. Partly it’s because of the return of crowds to the games, and the atmosphere and level of intensity that has delivered.

But also, if you look at Italy and England, they were two of the countries hardest hit at the start of the pandemic, with many deaths in both nations. The spread in northern Italy was devastating and the number of deaths was scary, and deeply affected that country.

The Euros and final between England and Italy on Monday morning at 5am AEST is available free to watch live on Optus Sport. 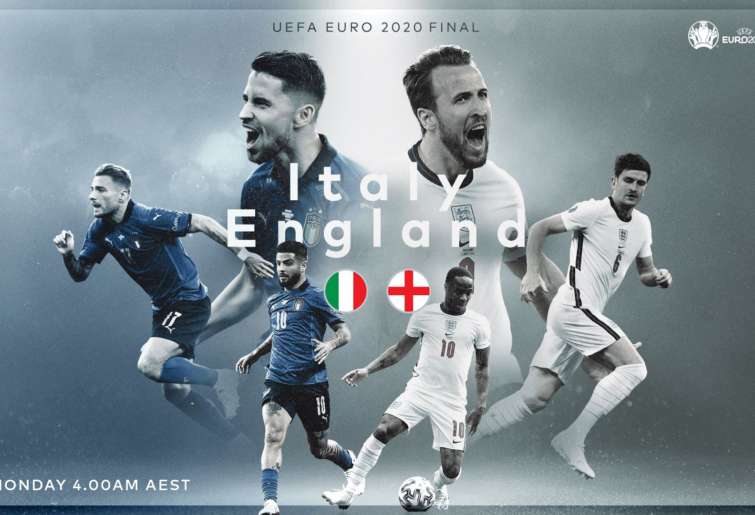 Southgate getting stronger and better
If England wins, there should be at least two knighthoods on offer. One for Gareth Southgate, and one for the journalist who broke the story that saw Sam Allardyce leave the England job after just one game in charge. If Allardyce was England manager right now this wouldn’t be happening.

It feels like the stars have aligned for Southgate, who oversaw the England youth set-up, and the team. He wasn’t even on the radar for this job but he went into the Football Association and said: ‘You need to sort this out because we have an unbelievable group of young players who are coming through and I need to speak to the new manager about them’.

He went in that room and sold himself and got the job. Thankfully, the FA used their initiative.

When he got the job I thought, ‘Oh, that’s interesting’. I was delighted that he’s a Three Lions man, an ex-player, and I’d heard good things about him as a manager because of his personality and the way he builds relationships.

That might have cost him during his time at Middlesbrough when they needed a rocket up the arse and he didn’t give it to them.

But he’s learnt so much through making the World Cup semi-finals in 2018 and he seems to be getting stronger and better with everything he does. He’s in this for the long stay.

The players have been inspired by his leadership and it’s the first England squad I have seen that have all bought into the way of the manager and tournament football. 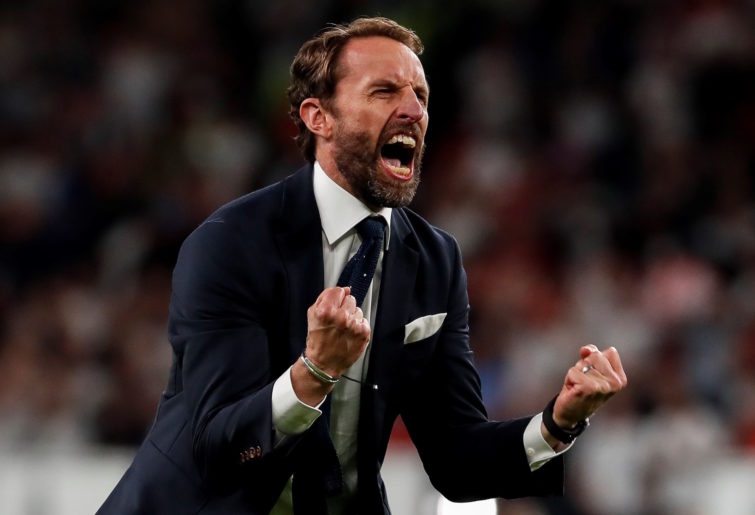 That’s down to his man management and tactical flexibility.

When Jack Grealish came on against Denmark and then got substituted off, I thought, ‘How do you sell that to your player, you could lose him for the rest of the tournament’. But he accepted it was a one-off and done for the team.

Southgate and his staff had explained the potential for such a move before the match, so it didn’t come as a shock. They have been planning for 18 months and you can see the benefits of the hard work.

When England changed from a 4-3-3 to play against Germany as a 3-4-3 with wing backs, I thought that was brave, to change the dynamic from other matches to go like for like and show Germany that respect. But it worked and everyone bought into it.

Saka’s emergence is a surprise
England play a very similar style to Italy, their dynamics are the same, and I’m expecting a tight game.

England will go with the same team that played against Denmark and if not I see maybe one change, with Mason Mount potentially making way for Grealish depending on fatigue levels.

That means going with Kyle Walker, John Stones, Harry Maguire and Luke Shaw in the back line. Declan Rice and Kalvin Phillips, who’s been the mainstay in the defensive unit, will remain.

It will be Mount or Grealish and then a front three of Raheem Sterling, Harry Kane and Bukayo Saka, with Saka providing a little bit of defensive security to Walker when they need it.

When they counterattack, Saka will be the one who will try to exploit Emerson at left back as he bombs forward. 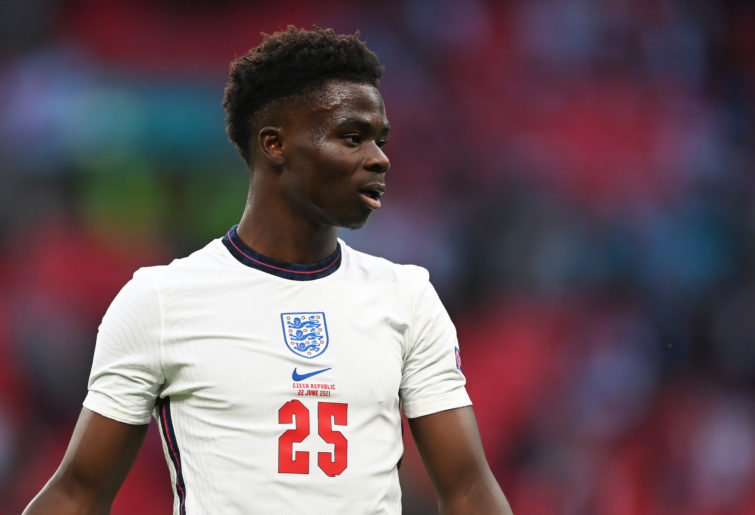 Saka’s emergence has been a big surprise. I had Phil Foden down to be one of the biggest young stars of the tournament but instead it’s the Arsenal player who has commanded the stage.

What he did last season at Arsenal was absolutely incredible. They were having a very turbulent season. He got an opportunity that probably came quicker than the club would have liked, but for him it’s been magnificent.

There was always talk that he was capable because of what he was doing with Arsenal in the youth ranks and what he’d been doing with England at lower levels.

Spending time at wing back for Arsenal has boosted his energy levels and the work rate and the dynamics that he displayed against Denmark to get in behind and beyond their back five showed that he’s got pace and is playing with an absolute freedom.

Saka will test out Emerson, who has come in for Leonardo Spinazzola, the Italian who was on course to be player of the tournament before suffering an Achilles injury.

He is a massive loss for them, but there are still plenty of quality players on both sides.

Italy midfielder Jorginho, whose ice-cool penalty secured passage to the final, could be a contender for the Ballon d’Or this year, having played such a big role for Chelsea in the Champions League.

For England, Kalvin Phillips has been one of the standouts of the tournament. I would never have thought that Phillips would have played that many games and stayed on ahead of Declan Rice, but he’s been absolutely magnificent.

And I can’t speak highly enough of Harry Maguire and what he’s done as a captain and a leader, especially after the incident that he had in Greece. That also goes down as a great example of Southgate’s man management skills.

And then there’s Sterling, who didn’t get much game time at the end of the season under Pep Guardiola at Man City. Southgate has given him licence and he’ll probably get the player of the tournament award if England win.

Of course, I’d love nothing more than seeing England lift their first trophy in my lifetime. But Italy have been my second favourite to watch because of their playing style. Both teams deserved to play off for glory.

Michael Bridges
Expert
Optus Sport pundit Michael Bridges played in the Champions League for Leeds United as a striker alongside Harry Kewell before ending his career in the A-League. He represented England at under 21 level.
close