Tupou rewarded with starting spot after Brisbane blockbuster from bench

Taniela Tupou has been chosen to start for the Wallabies in second eToro Test against France in Melbourne on Tuesday night after his explosive performance off the bench in Brisbane.

Taniela Tupou’s inclusion is the only change made by Wallabies coach Dave Rennie, who has picked the same game day squad of 23 for the first time in consecutive matches since taking the job in 2020.

Tupou will combine with Queensland teammate Brandon Paenga-Amosa and  James Slipper in the front row, with Allan Alaalatoa coming out of the starting side.

Rennie said: “Taniela made a real impact on both sides of the ball when he came on in at Suncorp Stadium and we’ll be looking for him to do the same from the get go in Melbourne.”

“We’ve worked hard and we’re well conditioned. A lack of accuracy in Brisbane denied us the opportunity to make the most of that, but we showed plenty of character to stay in the fight until the final whistle.

“We need to start fast, be more clinical and turn pressure into points at AAMI Park on Tuesday night.”

Returning Rebels lock Matt Philip will play at AAMI Park for the first time in over 12 months, partnering Lukhan

Rennie resisted calls for Tate McDermott to come in after his big role in the Wallabies late thriller in Brisbane. 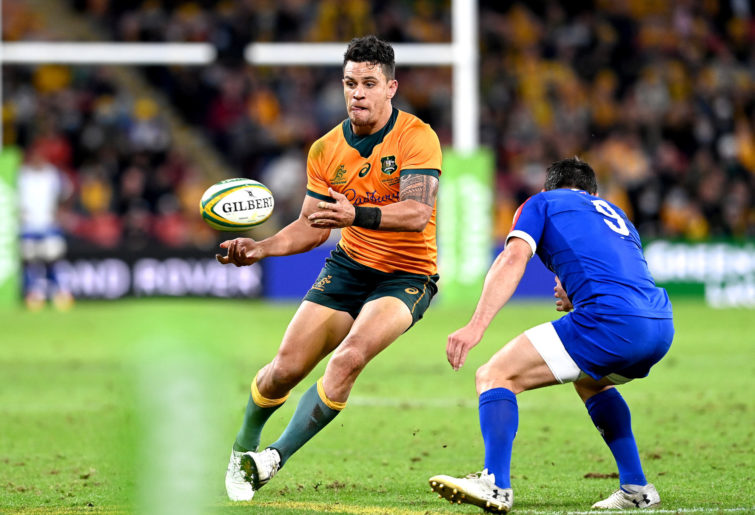 Matt To’omua of the Wallabies passes the ball. (Photo by Bradley Kanaris/Getty Images)The final Test against France is on July 17 in Brisbane  with the opening Bledisloe Cup match against New Zealand in Auckland on August 7..