How will the Wallabies break down the blue wall?

It is one thing to know the nature of a problem in theory, it is quite another to solve it in practice.

Before the first Test at Suncorp Stadium, Wallabies’ head honcho Dave Rennie showed that he was well aware of the issues arising from a defence coached by Shaun Edwards.

» REPORT: Jaminet’s boot powers France to memorable win
» Wallabies vs France Game 2 blog: All the action as it happened
» WATCH: The powerful scrum that won the game for France
» WATCH: Tupou turns into scrumhalf with sensational pass
» WATCH: Stunning Koroibete try called back by TMO

Rennie knew beforehand that France would kick the ball a lot, and rely on their defence to shut down any counter-attacking opportunities for Australia on the chase.

“I think what we’ve seen with Shaun Edwards going there…obviously it’s a massive defensive focus but they’re kicking the ball a lot more too.

“When he was with Wales, if they’ve gone two or three phases and haven’t got what they want, they’ll kick because overplaying and turning over ball when your defence isn’t organised …you can get punished.

“But what that does is provide us with opportunities, because they are going to give us a lot of ball.

“We treat counterattack as a set piece. We’ve got a lot of structure around that and it’s going to be important. They’re going to kick a lot of ball to us.”

The Wallaby coaching staff could have no complaints indeed, about the amount of territory and possession they enjoyed as a result of the basic pattern of the game.

Those raw stats, taken in isolation, would be more than enough to achieve a comfortable victory – or so you would think.

Scratch the surface, and a very different picture emerges.

For a start, France made twice the number of clean breaks (four versus a mere two by Australia), despite their beggar’s ration of ball. They restricted the Wallabies to two tries generated by goal-line pressure, and conceded nothing from positions further out.

The main reason behind those statistical anomalies was Shaun Edwards. Edwards was the coaching mainspring behind Warren Gatland’s successful 12-year stint in Wales.

Make no mistake, Gatland could not have achieved that half-dozen Six Nations titles, three Grand Slams and two World Cup semi-final appearances without Edwards by his side.

When he moved across the channel to France after the 2019 World Cup, the French could not believe their luck. They offered him a four-and-a-half-year deal, compared to paltry two-year offer from the WRU.

As Edwards commented, “I’ve got two daughters and a son to keep – and if you get a four-and-a-half-year deal, which is what I’ve always had before, compared to a two-year deal, well there’s obviously no choice really, is there?” 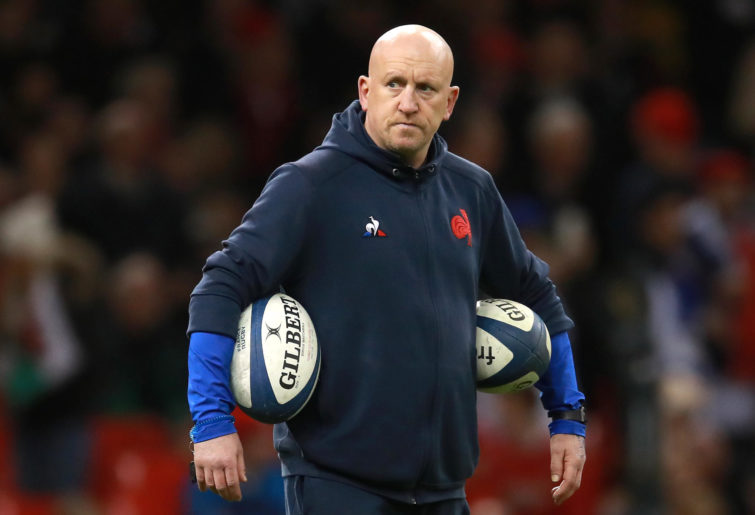 It was no coincidence that the Welsh defence immediately tumbled back down to the foot of the mountain upon Edwards’ departure, while France became the championship contenders they always ought to be.

Dave Rennie might have known what was coming, but in the event he and his support coaches were powerless to stop it – not least in the area he mentioned in his interview, on kick returns.

France kicked on 21 occasions in the game, and Australia got nothing out of the return. Let’s take a look at some of the reasons why. The first French exit of the day set the tone.

As Noah Lolesio shifts the ball infield to Marika Koroibete, the French shape on the chase becomes clear. 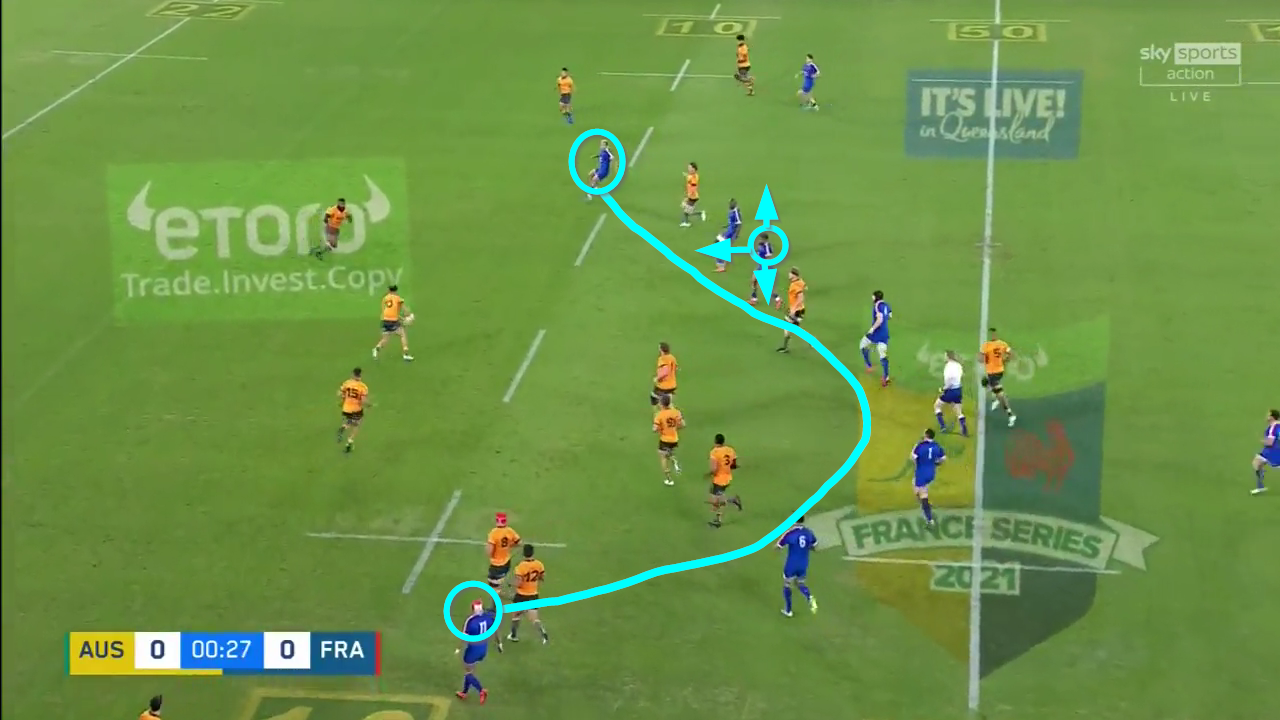 There are two ‘horns’, one at each end; left wing Gabin Villiere on the edge and number 13 Arthur Vincent in midfield. The idea is to close down the width of the field and funnel play back into the ‘bull’ in the middle, France number 12 Jonathan Danty.

Danty is built like a pocket battleship, and he played like a battleship in a sea of tugboats at Suncorp. The play duly comes back to him, and there is a five-second delay in release at the ruck. Two plays later, France were almost away under the sticks for a cheap intercept try.

Again, it’s Danty at the centre of the tackle, and the France right wing Damian Penaud is able to break on Tom Banks’ pass out wide.

Matters did not improve when Australia decided to take on the midfield horn represented by Vincent and shift the play beyond him.

Danty makes the tackle on Harry Wilson, and Vincent and France captain Anthony Jelonch descend on the ball like vultures to win turnover.

Rather spookily, Dave Rennie had foreseen this outcome in his pre-match comments too.

“It [Edwards’ French defence] will be a combination of filling the field and post-tackle presence. They’ve got some guys who are very good over the ball.

“They’ll get two in the tackle and try to rip the ball out. We’ve got to be aware of the quality of our ball into contact, and getting body before ball.”

The pattern became a familiar one as the first half developed.

The Wallabies again fail to get the ball beyond Vincent successfully on the return, and Danty knocks down Marika Koroibete so conclusively that he stays down – no easy matter. The result is more slow ball for the home side.

As the first period wore on, the Wallabies’ confidence in their kick return game began to falter, mistakes proliferated, and the number of French ‘wins’ multiplied.

In the second of the two clips, it is Danty again, this time using a cannon of a right boot to send the ball all the way down to a spot just outside the Wallaby 22.

Tom Banks in particular began to feel the pressure at the back for Australia.

It is probably best to draw a polite curtain over events at the kick return at this point in proceedings. Up until the 50th minute of the game, France won eight out of eight kick return/chase situations which had arisen, and the die had been well and truly cast.

Jonathan Danty meanwhile, went from strength to strength. Whatever damage he can do as a tackler, you can double or even triple it on the deck after the tackle is completed. He won four turnovers on the ground in the course of the game, and proved to be an immoveable object for the likes of Hunter Paisami in the Wallaby midfield.

That final turnover came only 40 seconds before the final whistle and by rights, it should have been the final nail in the Wallaby coffin. But as the old saying goes, “It ain’t over, ‘til the fat lady sings” – and she had one last surprise up her sleeve.

Summary
Dave Rennie will be disappointed, and more than a little concerned that his kick return team enjoyed so little success against the French chase defence. Nothing that they tried came off, and it was an area of conspicuous success for France defence coach Shaun Edwards.

Edwards has of course been dishing out the same treatment to opposition attacks for many years with Wales. During my time working for England, his defence always ranked in the top two in the world.

In the process, the Wallabies will have to discover methods of dealing efficiently with Jonathan Danty in the French midfield. Whoever thought that Virimi Vakatawa would be impossible to replace, must now be reconsidering their options.

Danty was a monster at the Suncorp, and the most dominant physical force in the middle of the field. He knocked down all-comers in the tackle, and he was an even bet to win the ball on the deck after one had been made. Australia had nobody to match him.

Shaun Edwards has thrown down the gauntlet – but can Dave Rennie and his coaches rise up to the challenge in the final two Tests?