Six talking points from AFL Round 17

Hot damn, the season is flying by! Five days of footy made for one of the most peculiar rounds yet. Here’s some fresh talking points.

Four weeks of hell for the Tigers
A moment that caught my eye: Jack Riewoldt suggesting on Fox Footy early last week that other teams should be nervy playing the Tigers in the run home. “Good luck if you’re playing us in the last seven weeks”, the forward prognosticated.

That’s a statement that was overly optimistic at the time, given the Tigers’ horrendous recent form, but downright laughable in the aftermath of their loss to the Magpies.

For three of the game’s four quarters, there were shades of the Tigers that won premierships: they punished Collingwood for mistakes, they were back to near their best in pressure and really, they looked to be winners long before the final term.

But their last term capitulation is something I don’t quite remember seeing from the Tigers in recent years. It’s now their fourth loss in succession, but unlike losses against St Kilda and the Suns, this is a game they had all but won – which, for mine, makes it all the more disappointing.

For a comparable result one can look to Richmond’s game against the Eagles a few weeks ago. In that clash, Richmond’s premiership aspirations were bruised but not buried – a 20-something point lead turning into a close loss. That was explained away as precisely that: the Eagles are a good team (… kind of?) and the Tigers would bounce back. Right? Right…?

It’s the uncharacteristic defeats against teams that the premiership Tigers – only one of which is realistically in finals contention – that have the vultures circling.

And I’m not sure it gets any better as they enter the final stages of the season: they have games against premiership contenders (Brisbane, Geelong), chasers (Freo, Giants) and wooden spooner contenders (Kangaroos, Hawks). None should be scared.

There is a not insignificant part of me that adamantly refuses to rule out the Tigers as a top eight, let alone premiership, force. Even so, Riewoldt’s comments have fallen well flat on latest evidence.

Port all style, no substance as wasted season looms
While we’re on innocuous comments that seem ridiculous in hindsight, Port Adelaide coach Ken Hinkley suggested a fortnight ago that discussion surrounding the Power’s record against top eight teams was “a waste of breath and a waste of time”. Perhaps it was recency bias when he mused that, as his side has just completed a win over Sydney; perhaps it was a weird, misplaced confidence from the coach.

For mine, they are comments that are a classic, annoyed deflection from a very real problem. The aforementioned Sydney win stands as Port’s only win over a current top eight side this year, with the Power losing to all of the current top four – including the Demons.

On Friday, the Dees made a task usually considered difficult – beating Port in Adelaide – look easy, as they absolutely monstered the home side in the midfield and continued a trend in which the Power struggle to have any effectual response when put on the spot against the best.

The Power aren’t in the realm of the Tigers nor the Eagles – there is very little chance they miss finals – but given their struggles against fellow finalists defies description, it’s difficult to foresee them making much of a dent in finals unless they change that in the limited chances they have. The club only has one more fixture against a current top eight side: the Bulldogs in Round 23, but even so,

It’s unsurprising why Hinkley suddenly changed his tune after the Dees’ loss: he now notices a “gap” between his side and other premiership competitors. A gap that’s been noticeable for a long, long time.

The Saints’ newfound niche: frustrating contenders at critical times
The Saints resurgence in the past few weeks has genuinely puzzled me. I’d long accepted that in the broader scheme of things, the Saints’ 2020 – top eight finish, elimination final win, semi-final loss – was looking like the exception and not the norm. And many of their performances this season have done nothing to convince me otherwise. Until they ran into Richmond.

Like the Tigers, it’s the last few weeks that have truly defined the Saints season. Ever since they conquered the Tigers – a clash coming after they blew two winnable games – the Saints have found their new mojo that doesn’t appear to be an aberration on a confusing season.

They’ve defeated the Lions when that side was gunning to lock in a top four side and contributed to Robert Harvey’s troubles as new Magpie’s coach. Provided this isn’t an aberration, the Saints have the chance to inflict more pain against sides who simply cannot be dropping games: Port, the Eagles, Carlton.

May the Saints come marching in.

Carlton’s run home both a blessing and a curse
If there’s been one saving grace from a disappointing season, it’s the fact that the Blues have a relatively easy run home: excluding Saturday’s clash with the Cats and Round 22’s difficult encounter with the Power in Adelaide, the Blues have good run of clashes – with the added benefit of all of them being played in Melbourne.

They face the Magpies, North Melbourne, St Kilda, the Suns and GWS in the final weeks of the home-and-away season. None of that quintet are the bastions of consistency, and if they’re genuinely fighting for a finals slot, the Blues should be winning most of them.

The problem for me is that if – and this, of course, is a big if – they’re to replicate their performance against Geelong against any of the other sides, they’ll be in serious trouble. I’ll pencil in a loss against the Power – again, no wins against top eight teams doesn’t bode well – while the Magpies, Suns and St Kilda all are all in the midst of good form. Only North seems like the most obvious chance at locking in a win, maybe, while who knows which GWS will turn up.

We saw the return of the Geelong classic: win without looking impressive. But the Blues’ woeful skills cannot appear again, even with a good fixture: any and all of the sides they face have proven they can take full advantage.

The league’s youngest teams flip the script
The Giants ‘hosting’ the Gold Coast Suns in Ballarat was a very unusual fixture, and it got an expectantly unusual result. Not only because it was the ‘home team’ with much, much more on the line – finals – but because the league has grown so accustomed to one way traffic in terms of results between the two sides.

If you exclude the earliest years of the Giants being in the AFL, where the Suns garnered four wins in this match-up between 2012 and 2014, it’s been a fixture dominated by GWS. They were usually the type of loss that frustrated the Suns – and encouraged criticism.

How has the second youngest team in the competition become a foil for the youngest side? And, further to that, the shocking development differential between the two sides was more than evident in the ten consecutive wins to the Sydneysiders.

You cannot go as far as suggesting that Sunday’s win – by the narrowest of margins, at a neutral venue – is redemption for their losing streak, but for a Suns’ side generally horrendous in the second halves of seasons, their second win in succession is beyond encouraging. The fact it’s their second consecutive win frustrating a scrapping-for-finals side is just a bonus.

And just quickly, the remainder of the “battling for finals” pack have a mixed weekend (bold this)
Beyond the Saints, Giants and Blues, there’s four other teams that I see, realistically, fighting for two finals spots.

There’s West Coast and Richmond – two very good teams having very poor seasons – who are threatening to cede their finals spots. Richmond we’ve talked about, the Eagles suffered a horrid loss to last-place Melbourne. That pair of losses opened to door for two other teams: Freo and Essendon.

That duo is competing for strongest Round 17 win of the pack; I’ll give the marks to Freo for breaking a Tassie losing streak and the fact that I don’t believe Essendon’s ‘challenger’ of traffic cones is a league regulated opponent.

Everybody gets a turn
Adelaide Crows – It’s perhaps no coincidence the Crows slotted their lowest score this season (and in their history) the week when Taylor Walker was out of the team.

Brisbane Lions – Eric Hipwood’s injury not only a personally devastating affliction, but a structural one. Be interested to see how the Lions deal with losing their third most potent forward.

Collingwood – Former Adelaide coach Don Pyke has publicly confirmed he’s thinking about the Magpies vacant coaching job. That would be an … interesting choice, given his recent history. 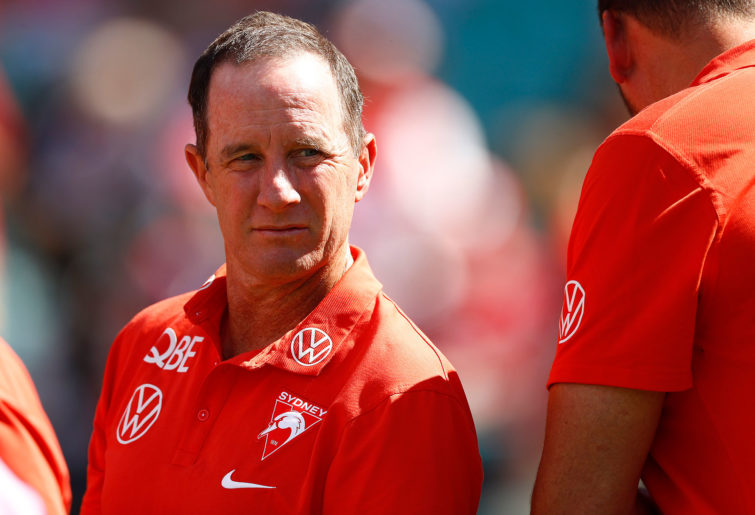 Essendon Bombers – Nice to see the Bombers have a genuinely worry-free victory for once. Big win, no injuries, still in the finals race.

Fremantle Dockers – Bailey Banfield returning into the side from injury and scoring three goals ain’t a bad first 2021 outing.

Geelong Cats – A massive Thursday night game upcoming with the Dockers. Favoured for very good reason, but an upset here is a possibility gaining steam.

Gold Coast Suns – The fact that Matt Rowell had a quiet game – his least effectual of the year – and they still won can only be a good thing.

GWS Giants – A golden opportunity gone. The Swans and Essendon in the next two weeks make-or-break-time for the Giants. Lose both, and goodbye finals.

Hawthorn Hawks – In a familiar theme for a few sides this week, a major talking point from their loss is the injury to Changkouth Jiath. Horrible, given how good he was during the game up until he was subbed out.

Melbourne – The Doggies’ loss on Sunday means the Demons are back on top of the ladder. They should be safe there for at least a fortnight: barring any upset losses to the Hawks or Suns.

North Melbourne – I’m writing this as they sing the song, so I’ll type my immediate thoughts: incredible win, and seeing David Noble so ecstatic makes me smile. A lot.

Port Adelaide – Zak Butters can’t take a trick – subbed out with a knee injury in his return game. Genuinely gut-wrenching.

Richmond – Mentioned him already, but I’d be remiss if I didn’t note Jack Riewoldt eclipsed the 700 goal marker in their loss. Great work.

St Kilda – I’ve been screaming it from rooftops for a long, long time, but Jack Steele continues to remain an underrated star.

Sydney Swans – Fitting they played the Bulldogs on the weekend – they’re gunning for top four, but even if they finished outside the eight they’d be a decent chance to replicate the Dogs and run for the premiership from outside the eight.

Western Bulldogs – Jamarra Ugle-Hagan’s debut was quiet and not the result he’d have wanted, but I find myself agreeing with Luke Beveridge in saying that