After going down in the final game of series for the second year running, despite being overwhelming favourites on both occasions, key NSW coaching personnel – namely Brad Fittler and Greg Alexander – have been forced to answer a series of questions regarding issues such as team selection and game plan.

Their responses have been frosty at best.

But the questions have been entirely reasonable and warranted. In black and white, Wednesday night was a bottle job by NSW.

Fittler in particular can blame the officials and whatever else all he wants, but a professional rugby league team should not be losing to a side they had, only weeks earlier, beaten for the second time across two games by a combined margin of 76-6.

Indeed. Games 1 and 2 of this year’s series showed the true parity between NSW and Queensland in the present day, and despite the first choice NSW halves being absent for Game 3, it should have been another victory for the Blues on the Gold Coast. They still had James Tedesco, they still had Tom Trbojevic and they still had Latrell Mitchell.

Thankfully for NSW though, Game 3 of this year’s series wasn’t a decider. Due to the brilliant work of Fittler, his coaching staff and the players in the first two games of the series, the Blues had already wrapped it up.

But it’s a three-game series, and for all the hurt Queensland have caused NSW over the past 15 years, the Blues needed to make a statement this year to start seriously righting the wrongs of the past. 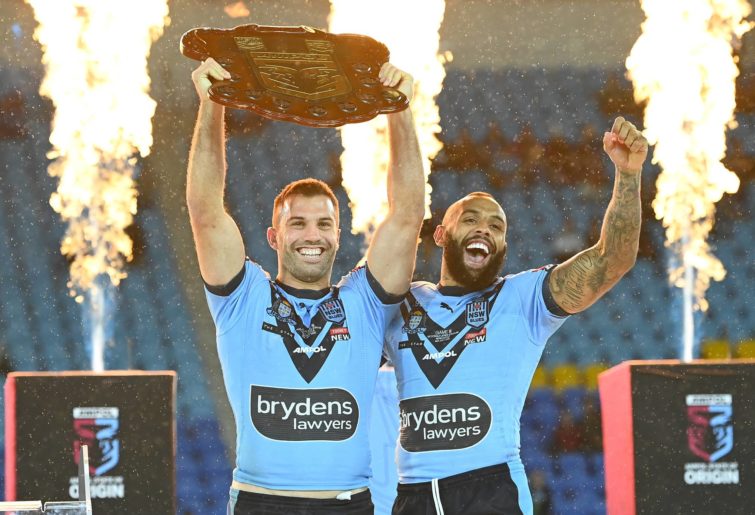 So fast forward to 2021, and despite all three games being played in Queensland, NSW should have won the series 3-0. Yes, Nathan Cleary, Jarome Luai and Daniel Saifiti – who’s absence in particular has been understated – were huge losses. But this is where the problems began for Fittler and his coaching staff.

For a start, Adam Reynolds and Cody Walker are the third best halves pairing in the NRL behind Cleary and Luai at Penrith, and Cameron Munster and Jahrome Hughes at Melbourne. Furthermore, both Reynolds and Walker have played Origin in the past. 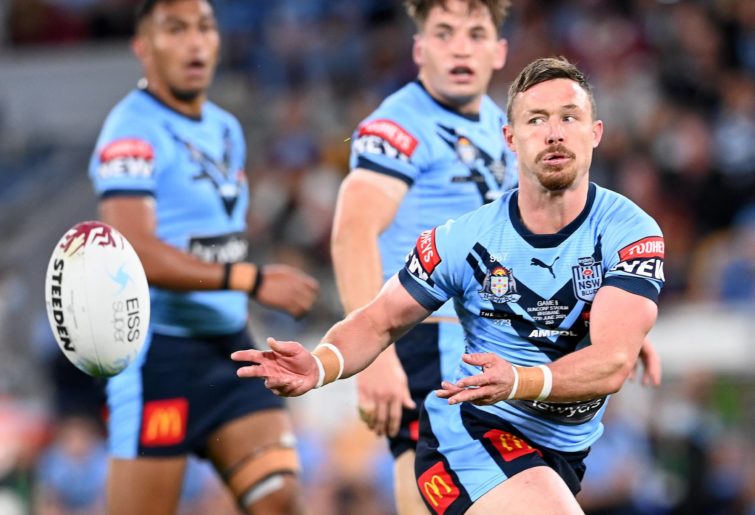 Do you see where this is going?

Getting into the weeds of it, Cody Walker and Latrell Mitchell have an almost telepathic combination down the left edge. Low and behold, Mitchell plays left centre for NSW.

Both Reynolds and Walker feed off the dynamism of Cook and Murray through the middle third. If you go back and watch Wednesday’s game, Murray moved into the middle for large parts of the match to allow Liam Martin to occupy the right edge.

To round it all out, Adam Reynolds has one of the best short kicking games of all time. That’s right, of all time.

But somehow, inexplicably, they weren’t picked.

And for the second year running, the Blues coaching staff have gone on the defensive and relied on a counter argument that “hindsight is a wonderful thing”.

So let’s time travel back to 2020. After a poor showing in Game 1, where the Blues were ambushed by a Queensland side led by a hungover Cameron Munster, NSW came roaring back in Game 2 with a 34-10 victory at Stadium Australia in Sydney.

But all was not well at the end of that game. Specifically, Queensland coach Wayne Bennett was laughing in the sheds – something a coach is not supposed to do after seeing their team get flogged. But the simple fact was, Bennett knew there was a series decider to come and he knew that it would be at Suncorp Stadium.

So NSW had to improve. They had to throw all of their eggs into the one basket and go for the jugular in Brisbane. Specifically, they had to make a tough call to drop one of the four forwards named on the bench for Game 2, and instead name the man who had won the Clive Churchill Medal only a few weeks earlier in Ryan Papenhuyzen.

The Melbourne fullback, when he is fit and healthy, is one of the most elite players in the entire NRL competition.

He can turn a game with one carry through his blistering speed, agility and game awareness. And before you think to yourself that an out and out fullback has no place on the bench, think back to when Papenhuyzen debuted for the Storm in 2019. Low and behold, he played and dominated off the bench.

This isn’t even about James Tedesco getting knocked out in the 2020 decider – as you cannot anticipate something like that happening – but rather, this is about NSW needing to have picked a more balanced bench to try and win their first decider in Brisbane in 15 years. 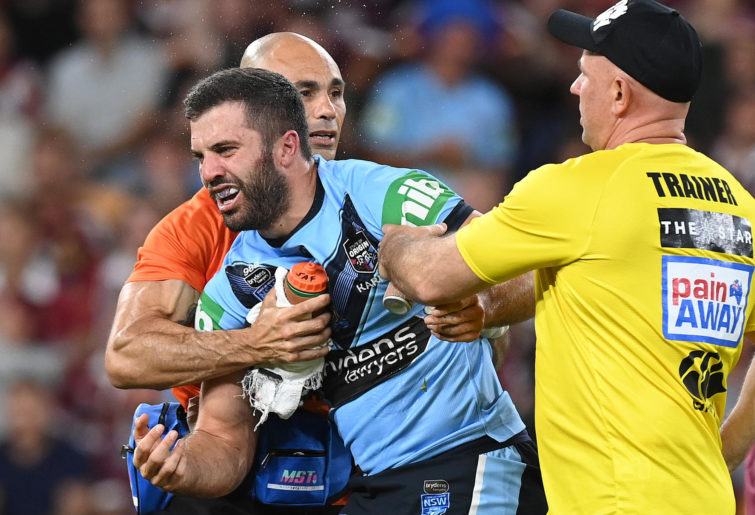 This year, Greg Alexander is saying the same thing about the non selection of the South Sydney halves.

Sorry, but that just doesn’t fly here. Both selections – Papenhuyzen in Game 3, 2020 and Reynolds and Walker in Game 3, 2021 – should have been made from the get go.

The reasons provided by the Blues brains trust for not picking Reynolds and Walker have been unclear at best, but one thing is for certain – the Blues love to reward players who have been a part of the squad throughout the series.

So when news filtered through on the night before the Game 3 teams were picked that Jarome Luai would be ruled out, Greg Alexander did not hesitate to say on Fox League that Jack Wighton would be the NSW five eighth.

This was somewhat troubling, as Wighton had only hours earlier turned in one of the most ordinary performances of his career in the halves in a game where his Canberra Raiders were annihilated by the Gold Coast Titans in Canberra.

The following day – only hours before the NSW team for Game 3 was finalised – Cody Walker and Adam Reynolds put the cleaners through the West’s Tigers at Leichhardt Oval. All to no avail though. Fittler and his coaching staff had seen enough from Wighton in camp over the first two games and he would be rewarded with one of the most prestigious jumpers in rugby league – the NSW number 6.

To partner him in the halves, would be the youthful Mitchell Moses as this would ensure the Blues we’re keeping “one eye on the future”.

Whether that future included a clean sweep in Game 3 however, will never be known.

This is not a knock on either player selected in the halves for Game 3. Mitchell Moses and Jack Wighton are both great players. Wighton in particular has turned in some rousing performances for NSW in the past and he’s also won a Dally M and Clive Churchill medal. But for this game, there was simply a better option and that was to go with the South Sydney halves.

The notion of staying loyal to members of the extended squad also saw Api Korisau and Dale Finucane come into the side for Game 3. While Korisau played very well and even scored a try, his role didn’t appear to be overly clear. For Finucane, he was replacing arguably the best yardage front rower in the game in Daniel Saifiti.

As Paul Kent pointed out on NRL 360 while questioning a highly defensive Greg Alexander, this was not a like for like replacement and all things considered, it probably didn’t have the desired affect.

Again, this is not to suggest that either Korisau or Finucane were undeserving of their Origin jumpers, but the simple fact is both were picked because Fittler and his coaching staff wanted to reward them for being part of the extended squad earlier in the series. Sometimes, this kind of sentiment isn’t what’s needed to win.

The counter argument here is likely that Fittler has done a brilliant job fostering a culture that makes the Blues players want to play for each other and that rewarding squad members is a byproduct of that culture. But it can’t be a one size fits all approach.

Sometimes you need to think outside the square and make tough calls to achieve excellence – just like they did by dropping Latrell Mitchell when it was warranted in 2019. But the Blues coaching staff dropped the ball in Game 3 this year. Just like they did in 2020.

So while Brad Fittler, Greg Alexander, Danny Buderus and Craig Fitzgibbon have done a remarkable job for NSW since 2018 – winning three out of four series during that time – there is still room for improvement if they want to make up for the lost years of 2006-2013 (and 2015-2017).

To restore balance to State of Origin, they need to go to the next level. But it starts with acknowledging that there is improvement to be had.