Ten things about rugby league changed forever by the pandemic

THE rugby league we are left with when Covid is finished with us won’t be the same as the one we had in February of last year.

Of course, rugby league can’t have a ‘new normal’ because it never really had an old one. There was always some crisis, some death rattle, some atrocity. People were always at each others throats. Thanks why we love it – and sometimes why we hate it.

But I thought I’d have a go at listing 10 thing that have changed during the pandemic that won’t be changing back in a hurry.

By kickstarting the NRL at the beginning of Covid and getting it back on the field before most sports in the world, V’landys shored up his power. In fact, he had enough brownie points to take ‘Magic Round’ literally in that he made players disappear for any tackle that made contact with an opponent’s head.

Without Covid the fans might have remained sceptical of the new sheriff and if he’d overstepped what people saw as his decent amount of authority, he may have found himself walking the plank. As it is, even allowing the broadcaster to give some of the NRL’s rights money to rugby union doesn’t seem to have hurt him.

The six-again rule is far from popular. There’ve been a lot of blowout scores. But when V’landys was asked if it had gone badly, he’s dug his heels in. Likewise things like two point field goals. Long after we’ve forgotten whose bed it was that Jack De Belin was hiding under, we’ll probably still have some of these rules. Hopefully not – but probably.

Former NRL head of strategy Shane Richardson has publicly predicted another Kiwi franchise will be next. In the case of Brisbane, it seems more market exploitation than expansion but anyway … it’s coming.

4. The relationship between the NRL and the international game has changed

In 2018, England, New Zealand, the International Federation and Jason Moore went ahead with a mid-season Test in Denver despite the disapproval of the NRL clubs. The NRL clubs got even by scrapping the entire mid-season window. How will they get square for this week’s announcement that the World Cup is going ahead whether Australia go or not?

The question is complicated by the fact the now-IRL is dominated by Australia, with Wayne Pearce and Peter Beattie on it. How did they vote on the World Cup issue? In any case the international game is showing some bravado.

Playing State of Origin games at neutral venues used to be such a big deal but now we do it at a few days’ notice. Newcastle, Townsville and the Gold Coast getting one would have been the subject of a decade or politicking at any time in the past. Will officials now believe they’ve had their chances and go back to Sydney and Brisbane indefinitely?

Forget NSW dynasties, by the way I’ve been covering grand finals since 1987 and every winning team always predicts they’re going to win the next five. Means nothing.

6. Match programmes are dead in Australia

Big League was one of the first things for the high jump when Covid happened. It closed and will never reopen. Of course, you could see it coming a mile off. None of the Great Britain Tour or Oceania Cup games in 2019 had programmes and nor did the World Cup Nines. Still, sad.

7. British rugby league is on its knees

As much as I hate to say this on Challenge Cup final week, the British game is a mess with TV rights just about halved and teams not fulfilling fixtures (that’s aside from official Covid-related cancellations and postponements).

The sport can’t afford to put players in bubbles and games get called off because of cases and contact positives every week. And now the NRL is spending too much money to be the knight it may otherwise have been. It can lend expertise but not investment – and the English don’t seem to want to help themselves.

Toronto were struggling with a small squad, no Super League wins and unpaid bills when Covid hit but they still may have limped on to the end of the season with new investment on the offing. Sonny Bill Williams may be still playing, they may have hosted Australia on the way to a 2020 Kangaroo Tour and the Northern Hemisphere game would have held onto a smidgeon of optimism. Instead … withdrew from the comp, kicked out of the comp, joined a new North American comp which never got off the ground. What a bummer.

When Covid hit, Sydney Roosters still had Boyd Cordner and Leeds Rhinos still had Stevie Ward. They won’t be with us when it’s all over, forced into early retirements by head knocks. The game was “serious” about concussion before – but now the threat of legal action has led to some of the physicality being removed. It’s now more of a frenetic athletic endeavour than a brutal collision sport. That isn’t coming back. 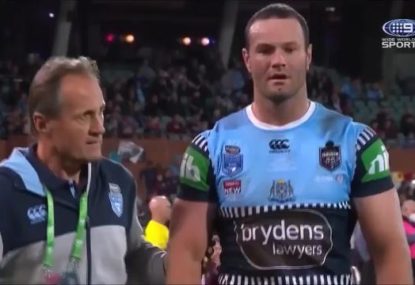 We still have scrums in the NRL but we don’t have them in England. At the very least, they’ve been illustrated as being expendable. Of all the reasons you might say the Northern Hemisphere game is inferior to the south, you wouldn’t be chiding “well, we’ve got SCRUMS!’

In fact, you don’t notice them when they’re not there. PVL got rid of the second referee to save money after the TV rights belt-tightening and like scrums in England, they’re not really missed. People watching YouTube videos in 2030 are going to think they’re seeing double. An experiment that didn’t last.

Maybe six-again will be the next one? We can only hope.