Marika Koroibete, the standout star of the second Test, was given a red card for an illegal challenge less than five minutes into the third and deciding showdown against France at Suncorp Stadium on Saturday night.

Koroibete flattened French No.8 Anthony Jelonch and after a TMO review that lasted several minutes and repeatedly looked at multiple angles, he was sent off. Jelonch who appeared to lower his height as Koroibete smashed into him, sunk to the ground theatrically, further angering the Brisbane crowd.

“If you’re playing in the spirit of rugby that’s not something I guess you do.”

Wallabies coach Dave Rennie also suggested the French player had play acted when he said: “There was a couple of situations where our guys got clocked in the head but they didn’t stay down. They just get up and get on with it.
So maybe that’s the difference.”

The Wallabies had already lost their other starting winger, Filipo Daugunu, to a wrist injury within the first minute. But Australia produced an incredible effort to edge France 33-30 and win the series 2-1. 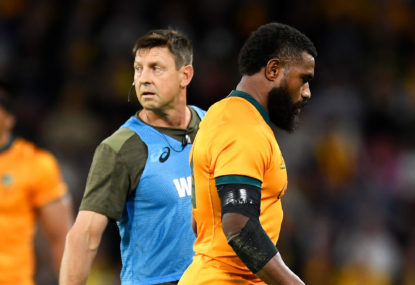 Australia captain Michael Hooper was angry with the decision and suggested his opponent had made the most of the contact while former Test star Tim Horan said: “I’m all for the welfare of players but that’s a real poor call by the officials and referee Ben O’Keeffe.

“I thought he got sucked into it by Jelonch. There was a mitigating factor – I thought he lowered his body height. I thought Marika Koroibete hits him around the chest and of course the head is going to come forward with force.

“I thought it was a great tackle, a great shot and the Wallabies are now going to have to play with 14 and adapt.”

Former All Black Andrew Mehrtens also disagreed with the call.

“That’s an absolute travesty and we need to hear more about this,” said Mehrtens on the Stan Sport coverage. “They painted themselves into a corner by saying it was foul play and saying there was no mitigation and I think they’re wrong on both counts.”

Former Australian skipper James Horwill had some sympathy for the Kiwi ref.

“It’s a very tough situation World Rugby has put Ben O’Keeffe in there because any contact with the head, they’re saying, is a red card. But there were mitigating factors – both players were ducking and that’s where they need to take a commensense approach and go look it was an accident and move on and hopefully don’t ruin the game.”

The Wallabies did well to stay in the game and went into the rooms level 20-20 at halftime, but fans and players alike, took to social media to make their anger known.

If the ref isn’t sure it’s a penalty it just can’t be a red card. Awesome tackle from Marika… #AUSvFRA #rugby #imallowedtosaythisattheminute

I’ve been in matches when red cards ruin games!! What’s the rules?? Can the red card player be replaced after 20 or are Australia down to 14 for the rest of play??#AUSvFRA

I’m all for player welfare and protecting against careless high tackles,

He clearly dipped, and it wasn’t 100% clear and obvious shoulder to head?

Series ruined. Officials need to sort this out ????????‍♂️#AUSvFRA