Nicho Hynes delivered another starring performance in Melbourne’s 48-4 win over Newcastle, making a case to stay at fullback when Ryan Papenhuyzen returns.

Hynes scored a try and set up three others in the eight-try romp at Cbus Super Stadium and kicked all conversions for a personal tally of 20 points.

Initially only an injury cover for star Ryan Papenhuyzen, Bellamy may find it hard to dislodge Hynes from fullback – rewarded for his stellar form with a call-up to the NSW squad as 18th man for Origin 3.

Papenhuyzen has been sidelined with concussion symptoms since Magic Round mid-May and has started some contact training.

Bellamy said Hynes, who will join Cronulla next season, had grown as a player to become an invaluable cog in the Storm machine.

“Nicho has just got better and better as the year has gone on,” Bellamy said.

“For him to come back after Origin with his head fully on … it was a big week for him.

“He didn’t get to play but to actually just be picked in the NSW squad was such a big thing for him.

“But his performance, especially in that first half, was outstanding.”

Bellamy said he hadn’t decided what he would do with Hynes when Papenhuyzen returned, with the latter challenging as the game’s best fullback before his sickening head knock.

Both players offer utility value off the bench.

“When Paps gets the OK to play and puts his hand up to play that’s when we will start making those decisions,” Bellamy said.

“I’d like to think he’s getting real close so we just need to give it more time.

Bellamy said that winger George Jennings, who scored two tries, had suffered a PCL injury while Dale Finucane is also likely to miss the clash with North Queensland next Friday after failing a HIA.

This is the third article in a series naming each club’s best team of loyal stalwarts. Not necessarily just one-club players, but those who turned out for the club over a long period and helped build its success and culture.

Sharks back in finals spot after Broncos win

The Sharks came from 10-6 down to beat Brisbane and jump back into the NRL’s top eight with one round to play.

Sharks back in finals spot after Broncos win

The top eight dream is still alive for Cronulla after sealing a record 50-20 win at Rockhampton that has all but ended the Wests Tigers’ NRL finals chances. 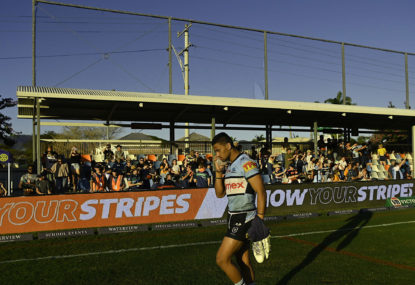 The NRL integrity unit is investigating police reports that Cronulla Sharks’ Josh Dugan has breached the state’s COVID laws in Lithgow, NSW, according to a media report.