Deano, Boonie and co: The 1984 debutants

This will be the last article in this mini series.

I selected the year 1984, as my love for the game of cricket reached its peak during this year. The previous northern winter had seen me join ‘The Sound of Summer’ of ABC radio. Here in Bangladesh, BTV was giving more time to cricket in response to the rapidly growing popularity of the game.

On the field, the West Indies reigned supreme, winning 11 consecutive Tests against England and Australia. With a settled look about their team, only two fast bowlers made their debut in 1984.

One of them, however, went on to become one of the greats of the game. England’s case was exactly the opposite, with the team struggling to get the results and eight players were given their Test debuts. Australia saw six new entries in the baggy green camp. Sri Lanka saw a champion batsman make his debut at Lord’s in the summer.

Chris Broad (England)
Chris Broad loved batting overseas, especially in Australia. He averaged over 57 in away Tests with his average in Australia being especially impressive, 78.25. But in his home country he only averaged a modest 26 with the bat.

Called in to the England team for the Lord’s Test, following a humiliation at Edgbaston, Broad made an immediate impact, scoring 55 and sharing a century opening stand with Graeme Fowler on the rain-affected opening day. For the rest of the series, he made a number of good starts but failed to convert these into meaningful scores.

The selectors were especially irked by his opening-day effort in the third Test at Headingley. After defying the holy trinity of Malcolm Marshall, Joel Garner and Michael Holding in the morning, he fell to the gentle off spin of Roger Harper, half an hour after lunch.

He did score 86 at Lord’s against the Sri Lankans later in the summer, but he took almost six hours for his runs against an average attack.

So Broad was unceremoniously dropped from the team to travel to India but he made a triumphant return two years later during the Ashes tour with Mike Gatting’s team.

Tim Robinson (England)
Robinson, Broad’s teammate at Notts, benefitted from his omission from the England team, and after getting his chance, he wasted no time.

He scored 160 at Delhi in December, and then at Headingley smashed 175 in his Ashes debut the next northern summer. Later he added 148 at Edgbaston.

All three efforts led to England victories. But then Sabina Park, Jamaica, changed everything as he became Pat Patterson’s first Test victim. On eight innings in the series, his top score was 43, and he soon lost his place in the team.

David Boon (Australia)
His brave 51 on his debut at the Gabba against the mighty West Indies went in vain, but his 49 at the SCG was a part of a rare Australia success over the Windies during the ’80s.

He disappointed during the Ashes tour to England, but after scoring a couple of hundreds as an opener against India in 1985-86, he didn’t look back. 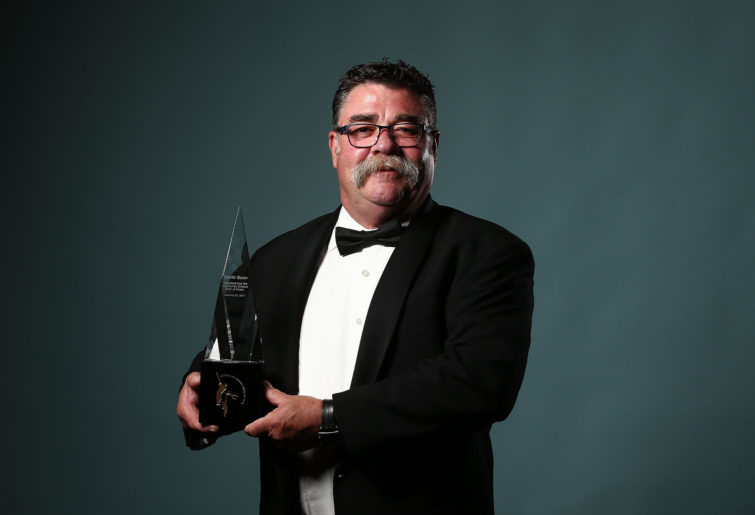 He was a vital member of the group that under the leadership of Allan Border re-established Australia as a major power in the cricketing world.

He had a highly successful World Cup in 1987, and then also contributed in Australia’s first Test series victory for almost four years during the 1987-88 season. I must add that the umpires at the MCG also played their part in the success.

Aravinda De Silva (Sri Lanka)
The first great Test batsman to come from Sri Lanka, De Silva was only 18 when he made his Test debut at Lord’s.

He failed to impress, but then scored couple of fine hundreds in Pakistan in 1985 against a strong bowling attack. Then came a lean period, but he came back to form in a most glorious manner, smashing 167 at the Gabba in 1989.

Dean Jones (Australia)
Australia’s ‘dead rubber specialist’ Deano made his Test debut in the second Test of the 1984 tour to the Caribbean islands against a hostile Joel Garner. He came to the wicket at 5-85 and shared a century stand with Allan Border, scoring 48 himself.

His technique against the short stuff wasn’t immaculate, but he showed plenty of courage and determination in his debut innings, attributes that would help him greatly in his decade-long international career.

The high point of his Test career came at the Adelaide Oval, against Pakistan in early 1990. He scored 116 and 121 not out.

It would be an understatement to say that his exclusion from the Australia team prior to the 1992 series against the West Indies was a controversial one. The controversy is likely to go on for at least another 50 years. 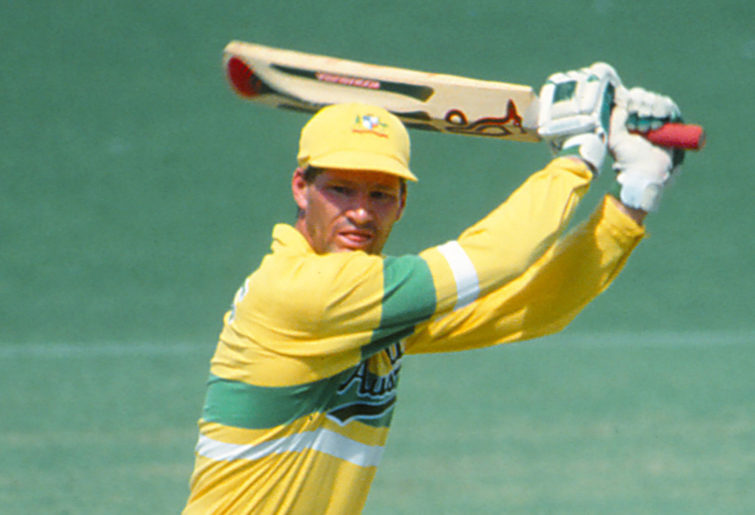 Mohammad Azharuddin (India)
I am not sure why Wikipedia has listed him among the 1985 debutants. His debut Test at Calcutta started on December 31, 1984. In fact, he came to the wicket late on the first day, finishing the day on 13 not out.

The next day was the New Year’s Day, but the weather in Calcutta was unusually gloomy for winter time and the huge crowd at the Eden Gardens went home disappointed after only eight overs’ play. A picture of Mike Gatting playing cards with some England journalists appeared in the Calcutta newspapers the next morning.

The Test resumed on January 3, after the rest day, amid brilliant sunshine. And I was among the 70,000-plus crowd at the Eden Gardens. It wasn’t the most eventful day in Test cricket history, as 172 runs were scored and only one wicket fell. At least, I watched him score a maiden Test ton. He later added hundreds at Madras and at Kanpur.

It’s a great pity that the career that started so brightly eventually ended in complete disgrace.

Anil Dalpat (Pakistan) (wicketkeeper)
An automatic choice in the team for the keeping role, Dalpat only played nine Tests for Pakistan. His lack of ability as a batsman didn’t help his cause. Quite remarkably, he was Pakistan’s unlikely batting hero in his debut Test at the National Stadium, Karachi.

Needing 65 for their first ever home Test win against England, Pakistan looked hapless against the left-arm spin of Nick Cook. At one stage the home side were 6-40, but Dalpat top scored with 16 not out to take his side home for a three-wicket victory.

He is the cousin of Danish Kaneria, the leg spinner.

Richard Ellison (England)
In his short Test career, the Kent medium pacer took 35 wickets from 11 Tests at an average of just below 30. But he can have a legitimate claim to win back the Ashes almost singlehandedly in 1985.

After four Tests, the series was locked at one apiece, with batsmen mostly dominating the affairs. While David Gower and company were scoring freely against an attack led by a 20-year-old Queenslander, Allan Border’s men too were looking fairly comfortable against the Pom attack.

It was the introduction of Ellison for the fifth Test that changed everything. He took 17 Australia wickets in two Tests to help England win the series 3-1.

Quite remarkably, he played only one more Test on home soil after the 1985 Ashes.

Craig McDermott (Australia)
McDermott made his Test debut at the MCG in December aged just 19 and six months after that he was leading the Australia attack in the Ashes. He toiled hard taking 30 wickets in the series.

But the hard work took its toll, and his career became a start-and-stop affair, mainly due to frequent injury problems. Still he enjoyed a long, successful career ending with 291 Test victims. 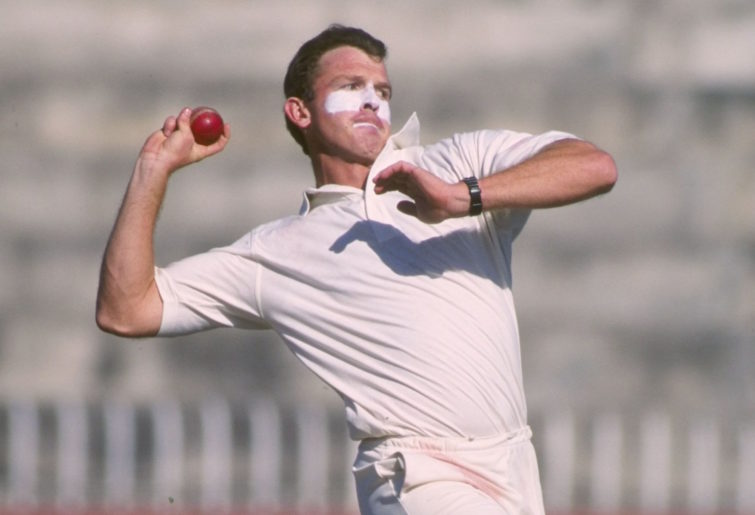 Courtney Walsh (WI)
A genuine number 11, Walsh is picked to bat at number ten here, as Bob Holland was even worse than Walsh with the bat, believe it or not.

Walsh was picked as the fourth seamer at the WACA, but didn’t get a bowl in the first innings as the home side was bundled out for only 76. Walsh bowled the first of his 5000-plus overs in Test cricket in the Aussie second innings and dismissed the left handers Graeme Wood and Graham Yallop.

Fierce competition within the Windies camp meant that he emerged as a regular only during the 1986-87 season. Even then he had to wait until 1994 to regularly get the new ball.

The Windies’ cricket saw a rapid decline from the middle of the 1990s, but Walsh and his bowling partner Curtly Ambrose continued to perform admirably until the end of their careers.

Bob Holland (Australia)
A late bloomer, ‘Dutchy’ was almost 40 when he made his Test debut at the Gabba against the West Indies. He had a short but eventful Test career. For almost three years starting from early 1984, the Aussies managed to win just three matches and Holland featured prominently in all of these.

He was man of the match at the SCG when his ten-wicket haul in the match spoiled Clive Lloyd’s farewell Test. Then at the Lord’s in the summer of 1985, he ran through the England tail on the fourth day to help preserve Australia’s impressive record at the ground. Back to his favourite SCG in November, another ten-wicket haul helped the Aussies beat the Kiwis.

But then the Indians with their excellent technique against the slow bowling showed little respect for him, and this signalled the end of his international career.

Manoj Prabhakar (India) 12th man
On paper, including Prabhakar as an all-rounder in my main XI would have given the side greater balance, but while his batting average of 32.65 is okay, his bowling average of 37 is poor, especially given the fact that he always got the new ball for his side.

He shared the new ball with Kapil Dev in Australia during the 1991-92 series, even though Javagal Srinath was the fastest bowler in the side.

Overall, my team has two decent openers with a strong middle order but the tail is long. The bowling is fine, as long as Ellison and McDermott can remain fit, otherwise there would be extra load for Walsh.

The other debutants
Andy Lloyd’s Test career with England lasted exactly half an hour before a head injury suffered while facing Malcolm Marshall sent him to the hospital.

Tony Pigott, an emergency substitute for the injured pace bowlers, dismissed Bruce Edgar with his seventh delivery in Test cricket at Christchurch, but after taking 2-75 on a bowling-friendly pitch, he never played for England again.

At Lahore, in the autumn, 18-year-old Chetan Sharma shared the new ball with his Haryana teammate Kapil, and bowled Mohsin Khan with his fifth delivery. He took 16 wickets in two Tests in England in 1986.

After making his debut at Karachi, Ramiz Raja had a long career in international cricket, but he never achieved the consistency expected from a top-order bat.