The outrage that followed the red card dished out to Marika Koroibete was hardly surprising.

When you hear the normally measured Andrew Mehrtens sound off then you know there is something very wrong.

What was surprising is that a good section of rugby people, perhaps 30-40 per cent by my reckoning, supported Koroibete’s sending off. A couple of comments stood out to me as particularly trite and misguided:

“More than happy to be part of the problem of protecting players and making the game safer”.

“MK had the option to line him up lower but he didn’t.”

One of the repercussions of the new laws is that we now see rugby players feigning injury and rolling around like soccer stars. But we can just about live with that providing the laws make players safer.

Fact is, there is plenty of evidence the new laws do not reduce incidents of concussion and may in fact increase it!

That evidence has been lost in the trendy and ill-thought-out rush to “be part of the problem of protecting players and making the game safer.”

One of the most comprehensive studies to date took place over 90 games played in the English Championship during 2018-19.

In short, the reduction of concussions caused by high tackles when applying the new laws was noticeable, if arguably negligible.

But don’t take my word for it.

The study was published in the British Journal of Sports Medicine and can be found here.

“I understand the trial saw approximately a 67 per cent increase in concussions, from an average of 0.6 a game in the regular Championship season, to one per match in the Championship Cup.

“The number of concussions from upright tackles did fall markedly – as was hoped – but there was a drastic increase in concussive incidents around the breakdown, when both the ball carrier and tackler were bent at the waist.”

It’s worth repeating. There was a drastic increase in concussive incidents when both the ball carrier and tackler were bent at the waist.

Not just that, there was a 67 per cent increase in concussions full stop as a result of the new laws and encouraging players to “aim lower”.

There is a vast and emerging body of research that augments this study but does not fit with the trendy “I care about players” narrative.

What is incredible to me is that any of this research should come as a surprise.

In my playing experience, which admittedly was almost exclusively fully amateur over some 15 seasons, I was concussed three times. Once by being punched in the head. The other two times by getting my head in the wrong position during a low tackle. I was never concussed by a high shoulder charge, swinging arm or tackle.

I felt far more vulnerable tackling than I did being tackled. I played league as an 8-12 year old and felt like I had a good technique when I started school boy rugby.

But the fact is that changes in direction and speed by runners make tackling quite a tricky past time! If I made 100 tackles, I was always going to get a handful wrong and therein lies the beauty of the game, it’s why many tries are scored.

I am certain that the majority of rugby players have similar experiences and stories.

So why this obsession with demanding tackles become lower and lower?

After all, poor old Marika who “had the option to line him up lower but didn’t” which would have increased his concussion risk by more than the risk of the ‘high’ contact to French captain, Gerard Depardieu!

For one, I think people are well intentioned but really like saying “I’m for player welfare.” The facts and the wider implications aren’t as important as the virtue signalling.

There is also an undeniable litigious aspect to all of this that has its origins in the United States.

Comparisons between NFL and rugby are misguided for too many reasons to cite in this article but they play out really well in courts with the ‘right’ experts giving evidence.

There is also an attempt to appeal to ‘soccer mums’, a demographic that probably would never have allowed their kids to play rugby anyway. 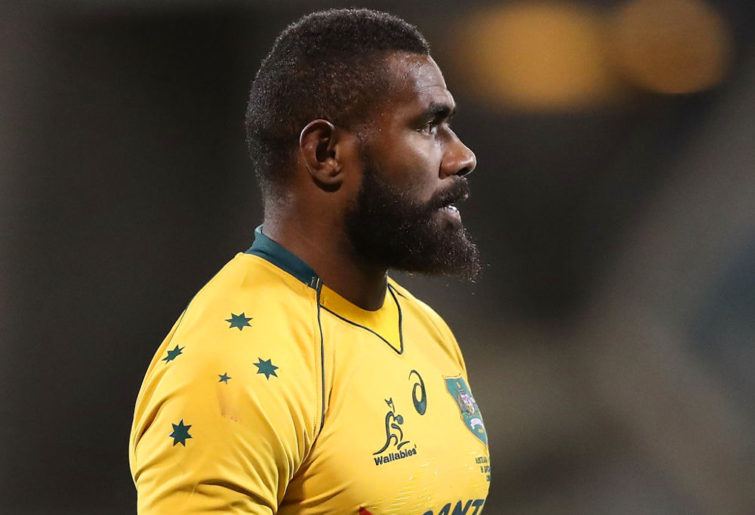 Marika Koroibete of the Wallabies (Photo by Mark Metcalfe/Getty Images)

It is this final point that the surprisingly eloquent and thoughtful Sonny Bill Williams was alluding to when he said “Very disappointing that the ref’s decision can determine the outcome of the game. We need to protect player safety, but we need to protect the game too.”

The new high contact laws have fundamentally altered the game. It is not just the inconsistent, muddled and quite frankly scared refereeing of the rules, but the rules themselves.

We want a game that is played hard in the right spirit but where foul play is stamped out.

You can’t play the game hard if players are being sent off like Koroibete was. The uncertainty and tentativeness that comes from decisions like that puts players at risk and may well be contributing to increased concussions to tacklers anyway.

You certainly can’t play the game in the right spirit when blokes like Anthony Jelonch, the French Captain no less, pull the sort of rubbish he pulled exploiting the current climate of TMO fever.

And the real foul play, the malicious stuff, becomes more and more trivial as red cards are chucked around.

It’s worth noting that this red card did not cost the Wallabies a win. However, it’s just a matter of time until a huge game is won or lost off the back of a similar call.

Forget replacing players 20 minutes after a red card. Make it harder to get a red card.

The game, especially in Australia, can’t afford to be a laughing stock.