Men’s Marathon
Sunday 8 August
Of the top hundred fastest marathons ever run, Kenyans or Ethiopians have run 88 of them. They own the top 26 fastest marathons of all time. The official world record (2:01:39) is owned by the incomparable Kenyan Eliud Kipchoge.

Ethiopians own the three next best with Kenenisa Bekele two seconds back.

Kipchoge also holds the unofficial world record (1:59:40) which was set in Vienna in October of 2019. Wearing carbon-fibre Nikes on a long straight road he was paced by a timing car with a laser pointer showing he and a 41-strong phalanx of professional runners (largely Kenyans and Ethiopians and Kangaroo Island’s own Stewart McSweyn) where to be.

The pace aces clocked in and out and formed a seven-man, V-shaped, flying wedge around their man, aerodynamic and smooth, a tight little squad of migrating geese protecting a golden one. And that’s why it’s not official. But still – quite a good run, right? Fastest a human being’s ever gone for that long, baby.

And if you can cop watching people jogging for two hours – and there’d be a way to watch long-distance running as one consumes the slow food of Test cricket (to wit with beer) – then you should catch the 36-year-old super-man, Eliud Kipchoge, while you can.

He won gold in Rio. He won the major marathon pre-Tokyo, the NN Mission Marathon, in 2:04:30. Outside of virulent sushi surprise you’d suggest he wins Tokyo, too.

Is an Aussie a show? Yeah, no. Australia has three men in the race – Liam Adams, Jack Rayner and Brett Robinson. Adams finished 31st in Rio, eight minutes behind Kipchoge. In the 2019 London marathon Robinson ran 2:10:55 to finish 13th one spot and ten seconds in front of Rayner (2:11:06). It was won by, well, you can guess.

Women’s Cycling Road Race
Sunday 25 July
Sixty-seven riders will take on the 137km course that begins in the lush forests surrounding Musashinonomori Park and ends on the finishing straight of Fuji International Speedway.

Is an Aussie a show? Good show! This year Grace Brown has won the Classic Brugge–De Panne, placed second in the Nokere Koerse and third in the Tour of Flanders.

And her team-mates Amanda Spratt, Tiffany Cromwell and Sarah Gigante will do their best to propel Brown to the podium in the shadows of Mount Fuji.

Whatever that means – and you’d suggest Roy & HG will have a crack – Biles is without question among the greatest – certainly the most decorated – gymnasts of all time. 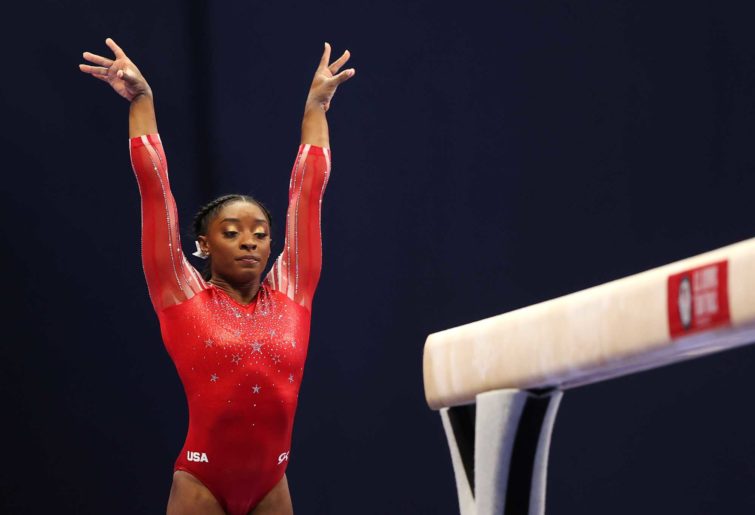 She won four gold medals and a bronze in Rio. She’s won 26 world championship medals. She’s fast and furious and 47 kilograms, and leaps around the floor like a sleek and highly-agile little horse.

Is an Aussie a show? Negative. Australia has never won a medal in artistic or rhythmic gymnastics. The best was a fifth by Lauren Mitchell on the floor in London. We are sending a record 11 gymnasts to Tokyo, however, all on debut. And good luck to them.

Athletics – Men’s 100 metres
Sunday 1 August
In the late 1500s, a group of knights who called themselves “Le Cordon Bleus” would hang their signature cross off a sash called a blue riband. A famous French cooking school would later purloin the name and invent elite cuisine.

There is a Blue Riband Trial Stakes horse race while “The Blue Riband” is an accolade given to the fastest crossing of the Atlantic Ocean by a passenger liner.

In 1964, Bill Bowerman, a track-and-field coach at the University of Oregon and his former student, Phil Knight, founded Blue Ribbon Sports. In 1972 they launched a popular shoe. In 1978 they renamed their company after the shoe. And that’s how Nike came to be.

And today the blue riband event of the Olympic Games is the one that decides the fastest human being on the planet.

In 2016 it was the giant, marvellous and super-fast Usain Bolt. And just 0.07 seconds behind him in fifth was South Africa’s Akani Simbine. Today he’s known as the “fastest ever African” and heads to Tokyo second-favourite for gold behind Trayvon Bromell of the USA.

Is an Aussie a show? Of winning? Outside of Bradbury-esque tumult, probably not. But to make the final? Perhaps. Rohan Browning is the first 100m man that Australia’s qualified for the Games since Josh Ross in 2004.

Browning’s broken ten seconds (wind-assisted) and has an official PB of 10:05 set this year. In Rio in 2016 it was the time of the last-placed runner in the final: even-money favourite for the 100m in Tokyo Mr Trayvon Bromell.

Athletics – Men’s 1500m
Saturday 7 August
The penultimate evening of the Games of the XXXII Olympiad is a Saturday Night Special. Along with the usual coterie of thin-limbed Africans led by Timothy Cheruiyot of Kenya, Mohamed Katir of Spain and Norwegian flier Jakob Ingebrigtsen are chances for the podium. This trio was 1-2-3 – and set the year’s best times – at the Wanda Diamond League meeting on 9 July.

Is an Aussie a show? You bet. Australia’s McSweyn was fourth in the above race and a serious chance of gold against the world running’s best “milers”.

McSweyn’s personal best of 3:29:51 is the 26th-fastest 1500m run of all time, the fourth-fastest in 2021 and within three-quarters of a second of the marks – all set in the same race – by our above-mentioned trio.

But hark – there cometh an Aussie…

Is an Aussie a show? Oh yes. In 2019 an 18-year-old Ariarne Titmus beat Ledecky in the 200m and 400m finals of the World Championships. Ledecky blamed a stomach bug and was clearly not her best. Some Australians made cynical allusions: Righto, Phar Lap… 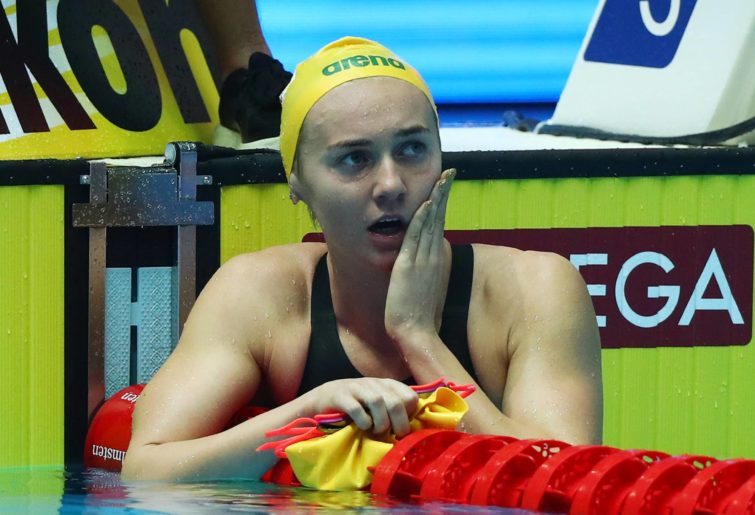 Titmus’ coach has taken to yelling “Ledecky!” as a motivation tool as she pounds out lengths above the mute black line. It appears to be working: at the Australian Olympic Trials in Adelaide Titmus swam the second-fastest 200m and 400m of all time.

Strap in, sports fans. This is about to get serious.

Swimming – Women’s 100m backstroke
Tuesday, 27 July
Three world record holders in one race? The only three women in history to get under 58 seconds? And one is an Aussie? Bring on the final of the 100m backstroke, please oh Gods of Olympus!

Is an Aussie a show? Sure is. Nineteen-year-old Kaylee McKeown is the current world record holder having set the mark in the Australian Olympic Trials in Adelaide in June. The woman whose record McKeown took (but who still owns the 200m record) Regan Smith of the USA will be in a nearby lane. And then there’s Kylie Masse of Canada, bronze medallist in Rio.

And there, sports fans, is your probable trifecta for the blue riband event of upside down backwards mad thrash and dash at the Games of the XXXII Olympiad.

They were shock fifth-place getters in Rio in 2016 (Germany, Sweden and Canada were 1-2-3) after going out in a penalty shoot-out to Sweden in the quarter finals, the first time they’d never been past the semis.

In Megan Rapinoe they have a winger who won the 2019 Ballon d’Or, was named Sports Illustrated Athlete of the Year and won the Golden Boot and Golden Ball at the 2019 World Cup. She also scored the winner in the final against the Netherlands. 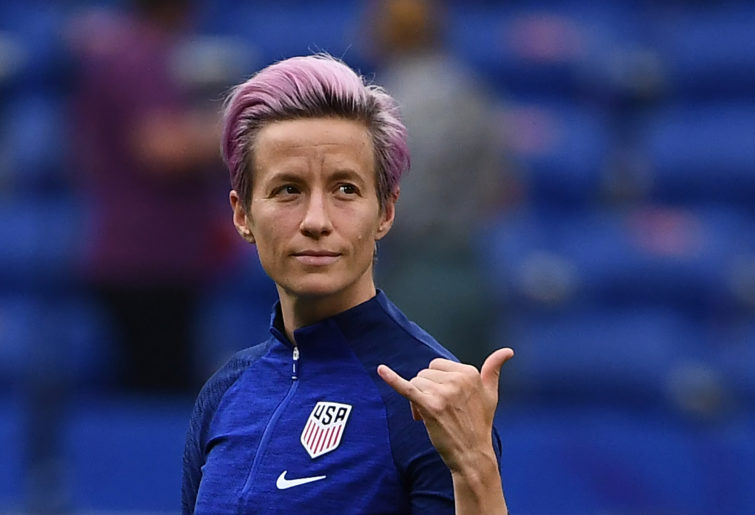 Is an Aussie a show? We’ll need luck. But Sam Kerr is 27 and nine years younger than Rapinoe. When Rapinoe scored six goals for the best team in the 2019 World Cup, Kerr scored five for the 14th-ranked Matildas. She is the first Australian to score a hat-trick at a World Cup.

She was voted Best International Women’s Soccer Player in 2018 and 2019. She was the best NWSL player in 2019 during her time with Chicago Red Stars (Rapinoe won in 2018).

Today she’s a gun player for Chelsea. And if anyone can sneak a goal or two past the United States, Sweden and New Zealand (with whom Australia share Group G) then it is Samantha May Kerr. Go her. Go team.

Men’s Basketball
Saturday 7 August
Is an Aussie a show? Probably the best chance to erase our nation’s duck egg for men’s basketball medals at the Olympics. Fresh from the momentous 91-83 toppling of the latest iteration of the United States “Dream Team” in Las Vegas, Australia’s “Boomers” head to Tokyo high on confidence despite Ben Simmons’ absence.

And if the hoops gods are kind we’ll see Australia and the USA in the final of the Tokyo Olympics basketball tournament.

Australia will need to win six games for gold in Tokyo. None of them will be against the USA in the preliminary rounds. First up is Nigeria (whom Australia slaughtered 108-69 in Vegas after resting Patty Mills, Joe Ingles, Aron Baynes and Matthew Dellavedova), followed by Belgium (ranked 37th in the world) and Italy (ranked 10th).

Go into the quarter finals unbeaten and they’ll be seeded in the top-four, and one assumes away from the United States.

The fly in the ointment between Australia and the USA in the final could be 2nd-ranked Spain. Over to you, hoop gods.

Yet the X-factor – and the man to take people’s minds off Simmons – is Matisse Thybulle, a super-competitive defensive specialist (he was named on the NBA All-Defensive Second Team) who adds attacking starch and his own three-point game.

He’s 24, he qualifies for Australia through dual citizenship (he spent seven years in Sydney as a kid) and brings a certain NBA “presence” to the middle of the Boomers’ middle. Can steal, can block, can shoot. 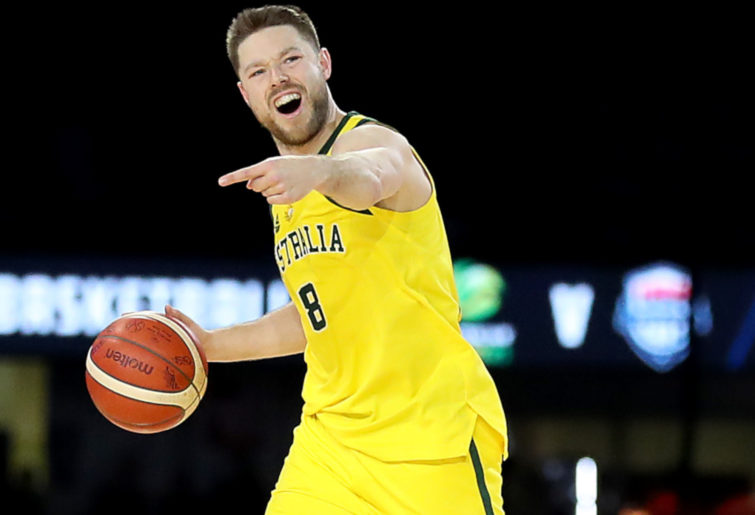 Men’s Weightlifting
Wednesday 4 August
Eastern Europeans love this stuff. Though the world record in the snatch is owned by Yang Zhe of China – who hefted a stupendous 200kg above his head in one move in April – big lifting’s biggest star is 24-year-old Armenian powerhouse Simon Martirosyan.

The two-time World Champion owns the world record for snatch and clean & jerk, lifting a combined 435kg at Ashgabat the capital city of the former Soviet-owned nation-state of Turkmenistan which sits between the Karakum Desert and the Kopet Dag mountain range in Central Asia near the Iran-Turkmenistan border.

Is an Aussie a show? Yeah, no. Not for a medal, anyway. Australia is taking five weightlifters to Tokyo, one of whom is Matthew Lydement from Brisbane’s Cougars Weightlifting Club who’s taking on the big boppers in the 109kg+ category.
Lydement has a best clean & jerk of 190kg, ten kegs less than the Chinese Hercules can haul over his head in one go. Lydement’s team-mate at the Cougars is 33-year-old Erika Yamasaki who holds 15 national records and is the only Australian woman to clean and jerk double her bodyweight.