West Indians who also played for another country

The West Indies have signalled their intentions in the lead-up to the T20 World Cup to be held later this year, with a comprehensive 4-1 victory at home against Australia.

The player of the series was leg-spinner Hayden Walsh Jr, who took 12 wickets at just 11.66 apiece. Having earlier played for the United States, Walsh is the fifth West Indian men’s international to have also played for another country. Here is a look at these players.

Sammy Guillen
Guillen played five Tests for the West Indies and three for New Zealand. Born in Port-of-Spain, the Trinidadian wicketkeeper played all five Tests on the West Indian tour of Australia in 1951-52. He then took up residence of New Zealand, and started playing for Canterbury.

He represented New Zealand against the West Indies in 1955-56. The final Test of that series, in Auckland, was also his last, and he fittingly effected the stumping that gave New Zealand their first Test win. He also played as a goalie in New Zealand’s premier football tournament.

Clayton Lambert
Born in Berbice in erstwhile British Guiana, Lambert first played for the West Indies in an ODI against England at his home ground of Bourda in 1989-90 – he scored a promising 48. The attacking left-handed batsman made his Test bow at The Oval in 1991, scoring 39 and 14.

He made a comeback after more than six years in 1997-98 against England, this time scoring 104 in a Test at St. John’s and 119 in an ODI at Port-of-Spain as opener. In 2004, he turned out for the United States at the age of 42 against New Zealand in a Champions Trophy match.

Anderson Cummins
The exclusion of Cummins, who had started off well in ODIs, was the reason for the fans’ boycott of the historic Test against South Africa in Bridgetown in 1991-92 – “No Cummins, no goings”, stated a banner. The Barbadian pacer made his Test debut the next year, at Perth.

Xavier Marshall
Having the middle name Melbourne, Marshall incidentally made his international debut in an ODI against Australia at the MCG in 2004-05. The Jamaican batsman’s best ODI innings was 157*, including a then record 12 sixes, from number four against Canada at King City in 2008.

His highest score in seven Tests was 85 against Australia at Bridgetown in 2008. He returned to international cricket in United States colours in a T20I against the UAE in 2018-19 – nearly a decade after his last game for the Windies – and has played 13 ODIs for his new team.

Hayden Walsh Jr
Walsh made his debut for the United States in 2018-19 in the same T20I that marked Marshall’s return. The leg-spinner first played first-class cricket for the Leeward Islands in 2011-12 and is the son of Antiguan Hayden Walsh Sr., who was also a first-class player.

Walsh’s only ODI for the United States was against Papua New Guinea in 2019. Less than three months after his last outing for the US, he made his ODI debut for the West Indies against Afghanistan. His recent T20I success against Australia has been his best moment until date.

Criticism is frequently made of legitimately great batsmen from time to time that the one thing lacking in his game is that he hasn’t made/doesn’t make the really big scores – or words to that effect. 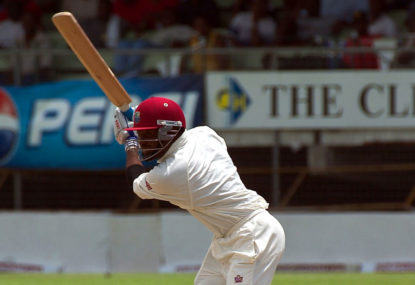 Added extras to domination comparisons: Australia and the West Indies

Here are just a few sundries to make a more complete total in the fourth and final innings of comparisons between the dominance displayed by first the West Indies, and then subsequently Australia in the 30-year period from 1978 to 2008, with some slight overlapping at both ends.

Added extras to domination comparisons: Australia and the West Indies

Having compiled an Antiguan international XI and a Guyanese Test XI, I will now attempt a Test XI with a unique twist: the inclusive Caribbean Test XI.

To say that we’re here again is something that is true. To say that I’m again unsurprised is also true.