What would the Olympics be without some salacious scandals? Half the fun of spending two weeks as a couch potato while the world’s finest athletes slug it out for sporting supremacy is guessing all the ways that things can go wrong.

From ‘Lay Down Sally’ to some questionable time-keeping, dodgy judges and incorrectly-installed equipment, here are eight of the biggest scandals from the Summer Olympics.

‘Lay Down Sally’ collects a nickname she’ll never lose
Has women’s rowing ever caused so much controversy? When the Aussie women’s eight hit the water for the final in Athens in 2004, they were expected to challenge for a medal. And given that they were in third after the first thousand metres, they still had a chance to do so. 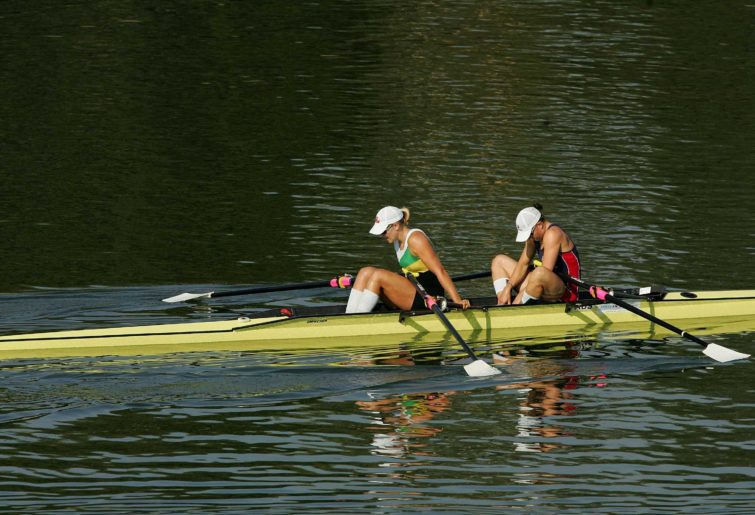 But with 500 metres of the race left to row, Sally Robbins suddenly dropped her oars and slumped backwards in her seat. She claimed she was too exhausted to continue, however her furious teammates were quick to turn on the 23-year-old after the race, with team captain Julia Wilson telling reporters: “we had nine in the boat. There was eight operating”.

Robbins never really revealed why she suddenly stopped rowing and she failed to qualify for the Beijing Games. Now a yoga instructor, she’s been dogged by the ‘Lay Down Sally’ nickname ever since.

Ben Johnson thrills the world for all of two days
“The gold medal for the 100-metres is mine,” said legendary American sprinter Carl Lewis in the build-up to one of the most heavily anticipated Olympics races in history. “I will never again lose to (Ben) Johnson”.

Unfortunately for Lewis he did indeed lose to Johnson in the 100-metre race at the 1988 Olympics in Seoul. After the Canadian streaked home in a world record time of 9.79 seconds, the world thought it had just witnessed the beginning of a new era in athletics. Instead what it had witnessed was the end of Johnson’s racing career.

Two days after Johnson had beaten Lewis into second, a drug test revealed the Canadian had been using anabolic steroids.

He later claimed that most of the world’s top athletes were using performance-enhancing drugs and he was merely levelling the playing field. 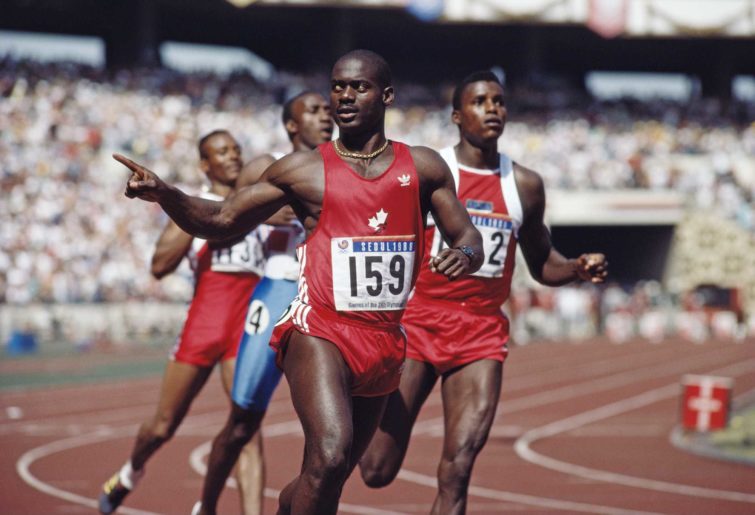 Shin A-lam gets shafted by some dodgy timekeeping
Few could have predicted the noble sport of fencing to produce one of the most controversial moments in Olympics history, but that was before South Korean fencer Shin A-lam lost her semi-final at the 2012 London Games in the most unimaginable way possible.

Locked at 5-5 in sudden death extra-time with defending champion Britta Heidemann of Germany, Shin looked to have won the bout as the official clock ticked down to less than a second remaining. Having been randomly assigned ‘priority’ in extra-time – which meant that in the event of a tie, Shin would be declared the winner – all the South Korean had to do was survive the remaining second.

But with the fencing clock only counting down in full increments of a second and with Shin having already resisted three Heidemann attacks, the referee asked the timekeeper to check how much time was left. Sadly for Shin the timekeeper misinterpreted the instruction and restarted the clock, which immediately struck zero.

Shin thought she had won but as the bout hadn’t officially restarted, the referee ordered the clock to be restarted. With one second being the lowest increment that could be added to the clock, it gave Heidemann enough time to launch one last attack and, you guessed it, incredibly win the bout.

A distraught Shin then had to wait on the piste for over an hour while officials debated the legality of Heidemann’s victory. The image of her weeping uncontrollably in front of a stunned arena became one of the defining moments of the London Games.

Regarded as one of the greatest pound for pound boxers in history, Jones Jr utterly pulverised his opponents in cruising to the light middleweight final at the 1988 Olympics. And the American was in no mood to show local favourite Park Si-Hun much mercy as he rained down 86 punches to Park’s 32 in the one-sided three-round bout in Seoul.

Despite clearly winning the fight, Jones Jr was as stunned as the rest of the world to hear Park’s name called as the winner. It turns out that South Korean officials had reportedly wined and dined the judges before the boxing competition commenced, with one official later admitting he’d voted for Park simply to please the hometown crowd.

Two of the three voting judges were later banned for life, while the International Olympic Committee went so far as to change the way boxing was officially scored.

And while Jones Jr would finish with a record of 66 wins and just nine defeats from his professional career, there’s no doubt that an Olympic gold medal was the one that scandalously got away.

Officials in Sydney forget to pack the tape measure
“Does the vault look too low to you?” enquired 16-year-old Allana Slater after several of her fellow competitors had taken uncharacteristic spills on the vault in the women’s artistic gymnastics final at the 2000 Sydney Olympics.

Half the competitors had already vaulted, with fiery Russian favourite Svetlana Khorkina practically landing on her knees, while Great Britain’s Annika Reeder missed her vault altogether. It was only when Slater stood next to the vault to show her personal coach how low it was in relation to her slender frame that officials realised they had a serious problem.

It turned out the vault had been set five centimetres too low, ensuring several competitors mistimed their leaps and failed to stick their landings. Those impacted were offered the chance to vault again, but an incensed Khorkina refused and ultimately finished tenth in the individual all-around rankings.

Slater finished 16th overall, but she’s mostly remembered as the sharp-eyed teenager who noticed the vault in an Olympics final had inexplicably been set at the incorrect height.

Ryan Lochte does his bit for Rio tourism
Although Brazil hosted a largely trouble-free FIFA World Cup in 2014, there were still concerns in some quarters that street crime would be a factor when Rio de Janeiro hosted the 2016 Olympics.

Unfortunately American swimmer Ryan Lochte and three of his swim teammates played up to those stereotypes after a drunken night out ended in ‘Lochtegate’.

After Lochte and fellow American swimmers Jimmy Feigen, Gunnar Bentz and Jack Conger claimed they had been robbed at gunpoint, an Olympics spokesman apologised for the violence.

But cracks began to emerge in their story when police began to investigate, with Lochte later admitting that he was drunk during the incident and “over-exaggerated” what had happened. He also admitted that it was “a lie” the group had been held up at gunpoint.

What did actually happen remains a matter of conjecture, with Lochte and his teammates believing they were being robbed after stopping to use a bathroom at a Shell petrol station and finding it locked. But the fallout from the incident was huge.

After leaving Brazil in disgrace, the four swimmers were banned for several months by US Swimming, while Lochte was dropped by all four of his major sponsors and eventually had to sell his house.

North Koreans walk off in protest at flag ‘nonsense’
If you’re ever going to mix up the flags of two different countries, you probably don’t want it to involve the Democratic People’s Republic of Korea. Better known as North Korea, the secretive hermit state has technically been at war with southern neighbours South Korea since the Korean War ended in stalemate in 1953.

So when the North Korean women’s team walked out at a sparsely-attended Hampden Park on the first day of the London Olympics in 2012, the reaction to seeing their faces plastered next to South Korean flags on the video screens in Glasgow was entirely predictable.

The North Koreans promptly walked off, with team officials stating that it was “nonsense” to kick off the game in such circumstances.

It took more than an hour to get the North Koreans back on the pitch, with striker Kim Song-hui bagging a brace in the 2-0 win over Colombia. Subsequent defeats to France and the United States sent them packing, but not before they’d reminded graphic design departments everywhere to always double-check they’re using the correct national flag.

Marion Jones goes from the penthouse to the jailhouse
“I never thought that I needed to use performance-enhancing drugs to make me better,” said American athlete Marion Jones in a televised interview with Oprah Winfrey in 2008. The problem for Jones was that she had actually been doping for almost her entire career. 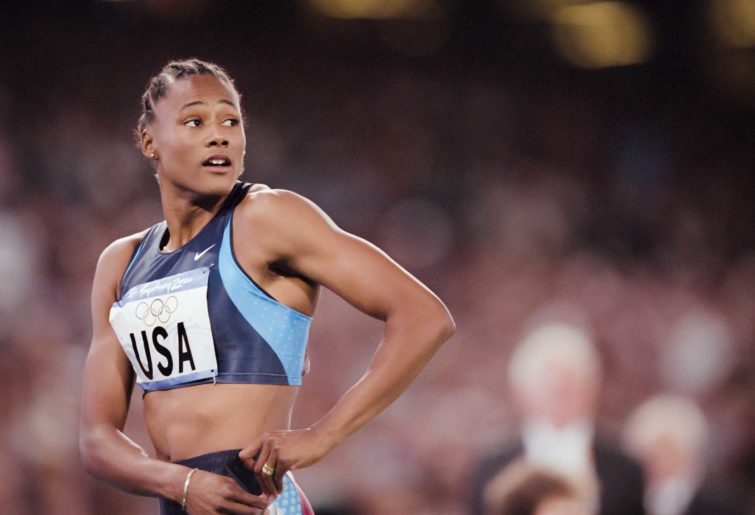 Marion Jones of the USA (Photo by David Madison/Getty Images)

Jones arrived at the 2000 Olympics in Sydney as one of the highest-profile athletes in the Games. She’d already declared that she would win five gold medals in her five chosen events and it looked like she would make good on her word after winning both the 100-metre and 200-metre races, as well as the four x 400-metre relay.

And while Jones would also win bronze in the long jump and four x 100-metre relay, her links to disgraced shot-putter C. J. Hunter, who was also her husband and coach, meant Jones had long been dogged by rumours of doping.

The jig was up in 2004 when the head of a widespread doping ring admitted to personally administering steroids to Jones. Having previously lied under oath about the use of performance-enhancing drugs, a cash-strapped Jones was eventually sentenced to six months in prison for perjury and her role in a cheque counterfeiting scheme.

She was officially stripped of all five of her medals from the Sydney Olympics in December 2007.