We don't need to see what happens in the dressing room

We find ourselves in a time where everything is out in the open for everyone to see.

Anything we want to know is just a click, swipe, or button press away.

The NRL have most certainly become part of that era.

We are always wanting to know the latest news on the game. Or any information from our team. Or what kind of TikTok dance Nathan Cleary is doing today.

And it seems that the NRL and everyone on the payroll have accepted that this, and they are giving the fans what they want.

Cheeky player interviews after a match. Press conferences with angry coaches getting fined for speaking the truth. Live crosses from lounge rooms during NRL 360 and 100% Footy. Instagram videos of Brandon Smith filling up Craig Bellamy’s bag full of rocks.

And as fans, we just lap it up.

From the footy side of things, it makes us feel like we are part of our team. Hearing the game plan, seeing how training has been going, finding out any news and whispers – we are right there with them.

I personally think this is great. This is what the fans want to see. Making us feel a part of the NRL world.

The one ‘access all areas’ section that I still can’t get on board with, though, is the dressing room.

This should be a place just for the teams. For the coach to get angry and drop as many colourful words as he wants. For the players to walk around in their undies and do their stretches. To drink their post-match beers. To scoff their post-match pizza.

To celebrate and bang out the team song. To commiserate and dissect what went wrong.

I have felt this way about the dressing room for a while. But after cameras in the North Queensland Cowboys dressing room caught – and stayed on – Francis Molo trying to comfort an inconsolable Tom Gilbert after their loss to the Roosters, I thought enough is enough.

As much as it would have been classed as ‘good viewing’ or ‘must-see TV’ from the powers that be – it really wasn’t. Gilbert didn’t need his raw emotions – that he thought he was producing in private – broadcast to everyone and then later shared on social media.

It was hard to watch. And unnecessary. 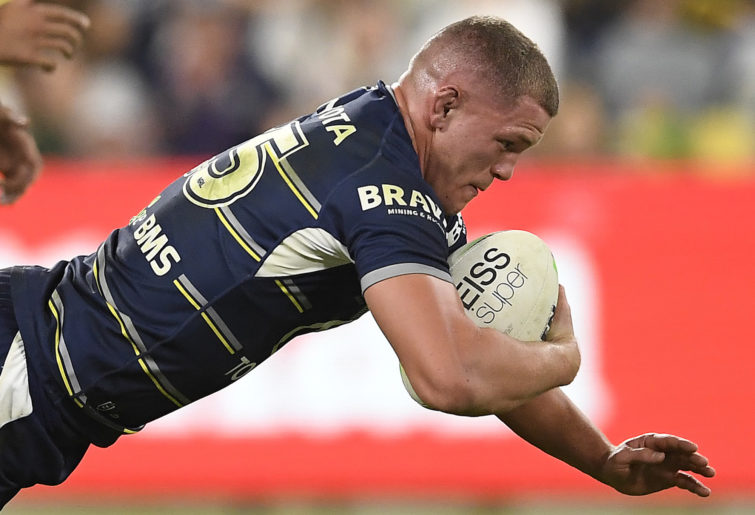 I know some fans have said that it was good to see him so upset, to show how much the loss meant to him and how much he wanted to win.

I get that, to a certain degree. But this is where the coach can come out and say in his press conference that ‘the boys are shattered, we even have some in tears they are that heart-broken’.

Or the captain can say ‘we have all taken this one very hard, a lot of emotion is spilling out in the dressing room’.

Special behind-the-scenes access like the Wests Tigers documentary is always a real eye opener for fans and great viewing. But it’s been signed off on and given approval by the team. Cameras in a normal dressing room for any given game is not the same.

If a player cries tears of joy or breaks down in a pool of misery on the field, they know they are on camera and they are surrounded by a crowd of journalists, commentators and fans. Everything they do out there is being watched, filmed and shared. It’s out in public.

When an interview is being held, or a personal post is put up on social media, the player or coach has control of what they want to say, and what they want everyone to see and hear.

When news is published about a player in trouble or a team in crisis, well that’s too bad. That’s part of the job.

Journalists out the front of NRL headquarters, judiciary hearings, club car parks, players houses – it’s a lot but it’s all part of it.

We can wish players happy birthday, tag them in our photos, congratulate them on the birth of a child, and give them our honest reviews of how we thought they played on the weekend on their social media.

We watch coaches explode in the coach’s box. Hear captains give their team an absolute spray in a huddle. Lip read players frustration when they knock on.

We saw Shaun Johnson’s raw emotion after being told live on air about having to relocate to Queensland. We have seen Nathan Hindmarsh’s butt crack way too many times when he would lose his pants in a tackle.

And we have witnessed enough snot to last a lifetime when the camera zooms in on players clearing their nose.

But the dressing room? This needs to be off limits. The players still need some form of privacy. Let them have one piece of sanctuary.

When a team is trying to get ready for battle, partying after a win or licking their wounds after a loss – we don’t need to see it.

When a player has just been told the bad prognosis of an injury – we don’t need to see it.

When a coach is giving his final word, halftime spray or post-match analysis – we don’t need to see it.

When a player breaks down in tears of absolute despair after a loss and a teammate is trying to console him in private – we don’t need to see it.

We think we do. We have been programmed to believe we do. But we really don’t.