All 11,500 athletes in Tokyo should be taking a knee

Considering the events of recent weeks and the continuing inability of many around the globe to see past their own prejudice and discrimination, each and every athlete at the Tokyo Olympics should be taking a knee in the moments before they compete.

I can hear those infuriated by such a view whinging and whining as I type these words.

“All lives matter” they will say, “it’s a political movement” they will chant in narrow-minded unison.

In reality, the defiance of many sports fans around the world and their refusal to take a unified and collective stance against bigotry, division and racism, continues to do little more than elongate the journey towards a place of acceptance and equality.

Those against seeing athletes make a clear and definitive metaphorical statement that demands we do more to eliminate hatred and Neanderthal views in both our social and cultural spaces, may find the gesture tokenistic and merely symbolic.

In a forlorn reality, they may have a point, especially considering the seemingly limited effectiveness the actions of many sportspeople across the globe appear to have had over the last 12 months.

However, the sceptics of taking a knee seem to offer little as an alternative and despite an inherent myth that such appalling views will evaporate naturally as humanity evolves, matures and becomes necessarily more global, there is little or no evidence to validate such an argument.

In essence, if we do nothing to combat discrimination, racism and intolerance, there is destined to be no change in the actions of those who live in a world of unintelligent and nurtured hatred.

Such has been evident over the last fortnight, with English football fans lowering themselves to a point of no return in their treatment of a trio of young black footballers who wear the badge of the Three Lions with honour and pride. 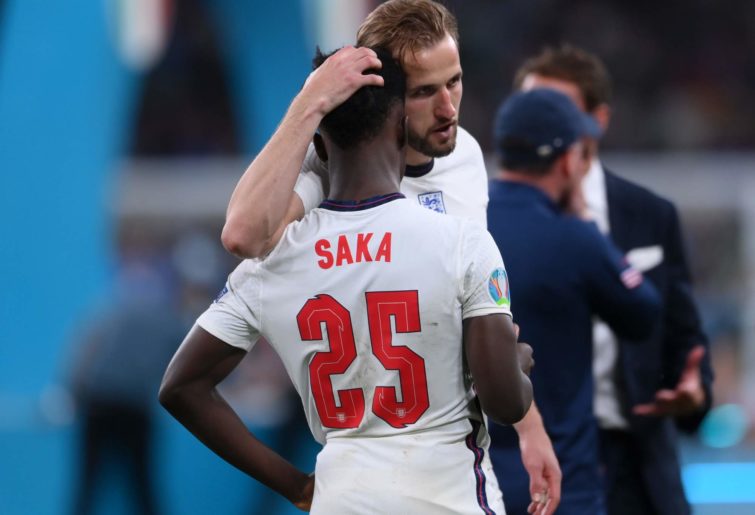 What transpired after the Euro 2020 final, both at the stadium and online, represented all that is bad about England, its football supporters and the deeply ingrained notions of white supremacy that obviously still permeate through a significant portion of English society.

After an English Premier League season where players took a knee and a quiet moment of hope and prayer prior to kick-off in each match, it only took a heartbreaking loss to Italy at Wembley for any lasting impact of such gestures to be obliterated and minority communities to be reminded once again of just how far down the pecking order they sit according to a significant portion of fans.

Over many years we have seen and heard of the horrendous abuse thrown towards black players in many European football leagues, as well as seen the United States disgrace itself as more and more black athletes shed light on their experiences.

And Australia bears no right to deny its own flaws, with rugby league and Australian rules players opening up on theirs.

The weekend just passed saw seven-time Formula One champion Lewis Hamilton experience similar vitriol after diving down the inside of Max Verstappen’s Red Bull in the British Grand Prix at Silverstone.

At one of the fastest corners on the F1 circuit, Hamilton had no business pursuing his pass attempt when the Dutchman lurched well ahead at the apex. Sadly, he did, despite Verstappen’s efforts to steer his car left to avoid the collision.

Hamilton rightfully copped a ten-second penalty, yet that was infinitesimal compared to the abuse he received in the hours that followed.

Racial insults, offensive emojis and venomous language flowed, much of which was eventually removed from social media platforms, all while the bigger story was Verstappen’s subsequent trip to hospital after an alarming high-speed crash.

Hamilton has been a stoic advocate of the Black Lives Matter movement, recently initiating a report to investigate the lack of diversity in his sport and potential ways to change its face in the coming years.

It appears no matter how successful he, nor other brilliantly skilled black athletes around the globe may be, in the moments when execution fails them, the cowardice of racism rears its head with such a nasty force that the rest of us melt in shame and embarrassment.

Sadly, in spite of all the effort and advocacy, the two most recent examples of vicious racism in world sport suggest there is little hope.

However, as a singular human race there must be.

In Tokyo, after 18 months of pandemic fear, a period that potentially provides the vehicle for an historical coming together and the opportunity for change on a global scale, every athlete must take a knee.

They should do it for their opponents, their teammates and their fiercest of rivals. They should it for young English footballers and a Formula One driver destined to become a legend of the sport.

But most of all, they should do it for themselves.

The only path to change is through individual accountability and a realisation that depending on where we were born and to whom, the colour of our skin and/or the shape of our eyes, each and every one of our lives could be very different.