North Queensland star Hamiso Tabuai-Fidow could miss the rest of the NRL season after undergoing emergency surgery in Townsville on Wednesday.

The Queensland Origin winger was rushed in for an appendectomy and will spend at least one night in hospital before he’s released to recover.

He’s expected to miss up to six weeks, meaning the 13th-placed Cowboys would need to make the finals for him to play again this season unless he is cleared to return in the final round against Manly. 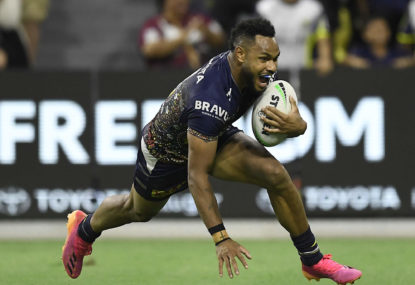 The club has yet to name the 19-year-old’s replacement at fullback for Friday’s clash with Melbourne.

It comes as a blow for North Queensland with Valentine Holmes also sidelined for up to a month with a shoulder injury he suffered in State of Origin III last week.

Tabuai-Fidow had slotted in at fullback as Holmes’ replacement against the Sydney Roosters last week with a remarkable 253 metres, eight tackle breaks and a try.

The Cowboys are just two points out of the top eight and will face in-form sides the Storm, Parramatta and Sea Eagles in their last seven games of the year.