In the end, the Wallabies got the job done the hard way.

They played the final Test of a compelling series against France with 14 men for all but four-and-a-half minutes of the game, and the man missing was their outstanding back Marika Koroibete.

It was rugby’s equivalent of entering the ring for a prize-fight with one arm tied behind your back.

Koroibete received his marching orders for a head-high challenge on the French captain Antony Jelonch after a kick-off receipt. Dave Rennie was filthy about the incident at the post-match press conference:

“It [the red card] was terribly milked, wasn’t it? He obviously feels he got some head contact and he’s grabbed his face, which was nowhere near the point of impact and was delayed by five seconds.

“Tate McDermott, in an attempt to stop a try, got a forearm in the throat. It’s a penalty, red card and disallowed try, but he doesn’t lie on the ground and milk it…

“Every time there was anything like a head shot, these guys had been shot by a sniper. So, I find it disappointing.”

The Wallabies’ head coach was on fairly solid ground in the case for mitigating circumstances. Jelonch did appear to lean in and down in preparation for the moment of contact. 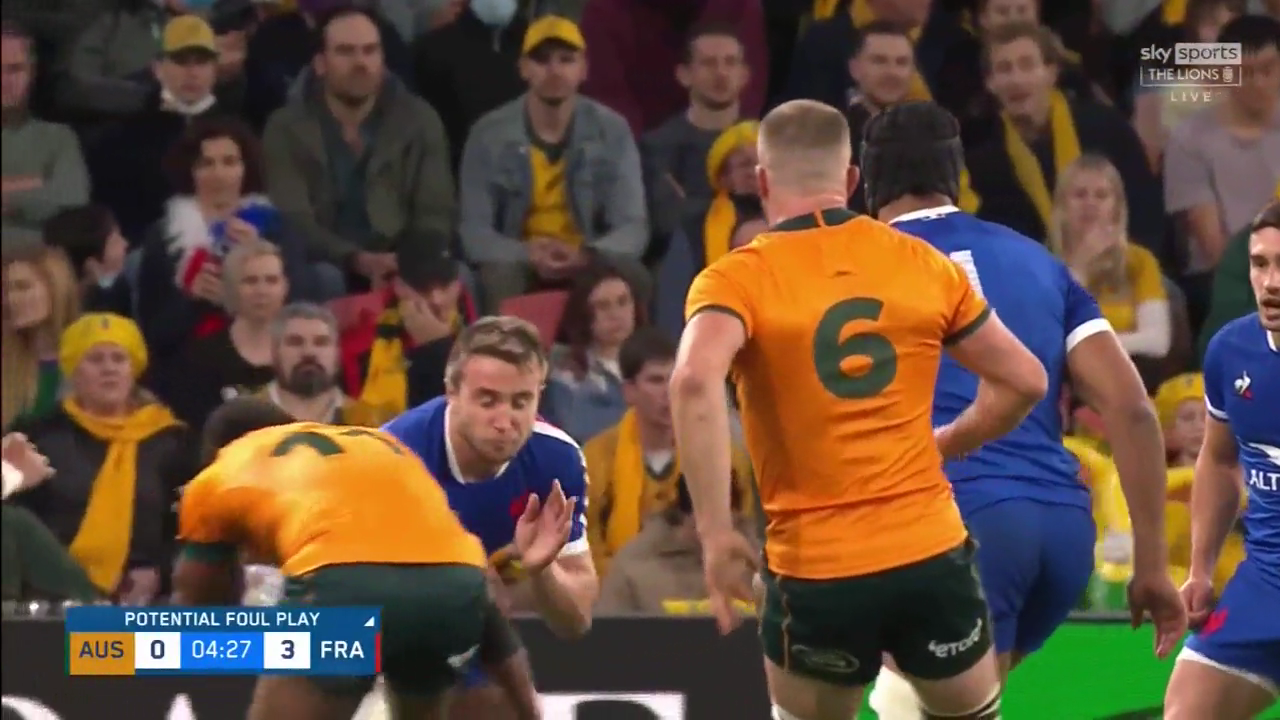 A yellow card? Maybe. An orange? Probably. The rule change for a 30-minute red card for foul play, with allowance for a replacement at the end of the penalty period, cannot come quickly enough at Test level.

In the enforced absence of Koroibete, the Wallabies got the job done the old-fashioned way. They were finally able to exploit the relative French weakness at set-piece which I noted before the tour ever got underway, winning five penalties at the scrum, and turning over three early lineouts.

“We were able to put their set-piece under pressure, and [debutant starter] Darcy [Swain] was a big part of that. It is the reason we picked him,” Rennie said.

Except for Romain Taofifenua, there are no ‘Monsters of the Midway’ roaming the deep, dark oceans of Les Bleus’ tight five any more. The days of Gérard Cholley, Alain Estève. Jean-Pierre Garuet and Michel Palmié are long gone.

Their descendants in the professional era are picked more for more all-round ability than the fear they strike into opposition hearts at scrum and lineout. It would have been no different, had first choices like Cyrille Baille, Julien Marchand and ‘Momo’ Haouas been available to tour.

If the set-piece gave the Wallabies a foothold in the game one man down, it was a monumental performance by their captain Michael Hooper which ensured the absence of Koroibete was not too keenly felt. Hooper was everywhere in defence and attack, with a thumb in the dyke of every hole which appeared, or looked likely to appear in the course of the game.

On attack, he ran for as many metres as Australia’s top forward ball-carrier (number 8 Isi Naisarani) on half the number of runs, and was the only Wallaby starting forward on the day to beat defenders (three), make try-assists (two), clean breaks (one) and offloads (one).

On defence, he made more on-ball attempts at the tackle area than the rest of the forward pack put together.

Michael Hooper even showed some signs of improvement as a captain, on the occasion of equalling John Eales’ record of leading his country into battle 55 times.

He started with a testy and protracted exchange with Ben O’Keeffe after Koroibete’s sending off, which threatened to sully the waters for the rest of the game:

“I thought it was a great shot. So, I was seeing something a bit different to the referee. Probably why it extended a bit was because if a player goes down holding his face, he has to go off for an HIA, which is what inevitably happens. So that is why the conversation [with the referee] extended a bit.”

If this was Hooper at his most argumentative, he showed the presence of mind to save the situation in his next conversation with O’Keeffe, after a high tackle by Jelonch on Len Ikitau was shown on the big screen and not carded, creating uproar in the crowd.

Instead of arguing and blowing the referee off as he might have done previously, Hooper takes a step back and leavens the situation with a bit of humour. A relaxed referee is much more likely to take a friendly word of advice from a team captain in the future, and the body language between the two men remained positive.

That represented an important step forward.

On defence, Hooper found himself filling in for Marika Koroibete both directly, and indirectly.

With Koroibete off the field, the fullback Tom Banks has come across to fill in for him on the left wing behind the lineout, but the threat posed by French scrumhalf Baptiste Couilloud, hidden at the tail of the line, has passed unnoticed. 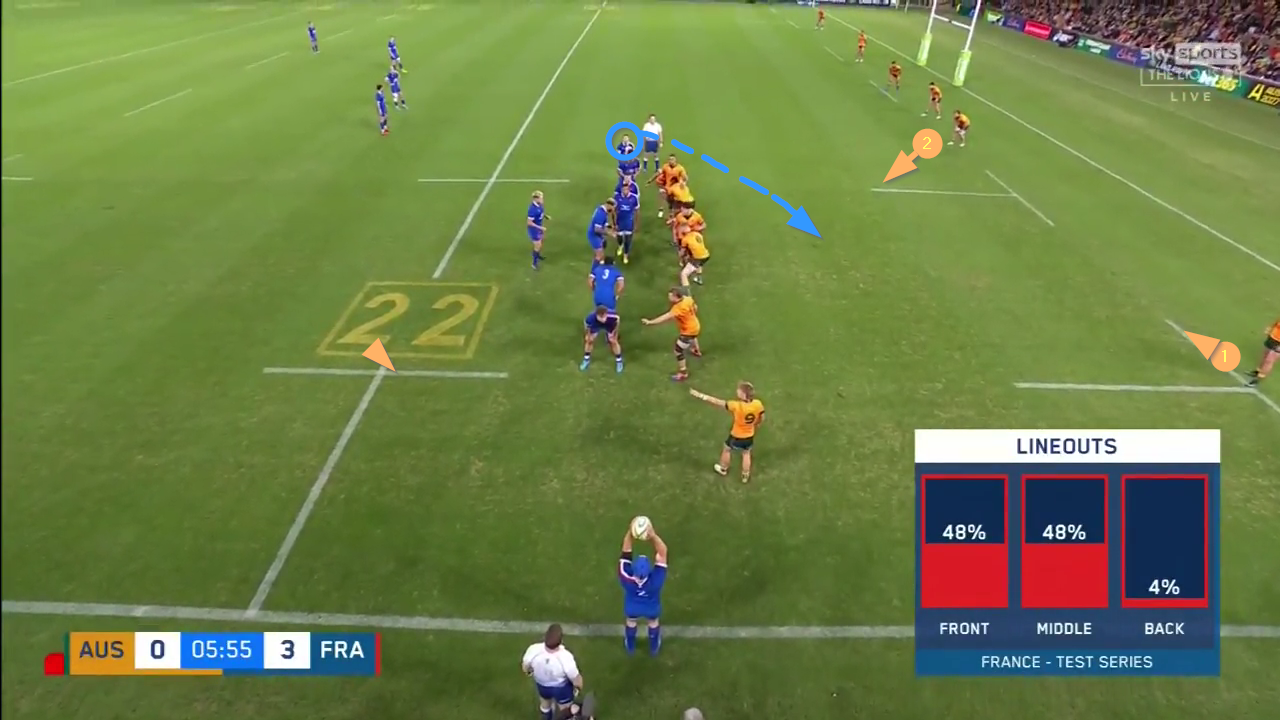 It is left to Hooper to cover across from his spot inside Noah Lolesio and make the essential tackle and sacrifice (three points for five, or seven) at the next goal-line ruck.

It was not the only time the Wallaby captain had to go back and clear up a mess not of his own making, with dustpan and brush in hand.

Australia do not trust the natural option, a box kick exit from Tate McDermott. The ball gets shoveled back to Lolesio, in a more awkward position for the kick. Hooper has to retreat from the short-side kick-chase and make his second important save of the game.

The sojourn in Japan looks to have recharged Hooper’s batteries, and he was strong in defensive contact scenarios throughout.

In both instances, Hooper is an essential link in the Wallaby kick-chase, as the openside prong leading up the line in the first example, and linking with the outside backs in the second.

The new directives at the tackle zone, which require the first arriving defender to show a clear lift of the ball, but not to ‘survive the cleanout’, have clearly benefited the premier number 7 in Australia.

Hooper’s influence was even more emphatic in the big moments on attack.

Here is the ideal outcome for the Wallabies’ attacking shape, with the ball played out of the first pod of forwards by Swain, and Hooper the wider man of the ‘2’ in midfield outside them. 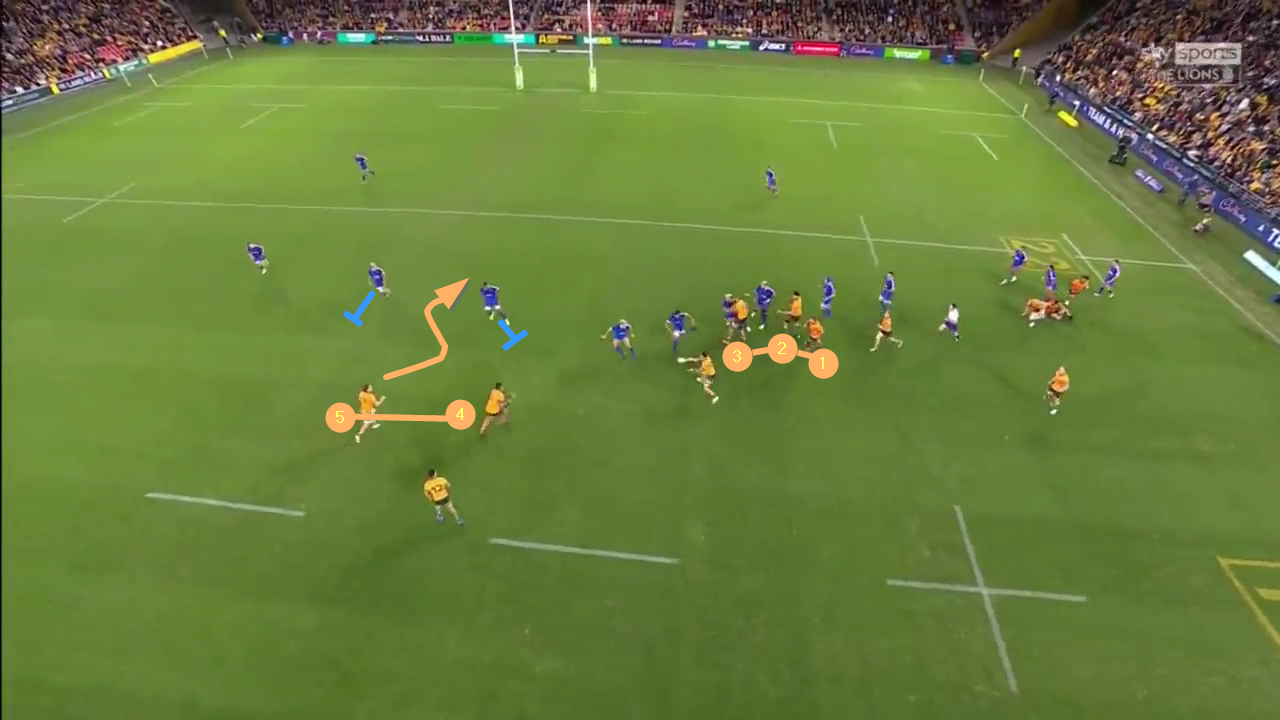 It was one of the few mistakes that Hooper’s outstanding opposite number, Cameron Woki, made in the course of the series, but Hooper’s break-and-offload to McDermott is out of the top drawer.

It was not the only example of a growing understanding between the Wallaby number 7 and number 9 over the course of the game.

Hooper flips the ball to Lachie Swinton, and he opens up the channel through the middle of the ruck to return the favour. Who is the player attending the ruck as the half-back at the end of the play? That’s right, it’s the ubiquitous Australian captain.

This desire to play in the centre of physical storm, deep within the opposition 22, may come as news to those who only ever see the hair-tousle, and the ‘seagull’ well away from the core physical grind.

It’s a smart move by Hooper, drawing in the two French defenders closest to the ruck before popping the ball back to Brandon Paenga-Amosa like a chicken, laying the golden egg.

Dave Rennie will undoubtedly have taken reassurance from the 2-1 series win over France – as much through the manner of victory as the result itself.

“It showed a huge amount of character to lose Filipo (Daugunu) in the first phase and then Marika a handful of minutes late,” the coach said.

“We’re incredibly proud of the boys and I think it will be huge for this group.”

The achievement of victory in adversity will stand the squad in good stead for the much stiffer tests to come against the All Blacks in the Bledisloe Cup and in the Rugby Championship, with Pumas and Springboks added to the mix.

In the process, Rennie has also unearthed some intriguing options in his back row. The heavier physical presence of Isi Naisarani at number 8 and Lachie Swinton at number 6 dovetailed better with a close-breaking half-back in Tate McDermott, than the previous combination of Harry Wilson and Rob Valetini had done with Jake Gordon over the first two Tests.

Those two also played a significant complementary role to Michael Hooper at number 7. The play at lineout and on the carry was sharper and more definite with Naisarani and Swinton in harness, and Hooper was freer to juggle all of the many roles at which he excels.

In the event, he didn’t drop a ball, either literally or figuratively. He showed signs of a new composure dealing with referee when things didn’t go his way; he made line-breaks and try-assists on attack, and turnovers and try-savers on defence.

Amid all of the calls for change in Australia’s gathering rugby darkness, he remains the one player the Wallabies cannot do without.