Canberra coach Ricky Stuart is hopeful Jack Wighton will miss just one game with a rib injury but will leave that call up to the NSW Origin half next week.

The Raiders will be without the Dally M Medallist in Thursday night’s crucial match with Parramatta, as well as Elliott Whitehead (shoulder) and Xavier Savage (shoulder).

Teammates are rallying around 19-year-old Savage after he flew back to Canberra on Wednesday to undergo surgery on his injured AC joint.

The teenager has been a bright spot for the Raiders in recent weeks and news that he will miss the rest of the season came as a big blow to the side.

However, the word that Wighton could return in time to face Newcastle in Round 20 will ease concerns.

“We’ll monitor him, but it’ll be up to Jack,” Stuart said ahead of the Eels’ clash.

“Fingers cross it’ll be a week, we’ll do what we have to do. 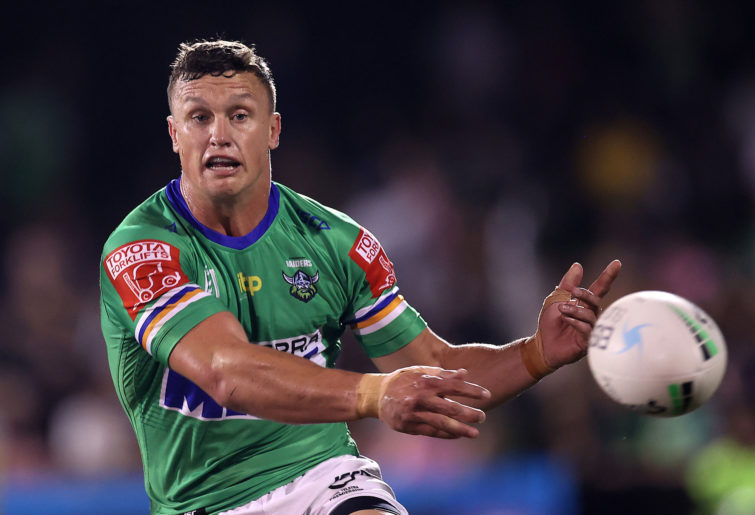 “Matty Frawley filled in there against Manly so we’re very fortunate to have experienced cover there.

“Hopefully only a week, but we’ll give Jack the right of say there in regards to when he’s going to be fit.”

Stuart said medical advice suggested Savage would need surgery immediately on his injured shoulder given he’s only 19 and still developing.

“It was important for his age to get the surgery done in the first week, that was the medical advice,” Stuart said.

“I didn’t want to risk him being such a young man.

“We wanted to get him into recovery and rehab as soon as we could.”

The Raiders are just outside the top eight with just seven wins for the season and are desperate to pull it together despite injuries to make finals.

“It hasn’t just been this year, this spate of injuries,” Stuart said.

“It’s been back to back and that knocks you around and tests your resilience as a squad.

“The one thing you can’t control is injuries but you can control effort.

“We certainly bring plenty of effort and we’re ready to play.”