You’re expecting a rant, I know.

When the news broke that Australia and New Zealand had withdrawn from the World Cup, Rugby Football League chair Simon Johnson went on the BBC and called the decision “selfish, parochial and cowardly”.

My colleague, journalist Tony Hannan, recounted how the 1946 Great Britain Lions Indominables braved a long voyage through mine-infested waters to help get the Australian game started again after the war. He said the 2021 Australians and New Zealanders would go down as the “chickenshits”.

But I want to come at this from a different angle.

Within an hour of Australia and New Zealand pulling out of the Rugby League World Cup, Cricket Australia confirmed a tour of Bangladesh was going ahead.

The Wallabies and All Blacks will be here at the same time as the World Cup. The New Zealand women’s cricketers will be in the UK in September. There’s an Olympics on now.

You can only draw one conclusion: rugby league is just not an international sport. It’s not.

It can’t meet its commitments, it can’t stage like-for-like events to compete with its rivals in the marketplace. I could say it was “a joke” but not many people are even talking about it outside of its own community.

I mean, rugby union people – they’ve been laughing for 126 years, the way money-grubbing, narrow-minded, stay-at-home Mungos shoot themselves in the foot every time they come up with a decent idea.

For sure, it must be bloody hilarious to them. Did you say ‘Wolfpack”? Hahaha.

Rugby league is not an international sport because of the money, power, industrial relations situation, geography and general attitude of the NRL, right? No matter what you think of the rights and wrongs of this particular decision, it is a clear example of the sport not being capable of doing what other sports do.

OK, once we establish that, we have to ask ourselves: how do we make it an international sport?

The IRL thought it could make headway by giving the ARLC a couple of places on its board and appointing the former deputy premier of NSW as its chair. Pretty big move; hasn’t worked. He is today, in his own words, “picking up the pieces of International Rugby League’s tarnished reputation”.

Postponing the World Cup just kicks the can with “dysfunction” on it further down the road. Remember the Denver Test? Undermined by NRL before it was played and when the players insisted on going, the clus retaliated by completely killing the mid-season international window.

How long must this “consultation” and “partnership” with the NRL continue?

To me, if the NRL and its clubs are removed from the equation then the dysfunctional becomes functional. The obstacle is finally gone. There are sports at the current Olympics with no professional component at all. They get their government funding, they’re recognised by the IOC and GAISF and they get by.

International Rugby League (not yet recognised as a sport, by the way) should learn from these sports, in my view. Yes, big events involving the big three are the only way they can make money.

So they’re going to have to live on less money and cut their cloth like handball or synchronised swimming.

It’s no secret the IRL has been talking to possible Private Equity partners. That needs to become a priority.

There are Nines tournaments every weekend now, usually multiple events at the same time. Take over that sector before it becomes too big, like sevens did.

Brand it, stream it and aim for a small circuit with national teams featuring non-NRL players by year three or four.

And legally protect your right to grant Test status to matches. The IRL went to the International Court of Sports Arbitration to fight for its right to recognise a different body in Tonga. It needs to take similar measures to stop the NRL setting up alternative Tonga, Samoa and Fiji teams and calling its trans-Tasman games “Tests”. 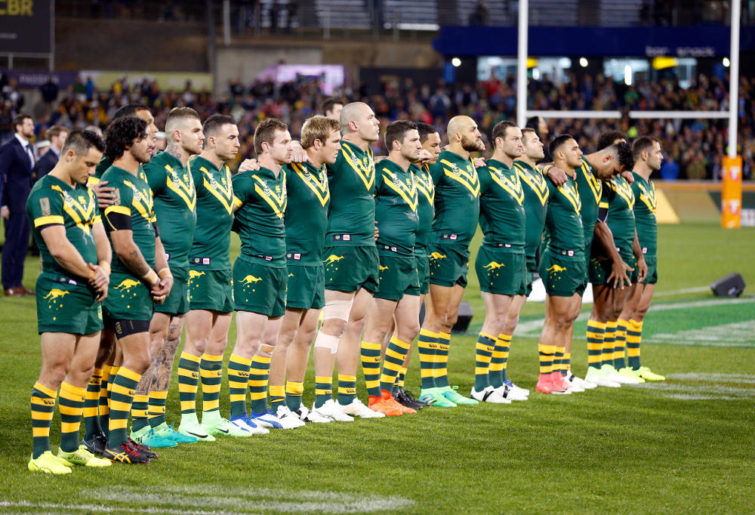 The Australia Kangaroos line up at the 2017 Anzac Test (Image: NRL)

Only the IRL decides what is an international and what isn’t. Everything else is an All Star game.

Finally, announce a calendar for international tournaments that is reasonable, that gives pro players every chance to show up, and negotiate directly with the players.

You know, the decision to proceed with RLWC 2021 was taken after a huge number of players were surveyed and said they wanted it to proceed. It was ‘on’ because players told the organisers they wanted it on.

And the players have been saying that publicly in recent days, no doubt making the clubs tetchy and forcing the hand of the ARLC and the NZRL.

But after you have announced the matches and told the NRL players, don’t expect them to show up. That’s the key.

Don’t rely on them. International Rugby League should, in my opinion, now pivot to being the organiser of matches for amateur and semi-professional athletes, start again and build up from scratch.

Once it makes that decision, the call on whether this year’s Rugby League World Cup should proceed will be an easy one. All those games on the BBC and £25 million in government funding is a mighty springboard for a part-time and amateur sport.