The win lifts the Crows (6-12) to 15th on the ladder and moves them six points clear of the wooden spoon.

But the 17th-placed Hawks (4-13-1) are now only two premiership points clear of last-placed North Melbourne with four rounds to go.

Tom Mitchell, James Worpel and Lachlan Bramble were the best for the Hawks, while Mitchell Lewis kicked three goals.

The Crows led by 12 points at three-quarter time before Hawks goals to youngster Tyler Brockman and captain Ben McEvoy narrowed the margin to one point.

Laird was unstoppable with his work across the ground, turning in a clear best on field performance with his ball-winning ability and work out of stoppages.

The Crows lost their home ground advantage when they flew to Victoria on Tuesday in response to South Australia’s seven-day lockdown.

However, they didn’t appear bothered by the change of location as they took the game on, using handballs to move the ball quickly and give their forwards opportunities to find space.

The Hawks had the upper hand in general play, but their final kick going into their attacking 50 consistently struggled to hit the mark.

The Crows started strongly and led by 22 points early in the third quarter before the Hawks kicked four straight goals to hit the front late in the term.

Brodie Smith and Lachie Murphy kicked goal of the year contenders, both in the second quarter.

Standing in the centre square, Smith threw the ball on to his boot from 65m out before it bounced through for a remarkable goal, while Lachie Murphy recovered after dropping a simple chest mark to kick a ridiculous snap from a tight angle.

For the Hawks, it was a missed opportunity after a strong performance with a draw against premiership contenders Melbourne last weekend.

James Cousins was substituted out of the game in the fourth quarter, replaced by 403-game veteran Shaun Burgoyne.

Meanwhile, David Mackay came into the contest, also in the final term for the Crows, replacing Murphy, who sustained an ankle injury. 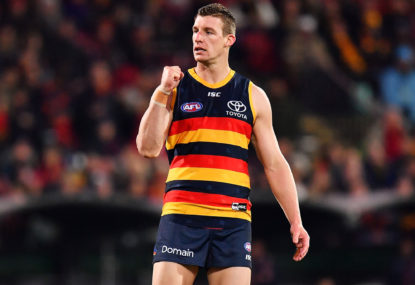