Cherry-Evans scored a double in a dominant display while Trbojevic also got on the scoreboard as the Sea Eagles cruised to a 44-24 win over the injury-hit Tigers at Suncorp Stadium on Saturday.

Centre Morgan Harper scored a hat-trick for the red-hot Sea Eagles who have now continued their ascent up the table having been bottom of the ladder in Round 5.

As well as his two tries, Cherry-Evans finished with two try assists and ran for 184 metres from 13 carries.

The 44 points scored matches Manly’s average per game since Round 14.

A sour note for the Sea Eagles however was interchange forward Josh Aloiai being placed on report in the first half after a cynical cannonball tackle on Alex Seyfarth in the 31st minute.

Seyfarth had to leave the field due to the challenge with a knee injury, leaving the Tigers down to just two on their interchange bench after Luke Garner (ankle) was an earlier casualty.

The Tigers later confirmed Seyfarth had injured an MCL, meaning the 22-year-old is facing a stint on the sidelines.

Despite being down two players for the entire second-half, the Tigers fought hard throughout with Ken Maumalo scoring a double while five-eighth Adam Doueihi and hooker Jacob Liddle were also impressive.

The Tigers, whose finals hopes are hanging by a thread after this loss, take on the Warriors next Friday in Brisbane while the Sea Eagles are playing Cronulla next weekend in Redcliffe. 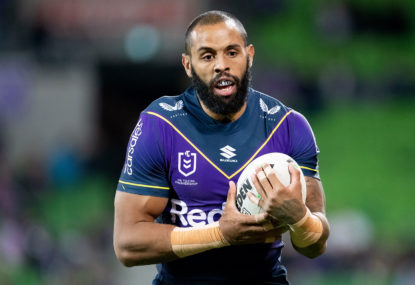 The Manly fullback was at his freakish best, finishing with three tries to put away the Cowboys and ensure his side finished in the top four. 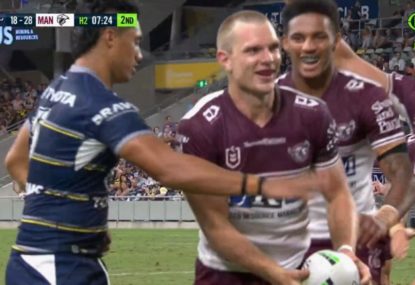