The sight of Bryan George Williams in full flight was one of the great sights in world rugby. There are few players who look so dynamic and fluent as Williams did when running. The massive sidestep, and also a fend, made him extremely difficult to bring down. In his prime he will go down as one of New Zealand’s greatest All Blacks and he was a hero of mine.

I followed the All Blacks in 1970 as a youngster, when there was no television coverage of the games, and of course YouTube was about 35 years away. Now, you can view old highlights of Williams’ brilliant performances on that tour. I have some memory of keeping a scrapbook with photos of the New Zealand tourists in South Africa. One photo of Bryan Williams embodies the power and artistry he possessed.

Williams never quite reached the heights of 1970, when on the hard South African grounds he was most suited to. He could run on top of the ground rather than be bogged down on the soft, wet New Zealand fields.

He still produced quality rugby from 1970 to 1978 and was inducted into the Hall of Fame in 2012. His stats are impressive: 269 first class games with 113 appearances for the All Blacks, accumulating 65 tries. In first class rugby he scored 825 points including 137 tries.

So much for the stats, just enjoy highlights of BeeGee’s career and appreciate one of the great wingers. 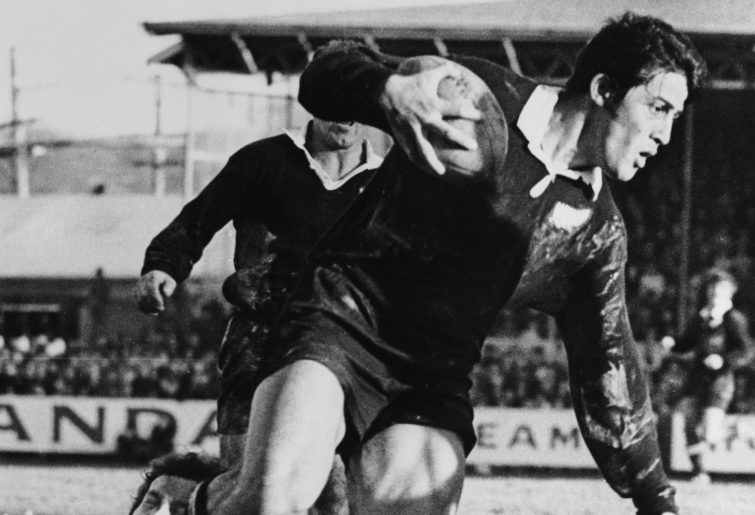 Bryan Williams is an All Blacks legend. (Photo by Central Press/Hulton Archive/Getty Images)

Why is he a hero of mine? I believe people want to emulate others and follow in their footsteps. When you see a player like Williams when you are ten years old, he makes a big impression on you. I started playing rugby at this time and subconsciously wanted to copy Williams.

Due to too many lollies at our grocery store I began playing as a prop, so there were not many opportunities to show off my sidestep. But as I grew older it did become part of my game. I appreciate you want to read about Bryan Williams, not Peter Darrow, but just trying to capture what influence a sublime player like BeeGee can have.

Players like that inspire you to try different things, aim for lofty heights and make you realise anyone can achieve their goals if persistent.

Bryan Williams was left out of a schoolboy rugby league team to tour Australia, and with sour grapes decided to give rugby union a shot. He made the Mt Albert Grammar School First XV as a 14-year-old, then at 16 years scored a try for the Ponsonby club senior team. At 18, Bryan was making regular appearances for the Auckland provincial team.

At 19 years old he determined there were three things he wanted to achieve in life, in order: become an All Black, have a career as a lawyer, and marry Lesley, his current girlfriend. I believe Lesley was not that happy at this ranking!

The All Blacks team was named in 1970 to tour South Africa and included the 19-year-old winger. In an interview he described himself as being “scared” when the plane arrived in Johannesburg, due to being a new All Black. But he settled into the team and soon announced himself as a rugby superstar. If you think of the impact Jonah Lomu made in the 1995 World Cup, you will have some idea.

BeeGee scored 14 tries in 13 matches and loved the hard, fast grounds of South Africa. He was a non-white player in a racist country, and quickly became an idol of the black community. His father was Samoan and mother Rarotongan. As an aside, Williams did not speak either of his parents’ languages.

Against Easter Province Bryan scored what he considers his best try, with a back heel on the ball that set him on the way, with two brilliant sidesteps, to a spectacular try like John Kirwan’s try against Italy in 1987.

In the fourth Test against South Africa he showed his audacity by sidestepping his way past two players in the in-goal area on the way to touching down. Not many players show the courage to do that. BeeGee tried it again in a festival match sometime later and Colin Meads, who was following Williams, said to him: “Put that bloody ball down!”

Brian Lochore described Bryan Williams “as being able to walk on water with many strengths including the sidestep, speed and a shoulder bump” to evade tacklers. BeeGee added that his fend was also a weapon.

Upon returning to New Zealand, Williams found he was more closely marked, and his form fluctuated. After a try drought he broke it by scoring tries against Scotland at Eden Park in the flood Test. He had also added goal kicking to his repertoire while away in South Africa, landing some monstrous goals.

In 1977 Bryan dislocated his hip against France and was never the same player again, with a reluctance to sidestep and speed down.

But in 1978 he made his comeback against Australia and scored a popular try. In Grant Batty’s opinion, “Williams had pace and power” and the two developed a telepathic bond on the field, confirmed by Batty’s kick to Williams in the 1974 match against the Barbarians.

Bryan Williams retired from All Blacks play in 1978 and provincial rugby in 1982. He went on to carve out a notable coaching career for Ponsonby, Samoa, Auckland, and the Hurricanes.

The longer a player is retired the greater their career becomes, and people soon forget about the weaknesses, form inconsistencies and faults. Jonah Lomu is regarded as one of New Zealand’s greats, but we like to forgive the form changes as we get older. I guess we like to have positive memories of players and storytelling becomes better with age.

BeeGee was no different. Sure I would have loved for him to have played like he did in South Africa in every game, but that would not have been humanly possible.

He is still a hero because of his career highlights, attitude and love of the game and his apparent friendly personality. If you see him in interviews, he is usually smiling, laughing and has a good sense of humour.

Bryan George Williams has had a distinguished life with his rugby, career and family and is a hero to many.