Aussies will be riding the underdog wave at the Tokyo Olympics

The Olympics are mere sleeps away and they look to be going ahead with new events on the schedule this year.

One of the newly introduced sports has been growing in stature for decades now, transitioning away from stereotypes into the professional sports arena: surfing, one of Australia’s great pastimes.

The sport is still very raw and unique to the everyday sports fan, not to mention the world. How professional surfing works is still a mystery to many, but can this be Australia’s chance at stealing a gold medal?

Professional surfing at the Olympics will be conducted over four rounds in both a men’s and women’s competition. Countries are capped at teams of two men and two women. From there, 20 surfers in each competition will compete in a four-round system of 30-minute heats and knockout rounds.

With roughly 12,000 beaches around Australia, it is undisputed that surfing is a vital part of the landscape and make-up of this unique country.

This is no more evident than in my hometown of Torquay, a mere ten minutes from the world-famous Bells Beach and the birthplace of the world’s biggest surf brand, Ripcurl. The town thrives off and survives on the surfing industry with thousands of people from all around the globe rushing to Torquay for the week of Easter for the famous Ripcurl Pro at Bells Beach, bringing in huge profits to small businesses.

Regarding the Olympics, all the talk has been surrounded around the Brazilian and USA teams respectively due to their extremely strong hand being played in Tokyo.

On the women’s side, they also are bringing current world number four Tatiana Weston-Webb and her comrade, possibly the most famous female surfer in South America, Silvana Lima.

On the other side of the media popularity charts is the world powerhouse Team USA. Winning nearly every sport in the Olympics history, they are a hot favourite to dominant this newly-added event.

The strongest card possible has been brought on both sides of the draw. The stereotypical poster boy of surfing, John John Florence the two-time world champion, and Florence’s lookalike little brother Kolohe Andino.

On the female side, multiple world champion Carissa Moore and future superstar Caroline Marks make up the team.

As always, Australia are coming into this event as the underdogs but they thrive off these situations. The Australians will not go down without a fight. Julian Wilson, Australia’s number one male surfer, is on the team. 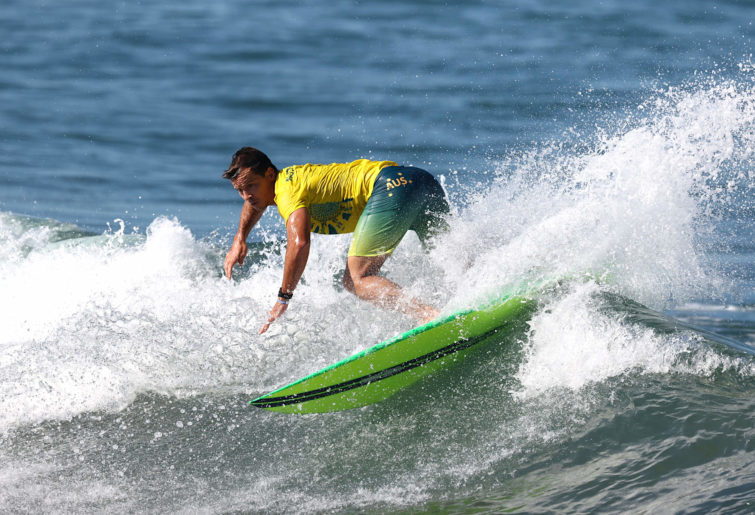 Born and raised in Coolum Beach, Wilson has become synonymous with Australian surfing, winning many events all around the world. A wonderfully skilled surfer, he thrives in all conditions with the ability to dominate big waves while also having the aerial ability to score high on small waves, which may be needed in Japan.

Wilson is well-known for paddling towards fellow Aussie Mick Fanning when Fanning was attacked by a shark during an event in South Africa, demonstrating how patriotic and committed Wilson is to never giving up on his country and mates.

His close friend and the most Australian competitor in the whole Olympic team, Owen Wright, will feed off the underdog tag as he has a true Australian underdog story.

Born on the south coast of NSW in the small town of Culburra Beach, Wright entered the world scene in 2006 and fought his way towards the top of the world rankings by 2015. In contention for his first world title, Wright was unaware that his life was about to change when he fell off a wave at the famous Pipeline on Hawaii’s north shore. Suffering a horrific concussion Wright had to learn how to walk and surf again, sitting out all of 2016.

Fearing his career was over, Wright fought back like a true Australian, winning the 2019 Tahiti Pro and announcing his full comeback to the world scene. These two true Australian patriots will battle until the end and are going to be hard to beat representing their country.

Then just when you think Australia is being severely underrated, the women’s team comes along, led by the Australian surfing poster girl Sally Fitzgibbons and her partner-in-crime Stephanie Gilmore. Fitzgibbons will give up her life for Australia. Born in Gerroa, New South Wales, she has been at the top of pro surfing since her debut in 2008, winning many events and coming runners up for the world championship in 2011.

Highly skilled in all conditions, Fitzgibbons has an amazing craft of turning small waves into big scores with her wide array of manoeuvres and speed. As mentioned, she will be doing everything in her power to win for Australia. Her counterpart and possibly the best surfer in this squad is the seven-time world champion Gilmore, undoubtedly the best female surfer since Layne Beachley.

Gilmore is well-known all around Australia for her heroics and achievements, therefore the weight of the nation is on her.

As a seven-time world champ, she is a master at all types of situations in the water. The surf at Tokyo will work in Gilmore’s favour with the small right-hand break where she thrives with high-scoring carves and the ability to work barrels to equal success.

Although Australia does not have the current star power that the Americans and Brazilians are bringing to the show, they bring the strength of patriotism and the Australian spirit.

The team thrives off these underdog moments in every situation. So, come the final day of the event, although every media outlet has Medina and Moore winning, there is a high chance we will be seeing the green and gold riding the wave to an Olympic victory.