Brumbies forward Nick Frost is the only player selected for the first time in a Wallabies squad, while there are several returning players.

Izack Rodda is in the squad for the time under Rennie. Western Force teammate Tom Robertson also returns having last played in the 2018 Rugby Championship against South Africa.

Toulon’s Duncan Paia’aua is back after a longer break. He last played for the Wallabies in 2017 against the Barbarians as a No.10.

Nic White and Scott Sio have overcome knee and hamstring injuries, while Jordan Petaia is back after missing the 2-1 series win over France with a quad injury.

The 42-man squad contains eight uncapped players, with four others having made their debuts against France earlier this month.

Wallabies coach Dave Rennie said: “The connection this group is forming is growing every day and we’ve picked a squad of players here who are willing to work hard for each other.”

“We know we’ve still got a way to go to get to where we want to be but that challenge is exciting and something we’re looking forward to.

“We have a great opportunity coming up in the Rugby Championship and Bledisloe Cup Tests to build on the momentum we picked up during a tough French Series.” 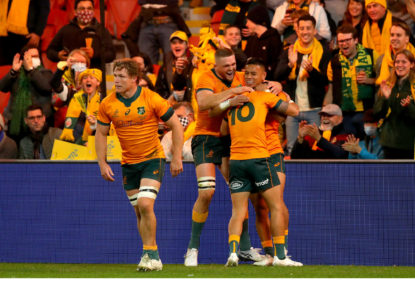 Noah Lolesio of the Wallabies celebrates his try during the International Test Match between the Wallabies and France at Suncorp Stadium. (Photo by Kelly Defina/Getty Images)


The opening Test venue and date are in doubt due to the escalating Covid situation in Australia.

The Wallabies are due to play the first game on August 7 in Auckland with two more Tests against New Zealand on August 21 in Perth, and August 28 in Wellington.

Rugby Australia and New Zealand Rugby are hopeful of government exemptions to allow players to take part despite the quarantine-free travel bubble between the countries being paused for two months.

Restrictions on travel from NSW and Victoria to New Zealand were already in place, but New Zealand extended the two-month ban to all of Australia. The Wallabies are based on the Gold Coast.

“Rugby Australia’s position has always been to prioritise the health and safety of its players, staff and fans, and today’s announcement only reinforces that. We want to thank the Australian Government as well as the New Zealand Government for their support so far, as we aim for a positive outcome in the coming days.

“The Wallabies team have been in a secure bubble since the conclusion of the France Series, with the squad assembled on the Gold Coast. The players are regularly tested for Covid-19 and have maintained strict bio-security protocols as recommended by the Return To Play Committee and the relevant health authorities,” Marinos said.