Match report: Lions roar back to down Springboks in first Test

The British and Irish Lions have roared back to beat world champions South Africa 22-17 in a Cape Town comeback win, with Dan Biggar’s boot proving the key.

Biggar kicked four penalties and a conversion for a 14-point personal tally to take the Lions to victory after they were 12-3 down at halftime on Saturday but came back strongly in the second half. 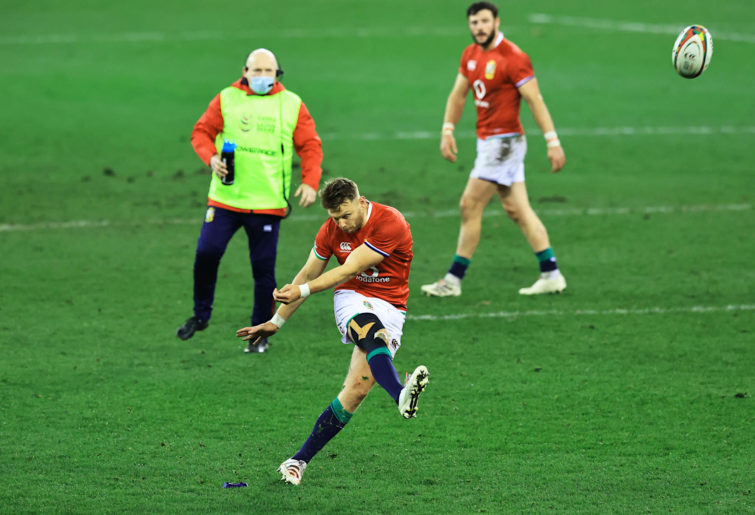 Luke Cowan-Dickie scored the Lions’ only try with Owen Farrell adding a key late penalty while the Springboks’ points came from a Faf de Klerk try and four first-half penalties from Handre Pollard.

The two teams meet again next Saturday in the second Test, also at the Cape Town Stadium.

The Lions roared back into the contest with a vastly improved second-half display as they gained the physical advantage and put the Boks under pressure with the high ball, which turned the tide in their favour.

The home side made too many errors as they visibly wilted in the closing quarter, stung by a lack of match practice and just one Test in 20 months since they lifted the World Cup in November 2019.

After a breathless opening 15 minutes, the Boks were the first on the board when Pollard landed a penalty, and then added another following a late tackle on de Klerk by Sale Sharks teammate Tom Curry.

The hugely impressive Maro Itoje effected two excellent steals on the ground at the ruck, but the Boks continued to apply pressure and Elliot Daly gave away a penalty at the ruck and Pollard made him pay.

There was a rare line-break at the end of the first half by centre Robbie Henshaw, but he spilled the ball forward under pressure from Willie le Roux when he had options for the pass on either side of him for what would have been an easy score.

An invigorated Lions turned down two kickable penalties early in the second half and their ambition paid dividends when Luke Cowan-Dickie scored from a maul that was too powerful for the home defence.

Le Roux looked to have hit back almost immediately with a breakaway try from Makazole Mapimpi’s kick, but he was adjudged to have been marginally in front of the kicker and the effort ruled out.

But the Boks did get their score, Mapimpi again with the kick ahead and this time de Klerk put the finishing touches after there was a suspicion of a knock-on from Pieter-Steph du Toit in the build-up.

Biggar kicked two more penalties to reduce the deficit to a single point again, before the Lions led for the first time just past the hour-mark from another penalty as the tiring Boks’ error count started to mount.

The home side had another try ruled out by the TMO for a knock-on in the build-up to Damian de Allende’s score, but Farrell added another penalty with two minutes on the clock and it was the tourists who won the arm-wrestle.