British and Irish Lions coach Warren Gatland warned his players to be wary of a Springboks backlash after the tourists’ stirring come from behind win in their opening Test.

The Boks led 12-3 at halftime before Dan Biggar and Owen Farrell kicked the tourists to a 22-17 win over a fading hosts.

Former Lions skipper Brian O’Driscoll summed up the mood post-match, telling the BBC it was “ultimate game of two halves”.

“I couldn’t believe what I was watching,” O’Driscoll said. “We couldn’t fire a shot and the Boks couldn’t do a thing wrong, and then it turned around.”

O’Driscoll later speaking in a YouTube interview for Off The Ball in Ireland savaged the Springboks’ call to replace their entire front row at halftime. The introduction of the Boks so called ‘bomb squad’ was pre-planned but had a major impact, he said.

'I would be sick if I was a Springbok' | ????????@BrianODriscoll looks at how the Springboks blew their first half lead against the Lions | ???? @VodafoneIreland | #UniteThePride

“It came back to shoot them,” said O’Driscoll. “In the first half they had the Lions’ scrum in major trouble but when the replacements came on they didn’t have the dynamism. It’s a real miss by the Springboks and as well as the Lions played, to change all three at halftime, that’s a tactical error.

“That front row impact was significant. They offered nothing in the loose. The were brought on to scrummage and I don’t know if they got one penalty from scrummaging in the second half when the other front row was dominant.

“I felt they were trying to sit on their lead.” 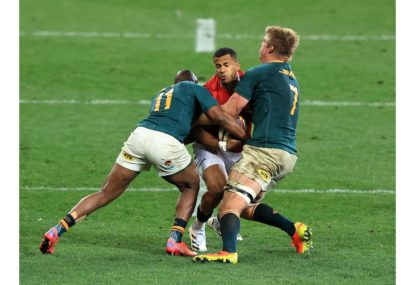 The Lions made an ill-disciplined start with Handre Pollard kicking four penalties.

“They’ll be hurt from this because they’re an incredibly proud nation and world champions,” said Gatland.

“Next week will be even bigger and tougher I would expect.

“The bounce of the ball could have gone any way for both teams. If a couple of calls had been different that might have affected the result.

“It was a really tough, tight Test match. But thankfully we’ve come from behind and finished really strongly. I thought we got stronger and stronger as the second half went on.”

Gatland took the Lions to Australia in 2013 and won the first match before losing the second. The Lions did, however, go on to win that series.

“I expect they will be a lot stronger in the next two matches,” said Gatland.

“But we feel like there’s an awful lot more in us too. From a conditioning point of view it looks like we’re getting stronger and are able to keep the intensity and the pace going for the whole 80 minutes.

“That’s a really pleasing sign of how hard we’ve worked over the last six weeks or so. The impact of our bench was probably more significant than theirs.”

Gatland said his halftime message was: “Look, we are still in this arm-wrestle even though we are down, just keep our composure.

“We didn’t think they’d create a lot of attacking opportunities. In that last passage of play we were coming off the line, making big tackles and they weren’t going anyway. To beat the world champions first up in their own back yard is really, really special.”

South Africa had a terrible buildup affected by Covid, but their coach Jacques Nienaber was dismissive of external factors, focussing instead on the aerial battle.

“The kicking game was won by us in the first half and we got the rewards, but the second half was a different story,” he said.

““They won that battle and it gave them territory. We had to scramble and could not cope.

“Our discipline also wasn’t great in the second half.

“The sad thing is that we actually highlighted that at half-time and said we needed to make a step up there. And obviously we didn’t.”

The Lions had been upset at the presence of a South African TMO, Marius Jonker, but it was Jonker who played a decisive role, judging Willie le Roux offside to deny the Boks a try.

“As soon as we saw the try was given we, as coaches, thought it was going to be extremely tight,” said Nienaber.

“But I completely agree with and trust the decision they made. That is their profession, that is what they are good at. It could have gone both ways in my opinion, but I 100 percent agree with the TMO decision.

“Sometimes those inches go for you and you score a brilliant try from a counterattack and sometimes it goes against you.”

The coach said he was confident the three-match series was there to be won.

“Definitely it is. We have to salvage it. We will look at the video and there are definitely things we can sort out.”

Former Lions coach Ian McGeechan felt the Springboks’ lack of fitness was key to the resuult.

“I think in the first half [the Lions] were forcing it. They got into contact one-on-one and lost that contact and lost any momentum that they did have,” McGeechan said on Sky Sports.

“In the second half they got out of their own half and structurally, they did really well. Their kicking game was excellent – their kick chase.

“Then when they got into South Africa’s half they were playing through phases. That’s where South Africa really kept giving the penalties away and giving the game away. But I felt they fell off their game badly.

“I don’t think South Africa had the energy and the fitness to actually raise their level to then match the way the Lions were playing… To be honest, they looked a really tired side by the end of it.”