The Storm lock has signed a four-year contract, believed to be worth a total of $2.6 million, as reported by The Daily Telegraph.

It was also reported the fourth year of that contract has only $320,000 guaranteed for when Finucane is 33 years old, making it a much more palatable deal for the club for a player at the twilight of their career.

The verdict
In the short term, it’s a fantastic signing for Cronulla, but they’ll need to become immediate premiership heavyweights to get what they want out of it.

There is a risk that Finucane’s unrelenting playing style means his form doesn’t age well, but the Sharks will hope they can strike quickly and work that problem out later if it actually arises. 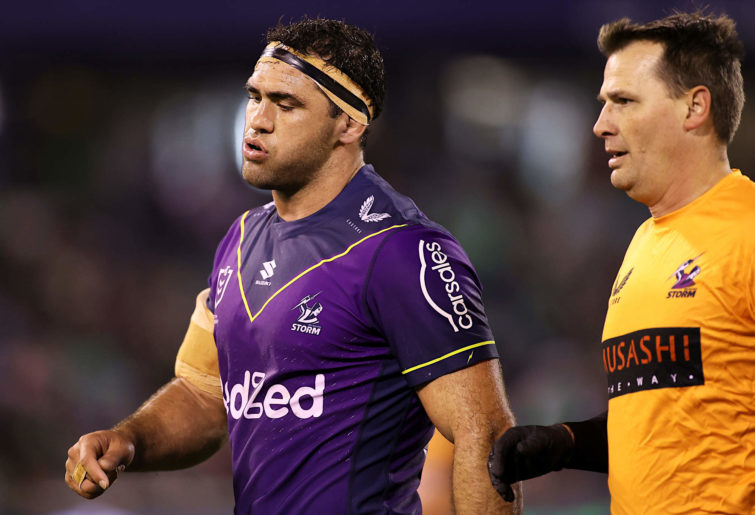 2024 is going to be the biggest juggling act for their salary cap if the likes of William Kennedy, Blake Brailey and Toby Rudolf continue their improvement.

Both men will be looking at extensions for that season and will demand serious money, especially Kennedy.

The Sharks have also only signed Matt Moylan on a one-year extension, so if they are to get into the market for a halfback in the next year or two, it might leave them a little short of being able to sign a marquee name.

Do they believe Connor Tracey can play in his preferred position at NRL level in the long term? Getting this decision right is ultimately going to be the most important piece of building the premiership puzzle.

They’ve already outlaid decent money to secure Nicho Hynes and Cameron McInnes for the 2022 season, and with the progression of their local juniors over recent seasons, they should realistically be targeting the top four and be disappointed if they don’t achieve that goal.

The Wests Tigers and St George Illawarra Dragons were believed to have offered more money to secure Finucane’s services, but the vital factor in heading to Cronulla is believed to be the relationship he has forged with incoming coach Craig Fitzgibbon during State Of Origin.

Considering the Tigers’ awful recent history of signing players at a similar age on huge contracts, it’s almost unbelievable they were prepared to take that risk again.

They will predictably come under heavy media scrutiny for failing to secure another big name, but their squad as a whole is a long way from being just ‘a Dale Finucane away’ from contending.

The Dragons six weeks ago wouldn’t have had the finances to secure Finucane’s services, but the sacking of Paul Vaughan freed up around $800,000 for the 2022 season.

It would have been a terrific addition for the Red V and one could argue their fans should feel worse than Tigers fans about missing out.

Where does Finucane fit?
No forward has played in more grand finals since he entered the league in 2012 and his career winning percentage of 71 per cent makes him an incredibly important asset.

The Sharks recruited Cam McInnes to play lock back in February, so we will have to assume he will start at prop alongside Rudolf.

With Aaron Woods and Aidan Tolman moving on in 2022, they’ll be putting a lot of faith in Braden Hamlin-Uele and Royce Hunt to perform off the interchange and they might lack some genuine depth if there are any injuries to their starters.

Finucane’s role in Melbourne saw him play a lot of first receiver in the middle third of the field, but with Cam McInnes in the side, he could be resigned to playing purely a yardage role.

Just how those two co-exist will be a small teething issue but Finucane’s reputation for being the ultimate professional means it will be nothing more than that.

The other thing Finucane will do is be the defensive ace in the middle, controlling the speed of the ruck and he will no doubt help restore their reputation of being tough and uncompromising, something that has gone missing since the retirement of Paul Gallen.