Cooper, was in deep, thoughtful territory on Monday as he gave a joint media conference with Rennie, speaking of the changes in his personality since he was last in a Wallabies jersey in 2017.

While the Wallabies have been careful to frame Cooper as a training ground mentor to No.10 Lolesio and the other young Wallaby backs, Rennie’s answer when asked to name the playmaker pecking order was illuminating.

Asked if the order of status was Lolesio, Reece Hodge, Matt To’omua and then Cooper, Rennie replied: “Noah has started the last three Tests and it’s fair to say he’s No.1.

“Quade’s job is to come in here and influence us as selectors, likewise with Matt and Reece who gives us great utility value and played 79 minutes on the wing last Test.

Cooper’s re-emergence comes thanks to an unusual set of circumstances with COVID restrictions impacting Rennie’s ability to bring in players during the series who live in NSW and Victoria.

Cooper, who finished his most recent playing stint in Japan seven weeks ago, has been training with his brothers’ rugby league team in Queensland, and keeping fit with tough 5am training sessions that he documents on Instagram.

The pair met for coffee (“I paid,” joked Rennie) and Cooper convinced the Kiwi coach that he was ready to make a contribution.

“He’s learnt a lot through his experiences, matured,” said Rennie.

“It’s very similar to James O’Connor, in fact. My knowledge of Quade and of James was mostly though the media.

“I coached against both those boys and respected them as players so it’s been good to get to know them.

“The conversation we had last week, I talked a lot about character in this group, about a young group of men who are impressionable and really need Quade to come in and be a positive influence.

“As you can tell from how he’s spoken today he’s highly motivated. We saw him running around this morning and he looked as sharp as ever to me.

“Even his voice, the direction he’s giving some of our players was really positive. I’m really excited about what he can add to the group.” 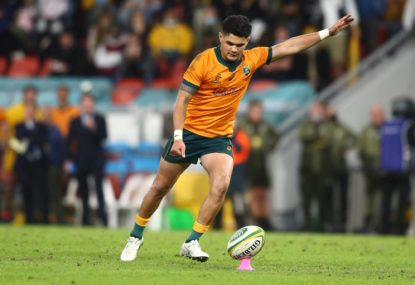 In 2018 Cooper fell out with Queensland Reds coach Brad Thorn and sent to play club rugby on massive wages.

On Monday he spoke candidly about his change in attitude, and what he can bring as the Wallabies face the biggest challenge in world rugby.

“The situation I was in, that’s in the past,” said Cooper. “I had a few things happen. Club football I really enjoyed that, enjoyed my time in Melbourne and then went to Japan.

“I had some great experiences along the way and a lot of growth.

“In terms of do I feel empty, not really. I had a lot of opportunities to fill my life with a lot of experiences and try and grow in areas where I was falling short.

“This opportunity back in the Wallabies, I hope it provides a pathway, an option for people, whether it’s in football, sports or everyday life, that they just continue to stay in the fight – work hard on themselves, improving and growing each day, so when an opportunity like this does arrive you’re there to take it, enjoy it and be present.”

He said he has no expectations beyond the current call up, but was ready to make the most of it.

“When you’re inside this environment you have a case to push,” Cooper said. “You can earn a spot each day by how you turn up to work, approach every training and what you provide to the team.

“Being able to be in this opportunity to fight for a spot, whether that’s in the squad or a potential game, the first challenge is to be ready.

“I have to make sure if my number’s called I can provide support to this team.

“I didn’t every expect to be in this position so I’m grateful for the opportunity.

“I’m excited about being in this environment and contributing however I can, whether that’s offering some support to a young guy like Noah, provide an extra voice, or be an extra player to train.”

Cooper, who shrugged off questions about his citizenship status, has started working with the team, and had plenty of praise for Lolesio, whose late penalties sealed the first and third Test against France.

“I think we can help each other,” said Cooper. “Even at 33 I’m trying to learn, to soak up as much information as I can.

“Watching how he went through those Test matches, he’s a phenomenal player and I know he’s going to be a great asset for Australian rugby.

“His composure at the end of those Test matches, to nail those kicks at goal, already shows a steady resolve in the kid.

“He’s a guy that’s eager to learn, has a strong head on him and looks to be a great leader in the No. 10 jersey.

“I’m excited to work with him and have an exchange of information.If there’s anything I can offer be ready to put my arm around him and help him out.”

Rennie also took another chance to boost up Lolesio, but stressed he is a work in progress.

“We’re happy with Noah,” Rennie said. “He’s grown a lot through the French series but he’s a young man who is at the foot of the hill in regards to Test experience.

“Quade’s played plenty and he’s got a good brain, is very innovative, great skill set and getting alongside Noah that experience will be invaluable.”

If Lolesio is at the foot of the hill, Cooper is adamant he’s not over it.

“I don’t have any expectation to be a better player than I was but it’s about showing while I’m in here I can provide a great work ethic,” Cooper said.

“The last two or 3 years I’ve been able to push and motivate myself, not to make a team, but it was about me trying to grow as a person.

“The Wallabies have been doing great. To watch the team and how much they’ve grown is something I’ve enjoyed.

“I’ll be supporting and doing whatever I can to make sure the preparation goes well for this team and if you’re picked you put your best foot forward.”