And on Monday night the pair were back in the pool to resume their head to head battle in the heats of the 200m freestyle.

Ledecky qualified fastest for the 400m final while Titmus left energy in reserve, winning her heat but qualifying third fastest for the final. Titmus had trailed by 0.66s after the first 200m but she brought it home strong with a sensational last 100m.

“I can’t believe I actually pulled it off,” Titmus said after the race.

“This past year I don’t know whether it’s gone fast or slow, but to get here was a relief. To come here and do the job. I’m over the moon.” 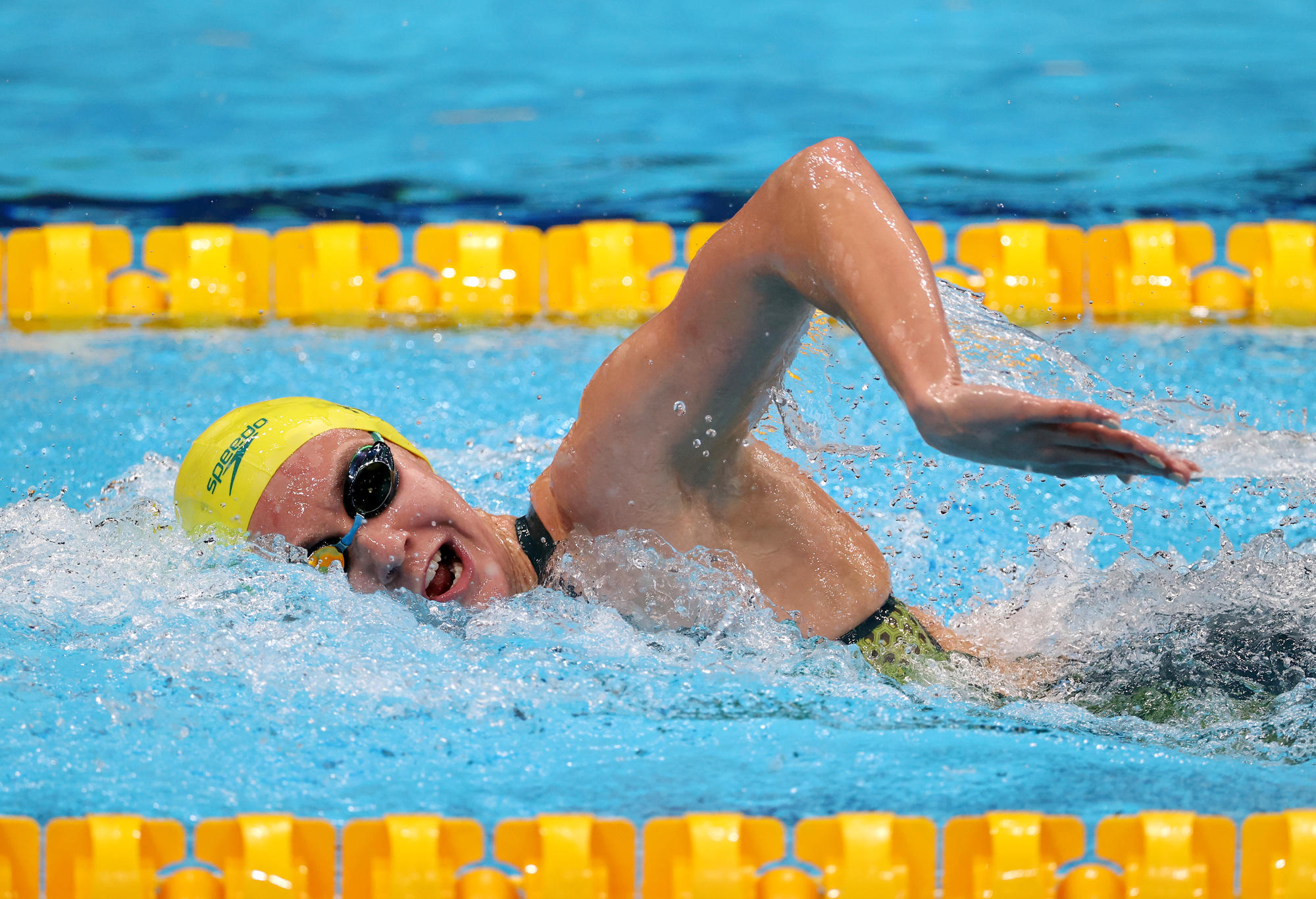 “I wouldn’t be here without her (Ledecky). She set this incredible standard. All credit to her for the swimmer she is.

“I’ve been trying to chase her. Really exciting now we have this battle going. It’s really fun to race. So, yeah, that’s the best part about it. The race I tried to stay as composed as I could. Then just tried to stick to my race plan.”

Titmus’ time of 3 minutes, 56.69 seconds was an Australian record and just 0.23s off Katie Ledecky’s World Record set at the Rio Olympics in 2016.

Her coach Dean Boxall has become an internet meme with his incredible celebration after the gold medal. The celebration summed up how Australia felt about the race.

Titmus’s gold medal was reward for her family’s sacrifice. Six years ago father Steve, a prominent TV presenter in Tasmania, mum Robyn and sister Mia moved with the then 14-year-old Ariarne from home to Brisbane for her swimming.

“This has been a very difficult and stressful decision for the whole family because we love Tasmania and the people, but we have no choice,” Steve said at the time.

“The decision is also not just based on Ariarne’s swimming, but long-term opportunities for the whole family.

“The regrets in life are not what you did, but what you didn’t do and we want to give, not just Ariarne, but also her sister Mia, the best opportunities in life, not just in sport but for their future education and working careers.”

She tackled her final year of high school at St Peters over three years, coached by Boxall, who was in the stands going nuts when she touched the wall on Monday. Her family was also going crazy, back at a gathering of swim team parents, and legend Dawn Fraser, in Noosa.

“It is massively disappointing all around that we can’t go but the safety of the Japanese people and the world is far more important than us attending the Olympic Games,” Steve said before the race.

“But you are kidding yourself if you don’t say it is enormously disappointing.”

Any lingering disappointment was blown away, as Titmus did the same to Ledecky over the final 100m.

Meanwhile, Australia had more success on Day 3 in the pool with Kyle Chalmers taking Australia from sixth to a bronze medal with an amazing anchor leg in the 4x100m men’s freestyle relay.

The USA won gold from Italy.

The Australian team of Matthew Temple, Zac Incerti, Alexander Graham and Kyle Chalmers were an outside chance to win a medal but it looked like that chance was dead and buried before Chalmers jumped in the pool.

His anchor leg of 46.44 was the best 100m split of the race proving just how much he put in to get Australia a medal.

Emma McKeon, who had the fastest leg of the women’s freestyle team in the final, picked up a bronze medal for Australia in the women’s 100m butterfly. She finished with an Ocenaia record time (55.72) but it wasn’t quite enough to beat Yufei Zhang from China and Maggie Macneil from Canada.

“What a swim, a medal at an Olympic Games is nothing to be sneezed at,” Aussie great Leisel Jones said in the Channel 7 commentary.

“Well done, Emma, we are so proud. A gold medal and a bronze medal from two races. That is outstanding.”

“I am pretty pleased. I will be on the Olympic podium so you can’t be more happy,” McKeon said.

“Really, I was just focusing on my race. I could see the American girl on the other side after me and I realised we were 0.01 off third and fourth to get my hand on the wall before her. ”

It was better news for Kaylee McKeown and Emily Seebohm who safely made it into the finals of the 100m backstroke after finished second and third in the second semi-final.