Australia’s Kaylee McKeown, whose father Sholto died of brain cancer a year ago, won Australia’s third gold medal of the Tokyo Olympics, surging home over the final stages and dropping an F-bomb on live TV in the aftermath.

If overcoming the loss of her father at 19 to come home strong and win a hotly contested final doesn’t give her a place in folklore, her reaction surely will.

A shocked McKeown, who blew a kiss to her late dad after the race, swore on Channel Seven after the race, as the magnitude of her win sunk in, when she was asked what her message was to her mum Sharon and sister Taylor watching back home.

McKewon swims with a tattoo on her foot reading “I will always be with you” and her mum Sharon told her via Channel Seven “your daddy would be so proud.”

“It’s been pretty tough but Kaylee had been able to focus and fly under the radar,” said Sharon.

“She always knows dad is watching her. Swearing on TV. I’ll have a word to her later.”

Kaylee said later that she knew her das was with her every step of her journey.

“I know he would be very proud,” she said. “Everyone has their own story and I’ve used mine as a fire within my belly.”

Emily Seebohm finished seventh in the race, leading 7 host Jo Griggs to suggest: “It’s the first time we’ve had a Seebohm and an f-bomb in the same race.” 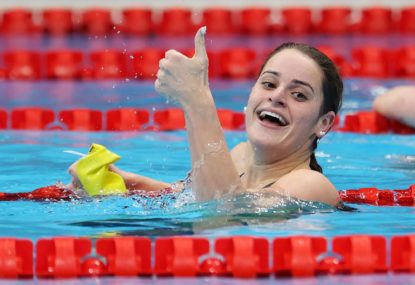 Kaylee’s sister Taylor, a relay silver medallist at Rio 2016, was in tears.

“That is so amazing I don’t even have words. I can’t talk, I literally can’t talk, I’m so happy for her,” said Taylor.

“She just looked so beautiful on TV as well and did it with such grace.”

FOLLOW THE SESSION LIVE IN THE COMMENTS FIELD BELOW