So it is a little surprising that the spiritual home of cricket would be found on a hillside, on an island where five days of sunshine is almost something mythological.

Alas it is, since 1814 the English cricket ground of Lord’s, named after its founder Thomas Lord, has been known as the home of cricket. It is owned by the Marylebone Cricket Club, which was formally the governing body of cricket and still holds considerable influence over the game including the copyright for the Laws of Cricket.

Players from all countries talk about the incredible honour of playing at Lord’s and all the history that goes along with the fabled ground. Everything about this ground screams grandeur and tradition.

Walking through the Long Room is described by Wisden editor Lawrence Booth as “the most evocative four walls in world cricket”. It’s filled with the applauding MCC members and lined with paintings of famous cricketers dating back to the 18th century.

No ground can match Lord’s for its sense of majesty and reverence. A full house at the MCG on Boxing Day would be a spine tingling feeling for any cricketer but even with the 100,000 people in the colosseum-like stands enveloping you, it still doesn’t carry the same history as Lord’s. 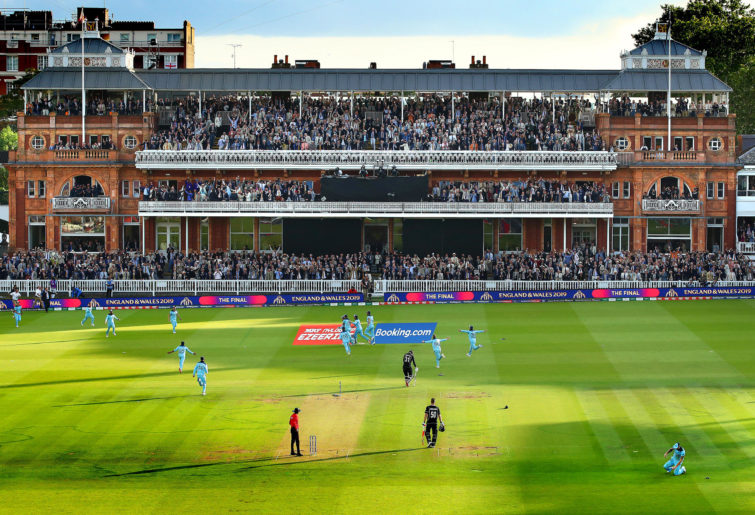 One of the more significant parts of playing on the sloped turf of Lord’s are the honour boards that adorn the Lord’s Pavilion. These boards show players that have taken the challenge at the home of cricket and excelled.

Scoring a 100 or taking a five-wicket haul in either Test or ODI cricket will see your name etched into history forever adorning the honour boards.

Over the years some incredible names have not managed to have their name entered into the Lord’s folklore. Titans of the ’90s Brian Lara and Sachin Tendulkar could not quite overcome the ground. Masters of the ball like Dale Steyn, Wasim Akram, Dennis Lillee and English nemesis Shane Warne never managed to conquer the fabled cricket ground.

I decided to have a look at the players that have managed to get their names on to the Lord’s honour boards and make a Test XI. I have tried to balance the players careers and their performances at Lord’s itself when compiling the side.

1. Sir Gordon Greenidge
Career average: 44.72, Lord’s centuries: two, Lord’s high score: 214*
He was actually eligible to play for England but instead he was a tale of what could have been as the West Indian opener would go on to play 17 years for the West Indies and become known as one of the greatest and most destructive openers in the history of Test cricket.

His high score of 214 not out at Lord’s came in 1984 during the fourth innings as he guided his side to the 342 runs needed for victory. That run chase still stands as the highest successful run chase at Lord’s.

2. Graeme Smith
Career average: 48.25, Lord’s centuries: two, Lord’s high score: 259
Named South Africa’s youngest Test captain at just 22 years old, Smith fashioned himself into one of the best Test captains as well as being one its best openers. The tall, powerfully built man fashioned a career on toughness. Few can forget coming out to face Mitchell Johnson at the SCG with a broken hand to try and save the game.

His role as an opener was pivotal to South Africa’s success, having never lost a game in which he scored a 100. His 259 at Lord’s holds the distinction of being the highest score by a foreign player.

3. Sir Donald Bradman
Career average: 99.94, Lord’s centuries: two, Lord’s high score: 254
Bradman is a name that is forever carved into cricketing mythology. Bradman’s exploits are the stuff of sporting legend and England was the scene for many of them. He holds batting records that will never be broken on the way to forging his storied career.

His high score of 254 at Lord’s came in 1930 during Bradman’s first tour to England and despite experts saying his cavalier technique wouldn’t translate to English pitches he plundered 974 runs at an average of 139 during the series, which included two double hundreds and a triple hundred. Later in his life Bradman rated his 254 at Lord’s as his finest innings saying, “practically without exception every ball went where it intended to go.”

4. Steve Smith
Career average: 61.80, Lord’s centuries: one, Lord’s high score: 215
His propensity and appetite for run scoring has drawn comparisons to fellow compatriot Donald Bradman. With many of the Test scoring records Smith sits second only too the Don. Even his highest ICC ranking of 947 is second only to Bradman.

The talismanic Australian has a technique all of his own that has allowed him to score runs across the globe and his career average not only has him comfortably above his peers but many of the greats of yesteryear. Smith’s 215 at Lord’s was the first double century by an Australian at Lord’s since the Second World War and was Smith’s highest Test score up to that point.

5. Kumar Sangakkara (wicketkeeper)
Career average: 57.40, Lord’s centuries: one, Lord’s high score: 147
The elegant left hander finished his career as Sri Lanka’s best batsman and has a long and distinguished career. His ability to score runs abroad as well as at home meant that he finished as Test cricket’s sixth highest run scorer and with a Test average higher than greats like Ricky Ponting, Brian Lara and Sachin Tendulkar. His 147 at Lord’s helped Sri Lanka secure their first series win in England.

6. Sir Garfield Sobers
Career average: 57.78, Lord’s centuries: two, Lord’s high score 163*
He was the greatest all-rounder in Test cricket. Like Bradman, his exploits are incredible. He holds the record for the highest maiden century of 365 not out back in 1958. That would remain the highest Test score for nearly 40 years. 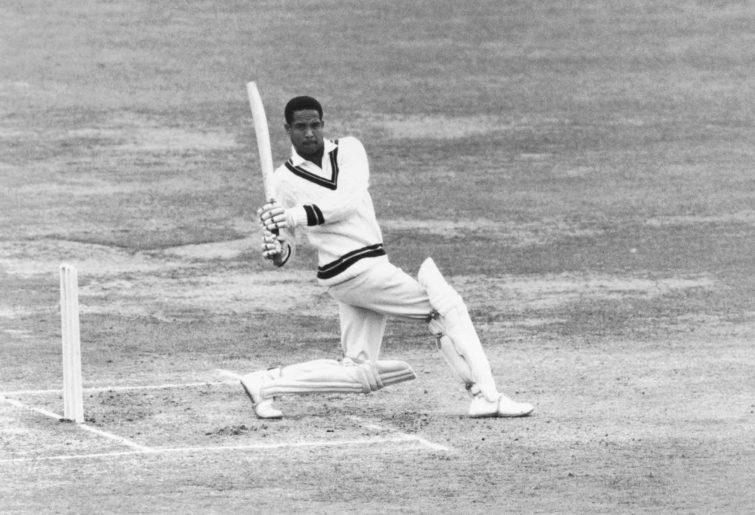 Having the ability to bowl medium pace and spin to complement being one of the greatest Test batsmen, Sobers had many strings to his bow. His high score at Lord’s was during his first tour of England as captain in which he won the series 3-1 and amassed 722 runs at an average of 103 and took 20 wickets at 27.

His innings of 160 not out came as part of at 270 runs scored in just 320 minutes to power the West Indies from uncertainty to batting England out of the game.

At times he was a devastating hitter of the ball and could bat anywhere in the order. He was known not only for the pace of his bowling but his ability to bowl change-ups and altering his run-up to throw off the batsmen.

He was a member of the 1948 Invincibles tour and played his final Ashes series in 1956. His 109 at Lord’s was his first in England and in his final tour with a depleted bowling line-up Miller bowled more than 70 overs for the match.

His first innings 5-72 was backed up with a 5-80 defending a total of 371 and it was Miller’s first and only ten-wicket match of his career.

8. Sir Richard Hadlee
Career bowling average: 22.29, Lord’s five-wicket hauls: three, Lord’s best bowling: 6-80
He was New Zealand’s finest cricketer and a fierce competitor. He was considered an all-rounder with a healthy batting average of 27 to accompany his incredible bowling average. When Hadlee finished his career he held the record for most Test wickets. He was dubbed the original ‘Sultan of Swing’ because of his ability to swing the new ball.

His 6-80 at Lord’s helped secure a drawn Test, which would pave the way for New Zealand’s first Test series win in England.

Despite being considerably shorter compared to the other great fast bowlers Marshall was one of the most complete fast bowlers in history, adept at taking wickets in all conditions. In seven consecutive series between 1982 and 1986 he took 21 or more wickets in a series and in the last five of those series he averaged under 20 with the ball.

10. Clarrie Grimmett
Career bowling average: 24.21, Lord’s five-wicket hauls: one, Lord’s best bowling: 6-167
This New Zealand-born Australian and inventor of the ‘flipper’ delivery was late to the Test cricket scene, debuting at the age of 33. Between 1924 and 1936 he took 214 wickets at 24. He was the first bowler to reach 200 wickets and one of five bowlers to debut after 30 to take more than 100 wickets.

Taking an average of six wickets per match, he held the record of fastest to 200 Test wickets until 2018. His best bowling at Lord’s came in the same game as Bradman’s famous 254 in a marathon 53-over effort, helping Australia claim a famous seven-wicket win.

The metronome-like efficiency of McGrath also made him one of the more economical bowlers, adding the pressure he exerts on batsman. McGrath’s remarkable eight-wicket haul came in 1997 in a rain-affected match that eventually finished in a draw. However, McGrath’s dominance held England to 77 – their lowest score at Lord’s since 1888.

There have been a huge number of incredible performances at the hallowed ground over the 200-plus years Lord’s has been in existence and I’m sure that another’s XI could look very different. This side carries a vast amount of batting depth and some excellent bowling options and would put up quite a challenge against any XI.