The meteoric rise of Josh Giddey is a fairytale.

Two years ago he was only just 16-years-old, not even old enough to drive a car on his own.

Now, at 18, walking in the shoes of an oversized guard standing at 6-foot-8, he gets the opportunity to ply his trade with the Oklahoma Thunder after being selected at pick No.6 at the NBA Draft in Brooklyn.

When NBA Commissioner Adam Silver read out his name, his parents – Warrick and Kim – mobbed him with hugs before he made his way to the stage.

Giddey looked genuinely in awe of being inside the Barclays Centre, at an event he probably watched from back home in Australia every year; an event he hoped one day he’d get invited to.

And this year he did.

“This is what I’ve been working for my whole life. To live my dream playing in the NBA, with the support of my family and friends back home, it means the world to me. I’m just looking forward to showing what I can do on a world stage,” he said.

Sitting on the couch getting interviewed by ESPN reporter Malika Andrews after he was selected by the Thunder, Giddey was asked what parts of his parents’ game will NBA fans see, considering they both played in the NBL.

“Both my mum and dad have completely different games,” he said. “Dad was a defender, hustler, rebounder type player. Mum was a shooter, scorer.”

“A little bit of the best of both worlds,” said Andrews. “Warrick, I’m wondering if you have figured out the time difference and how you’re going to be watching all of your son’s games.”

“It’s going to be tough from Australia,” said Warrick Giddey. “But we’ll make the journey over here as quickly as possible and we want to be there from day one supporting him.” 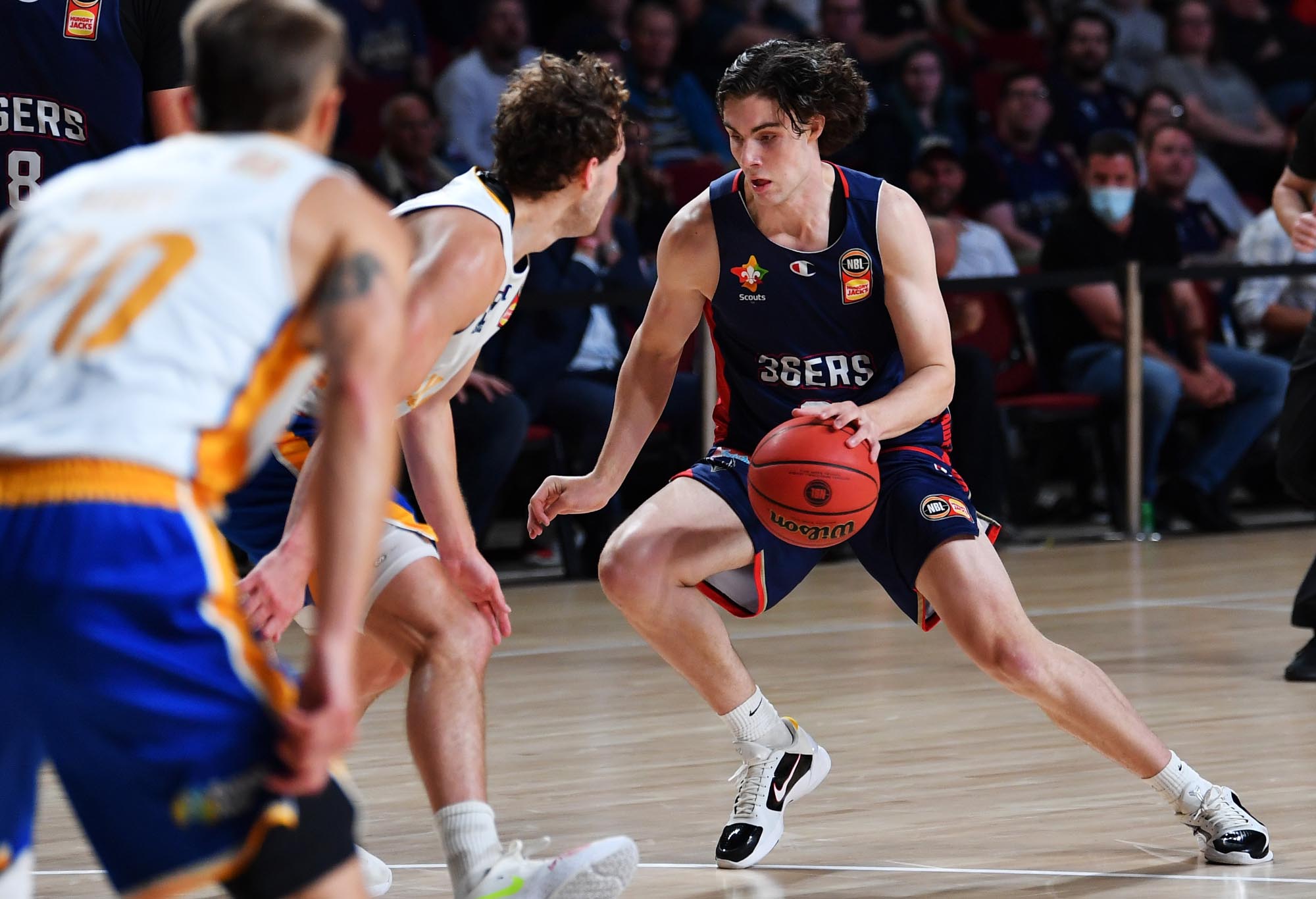 Cade Cunningham was selected with No.1 pick by the Detroit Pistons. The excited 19-year-old ended his interview by putting on sunglasses facing the camera and told Pistons fans “I’m all the way in.”

Houston Rockets selected Jalen Green at pick No.2, Evan Mobley went to Cleveland with pick No.3, Scottie Barnes ended up at the Raptors with pick No.4, Jalen Suggs was selected by Orlando with pick no.5.

Before the draft most pundits had Giddey as high as seven and as low as 14. No-one predicted him to land at the No.6 pick.But as draft day approached, the hype and interest in the Australian grew, and grew.

Golden State Warriors sent executives to watch Giddey play in Las Vegas against Nigeria where he shot 14 points, grabbed four rebounds and dished out three assists. The Ringer’s basketball writer Kevin O’Connor had the Warriors snagging him in his Mock Draft with their pick largely for his vision, LaMelo Ball type upside and his size.

What the Warriors execs saw in Nevada was a kid with poise against an NBA-heavy Nigerian team and someone that could match up on players like Joe Ingles and Matisse Thybulle in training scrimmages and not look over-awed.

Bleacher Report, who have 9.9 million followers on Twitter, felt Memphis were eyeing the Australian and said “he has special passing instincts and IQ, but he could use a better athlete and explosive driver like Morant to play alongside.”

Earlier this week on the Lowe Post podcast ESPN analyst Jonathan Givony said Giddey is “probably the guy with the highest IQ in the draft besides Cade Cunningham” and is “elite at doing all the little things — cutting, getting deflections, blocks, rebounds, making every pass in the book, every read you want out of pick-and-roll.”

Dime Magazine put Giddey on its front cover where he got to explain his playmaking abilities in more depth.
“It’s my favourite thing to do on the court,” he told the magazine.“I can see things happen before they actually happen.I can tell the pass before the pass is made. That’s an advantage for me because as a bigger guy I can read defences and I can see over defences.”

Giddey’s journey started in the NBL and he quickly made a name for himself as an efficient ball handler, a triple-double threat who can whip the ball over his head like a penalty kick in soccer.

Giddey will have to hit the ground running. The new NBA season is just around the corner. Earlier this week they announced key dates with the regular season kicking off on Oct.19 through until Apr.10, 2022. Free agency starts Aug.2 at 6 p.m. ET. The Las Vegas Summer League is back (Aug.8-17). And the play-in tournament will once again be a feature where teams that finished 7th through 10th in each conference will try to claim No.7 and No.8 seeds.

Boomers stalwart and Utah Jazz sharp-shooter Joe Ingles, who has been mentoring Giddey and watching his games, was asked by media ahead of the draft how he thinks he’ll fare in the NBA.

“The other stuff, like getting quicker laterally on the defensive end or shooting the ball or pick-and-roll situations, he’ll learn all that and pick it up so quickly because of his IQ,” he said.