The men who pride themselves on growing up to play cricket and earn a baggy green flew off to Sri Lanka, where the Aussies had not lost a Test series since 1999; I wasn’t even born then!

As for Steve Smith, it was the perfect way for him to continue building as Test skipper. Having won home and away against New Zealand, alongside a home series win against a depleted West Indies, Australia were heading to Sri Lanka as favourites.

Sri Lanka were coming off a woeful tour of England with fingers being pointed at Angelo Mathews by the Sri Lankan board (as they have done so since 2015).

In a tour game against a Sri Lankan XI, the Australians won by an innings, courtesy of Steve O’Keefe taking a ten-for in the game alongside a handy 78 not out batting at No.8.

Everything was looking bright for the Aussies while doom and gloom was set to continue in the Sri Lanka camp.

The first Test in Pallekele started brilliantly for Australia.

Having been sent into bowl first, Australia’s bowlers ran riot. Only two Sri Lankan bats scored 20 or more as the Lankans were skittled for 117.

Despite Australia losing their openers early, Steve Smith and Usman Khawaja took Australia through to stumps on day one at 2-66. But this is Australia on the subcontinent – where’s the collapse?

Smith realised a collapse was inevitable so he got himself stumped to Rangana Herath less than two overs into day two and the rest of the Aussie line-up decided not to dig in as well. The result? Australia failed to get a big first innings total, bowled out for 203.

Sri Lanka forgot how to bat on dry wickets until a young Kusal Mendis came in.

Instead of blocking for the sake of it, the youngster showed intent and what came as a shock to the Sri Lankan selectors, Sri Lanka refused to collapse like they did in the first innings.

The lower-middle order gave great support to Mendis, who scored his maiden Test century (finishing on 176) with Sri Lanka bowled out for 353.

Australia were tasked to chase a target of 268 on a raging turner and Sri Lanka boasted a spin trio led by Rangana Herath. We all know how this will end.

Smith scores a fighting 55 but Herath, Dilruwan Perera and debutant Lakshan Sankadan have the Aussie bats dancing to their tunes as Australia slump to 8-157.

An injured Steve O’Keefe showed more fight than the majority of the Aussie top six, alongside Peter Nevill, but it was not enough to draw the Test as Sri Lanka won by 106 runs – Steve Smith’s first loss as skipper of the Aussie Test team.

To make things worse, O’Keefe is ruled out for the remainder of the tour. So, who do the Aussies have in the squad ready to line up for the second Test as Nathan Lyon’s spin partner?

No one, because why take more than two frontline spinners for a Test tour of the subcontinent?

Victorian Jon Holland is forced to renew his expired passport ASAP after being called up into the Australian squad.

With the Galle wicket putting Nagpur pitches to shame, Holland was handed a debut. Sri Lanka batted first and counter-attacking 50s from Angelo Mathews (54) and Kusal Mendis (86) helped Sri Lanka post a competitive first innings total of 281 (could have been more if Mitch Starc did not take 5-44).

Then Australia forgot how to play spin for the umpteenth time and collapsed to 106 all out, while gifting Rangana Herath his second hat trick in Test cricket.

Sri Lanka continued to roll with the punches as Dilruwan Perera scored 64 batting at No.8 as none of the Aussie bowlers bar Mitch Starc were effective on a bowler-friendly wicket. 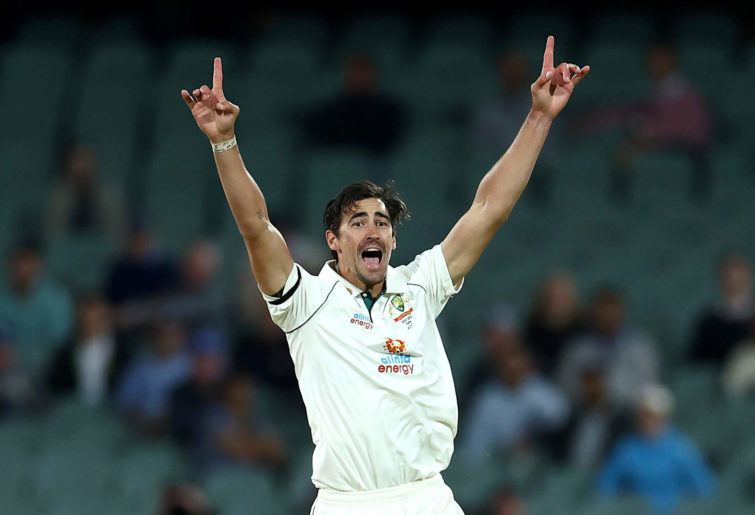 Sri Lanka were bowled out for 237 and Australia were tasked with chasing 413 to save the Warne-Muralitharan Trophy.

If you have read this far alongside reading the headline, it’s fair to say you’ll know how this ends.

Herath and Perera bowled 84 per cent of the overs Sri Lanka bowled in the second innings, rolling out Australia for 183 as Sri Lanka won the Warne-Muralitharan Trophy for the first time since *checks notes*… in their existence.

Come the third Test, Australia made two changes – Joe Burns and Usman Khawaja out for Shaun Marsh and Moises Henriques.

The new faces confused the Lankan batsmen as they collapse to 5-26 in the first session of day one. But a wonderful resistance from Dhananjaya De Silva (129) and Dinesh Chandimal (132) ensured Sri Lanka were all out for 355.

However, Australia wanted to show Sri Lanka that a batting collapse can last longer than five wickets as Australia were bowled out for 379 – a first innings lead of 24 runs.

Sri Lanka found themselves in a spot of bother at 4-98 before the Aussie bowlers minus Mitch Starc took their feet off the gas once again.

Kaushal Silva (115) alongside Dinesh Chandimal (43) and Dhananjaya De Silva (65 not out) revived the Sri Lankan innings with Sri Lanka declaring at 8-347, teasing Australia to chase down 324 on a fifth day pitch.

Shaun Marsh and Warner started off the Aussie innings well with Australia going to lunch on day five at 1-77. And then came the final nail in the coffin.

Everyone in the Aussie line-up forgot how to play spin (or maybe they just never knew what a turning ball was) in a monumental, drumroll please – collapse, losing nine wickets in less than 23 overs with Sri Lanka winning by 163 runs.

Sri Lanka went into this series with a quartet of fast bowlers either partially not available or ruled out for the whole series. Add in a culture of losing for the last 12 months, and the Sri Lankans must have forgotten how to beat a major nation in a bilateral series.

Yet, Angelo Mathews found a way to lead his boys and efficiently destroy Australia through the use of his spin trio.

In Australia’s rotten series losses in UAE and India, there were a few excuses put up for the thrashings in 2013 and 2014. But they were valid to an extent, due to the fact that winning in India and the UAE against the sides the home teams had put up was tough.

There was no excuse for what happened in Sri Lanka, however. Picking two frontline spinners and leaving out Glenn Maxwell for a tour of the subcontinent was the beginning of a horror tour while two seam bowling all-rounders were picked.

The unloseable series had somehow been lost and as the future would hold, this was the beginning of Steve Smith’s downfall as Australian Test skipper.

Once again, the questions of how Aussie batsmen would play spin were brought up and in due time, this was the wake-up call Australia needed on the subcontinent.

With the teams both sides had, there was no way Australia should have lost that 3-0. Yet the Aussies found a way to embarrass themselves even more than the homework saga of 2013 did.